We received our first market-ready VR headset at Madrona almost one year ago now, and since then, we have done VR (Vive and Rift) and AR (HoloLens) demos for over 100 people who have stopped by our office to check out the next big computing platform. We have done demos for kids, parents, grandparents, pro football players, elected officials, company executives, gaming enthusiasts, people who never game, and people all over the spectrum from skeptical to extremely excited about VR. We have also participated in over 50 unique VR/AR demos from companies pitching Madrona. 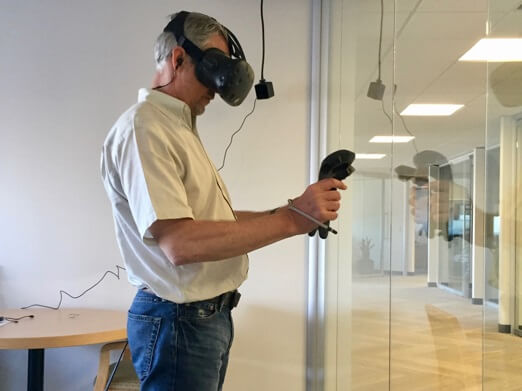 After all of these demos, it’s interesting to take a look back and think about what consumers’ first reactions to the products and content have been and where we think the companies betting on the future of VR need to go from here. Here are some of the key takeaways from our first year in VR:

1. It’s here. And it’s awesome. Every person to try on the Vive has been blown away by the level of immersion and the experience of getting transported to another place. While companies are still debating controllers, tracking, resolutions, and wires, there is no doubt that the technology is now ‘good enough’ for people to feel completely immersed in another world. Seeing someone’s fear of falling off a ledge suspended a few hundred feet above a city when they are in fact just standing on the carpet in your office is incredibly fun and proves that VR is a transformative experience.

2. But not quite awesome enough. Despite the incredible experiences that people are having in VR, consumers are not excited enough to go out and buy headsets. We’ve done over 100 demos, and less than a handful of people were excited enough to go out and spend $600-800 for a VR setup and likely another $1,500 for a capable PC to play with VR at home. Maybe we aren’t selling hardware hard enough at Madrona, but our experience seems consistent with the overall industry, with the big VR companies coming in significantly below their initial 2016 forecasts for hardware sales. For example, Sony cut its 2016 forecast for VR headsets from 2.6 million units to 0.75 million. Further, we know first-hand how cumbersome it is to update software and firmware in order to quickly and consistently enjoy most VR applications.

3. Companies are earlier adopters of VR and AR than consumers. Nearly every corporate innovation lab has taken the time to create some sort of VR experience. IKEA built a kitchen visualization tool, Ford released an app that lets you experience what it’s like to be a race car driver, and even SleepNumber built a VR application … to simulate what it feels like to be tired (in case you haven’t felt that before!). We are also seeing early adoption of Hololens AR technology and demos especially in health care, financial services, and various forms of design. Companies are seeing the huge potential of VR and AR and quickly trying to determine what works and what doesn’t to advance their business objectives.

4. The first killer app will be social. The VR (and potentially “mixed reality”) apps that people will spend the most time in will be social. Humans have an innate desire to be social, and tools for communication are incredibly valuable — just look at Facebook, Instagram, Snapchat, WhatsApp, Skype, and Slack. Additionally, VR is a platform that is particularly well-suited for communication given the level of immersion you can experience when talking to other people. Early examples of companies with compelling social VR capabilities include Against Gravity’s Rec Room, BigBox’s Smashbox, and Pluto VR’s general mixed reality communications service. 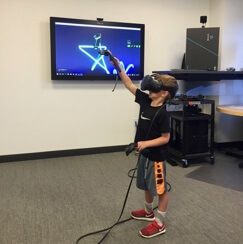 5. Wow — Kids! The one thing that’s been the most remarkable to watch is how easily kids pick up VR controllers and start flying around virtual worlds (before asking if they can play Minecraft in VR). We know some kids who have spent dozens of hours playing social VR games like dodgeball and charades. The level of comfort and intuition children have for navigating new technologies is incredible, and they will likely be able to imagine new ways to use VR that the current generation of developers hasn’t even considered yet. Interestingly, the younger folks who try both AR and VR tend to be more interested in VR, while older folks see more commercial promise in AR.

6. Learning from Asia and 21st century “arcades” – The U.S. is way behind China for VR adoption, and we are seeing significantly more adoption in the Asian market through malls, theme parks, karaoke bars, and gaming cafes – not to mention the number of manufacturers of simple smartphone headset adapters that allow for a low-end mobile VR experience. We believe that, in the short to medium term, 21st century VR arcades will emerge around the world with the early learnings coming primarily from Asia. HTC is treating the China VR market as its first priority even though it is partnered with Valve on the Vive. And Tencent has begun producing VR movies. U.S.-based VR companies are looking to learn from the Chinese experience, and they are also looking to Asian investors to fund VR companies, as a large number of VR investments have been led by Asian investors. In fact, a recent CB Insights report showed that China-based investors participated in 21 percent of all AR/VR deals last year, including Magic Leap’s $794 million Series C (Alibaba) and NextVR’s $80 million Series B (five Chinese investors). 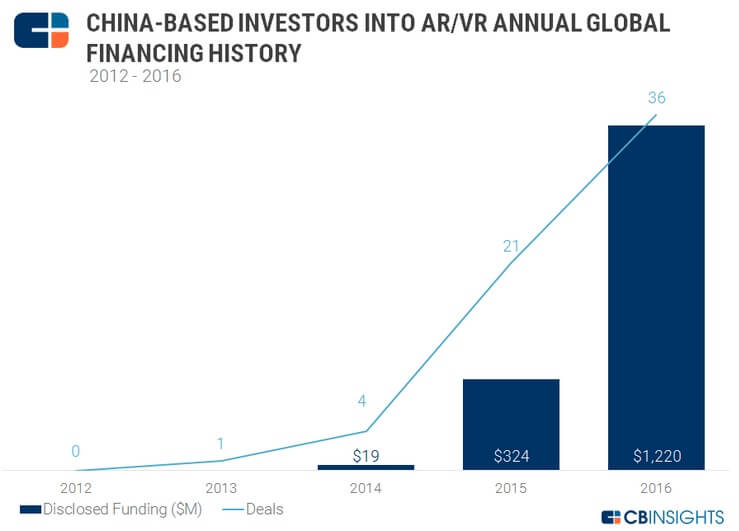 7. Companies and investors are waiting for a big breakthrough. Perhaps it will be Apple’s first foray into AR/VR. Maybe it will be mass adoption of the Google Daydream. Or maybe a wild success in Snapchat spectacles. But until something spurs a bigger user base, AR/VR companies will not be making a lot of money. Monetization is tricky, and with the exception of some early wins in indie games, companies do not have a lot of room to experiment with business models to grow their businesses. Even what is arguably the first “hit” of the AR world, Pokemon Go, required a beloved set of content to help create a global phenomenon. That makes it important for early-stage VR and AR companies to ensure they have a plan to survive and continue developing great products until the early majority are more easily able to try VR/AR experiences. 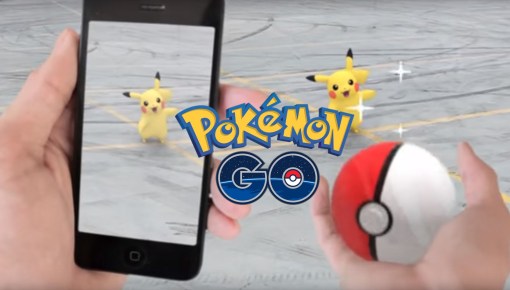 8. VR/AR signal a new era of human-computer interaction. Traditional text interfaces and GUIs force people to interact with data and applications in a way that makes sense to computers. VR and AR are new, natural user interfaces that will allow people to interact with technology in the same way they interact with the physical world. That means using voice, vision, and gestures to interact with computing and content. Think about how difficult it is to remember the positions of 100 different files on a shared drive and how comparatively easy it would be to say “show me the document from last week’s meeting with Sally” and have it appear in augmented reality. This will allow us to build new apps that take advantage of the ways our brains work and interface with both the digital and physical worlds.

We are incredibly excited to see what happens in the next three to five years in the virtual and augmented reality market. Already, we are seeing great examples of profitable businesses creating VR demos of buildings before they are built, so developers can sell real estate before prospects can walk through the space. We are also seeing partnerships with groups like Microsoft, Case Western Reserve University, and the Cleveland Clinic where medical students can put on a HoloLens to walk around and examine the different pieces of a human heart in 3D space and gain completely new insights on how the heart really works.

As we look towards the technologies that will affect humanity the most over the next decade, we firmly believe augmented and virtual reality will change the way we work, play, and live.