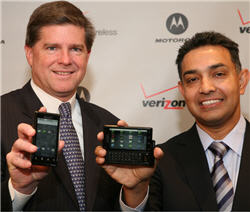 How many Droid phones has Verizon sold? It depends which respected industry analyst you ask.

Telecom analyst Mark McKechnie from research firm Broadpoint AmTech told Bloomberg reporters that Verizon began sales with 200,000 units in stock last weekend, and that most stores had sold roughly half their stock. That multiplies to 100,000 units sold. (Mark is not pictured at right. These guys just had the best Droid team spirit in a Google image search.)

The number is impressive, but the sales it doesn’t touch Apple’s million-unit first weekend for the most recent model iPhone — and remember, the Droid phone, which is the first device using Google’s Android 2.0 operating system, had literally been advertised as the anti-iPhone.

Consultant Michael Cote, whose Cote Collaborative works on market strategies with handset makers and wireless carriers, says McKechnie, with all due respect, “is off by a factor of four.” 400,000 units puts the Droid to within striking distance of the iPhone for the next round of updates for both phones. That would be cool, because admit it, watching the iPhone beat up all other phones on the planet combined was getting pretty dull.