Password-management company 1Password has launched a full-fledged desktop app for Linux machines. The company introduced the app in beta last October, but now it’s available for one and all.

Although 1Password is well-known in the consumer sphere, the Canadian company has been doubling down on its enterprise efforts, enabled in part by its mammoth $200 million funding tranche two years ago. It has launched data breach reports powered by Have I Been Pwned, for example, while recently it expanded into secrets management to secure businesses’ critical infrastructure.

The company boasts of big-name customers such as IBM, Slack, Dropbox, PagerDuty, and GitLab.

On the surface, a Linux launch would appear to be more of a niche consumer play, but in fact the new app is “the latest step in our commitment to enterprise,” 1Password CEO Jeff Shiner noted in a press release. Although Linux only has a tiny overall market share in the desktop computing sphere, a Stack Overflow survey last year found that more than a quarter of developers use Linux as their primary operating system. Indeed, 1Password itself said that it has seen significant demand for a dedicated app for developer operations (DevOps) and IT teams in major organizations.

Given that Linux is super customizable, and it remains one of the most popular systems for web servers, this might go some way toward explaining why developer teams might prefer to work from a native Linux environment.

It’s worth noting that 1Password has been available in the browser since 2017, opening the service to Linux users through Chrome or Firefox, while in 2018 it arrived in the command line interface (CLI) to enable IT teams to leverage 1Password anywhere. Today’s news puts Linux on an equal footing to its Windows and Mac counterparts, giving all Linux users access to their 1Password-hosted data anywhere, regardless of whether they are online or not.

“We’ve been working towards this day for some time now,” 1Password cofounder Dave Teare told VentureBeat. “1Password for Linux, twinned with secrets automation, now completes the circle for Linux users — offering the same experience that customers on Mac and Windows have enjoyed previously, and adding in the tools needed to manage secrets whether they are needed by a human or machine.” 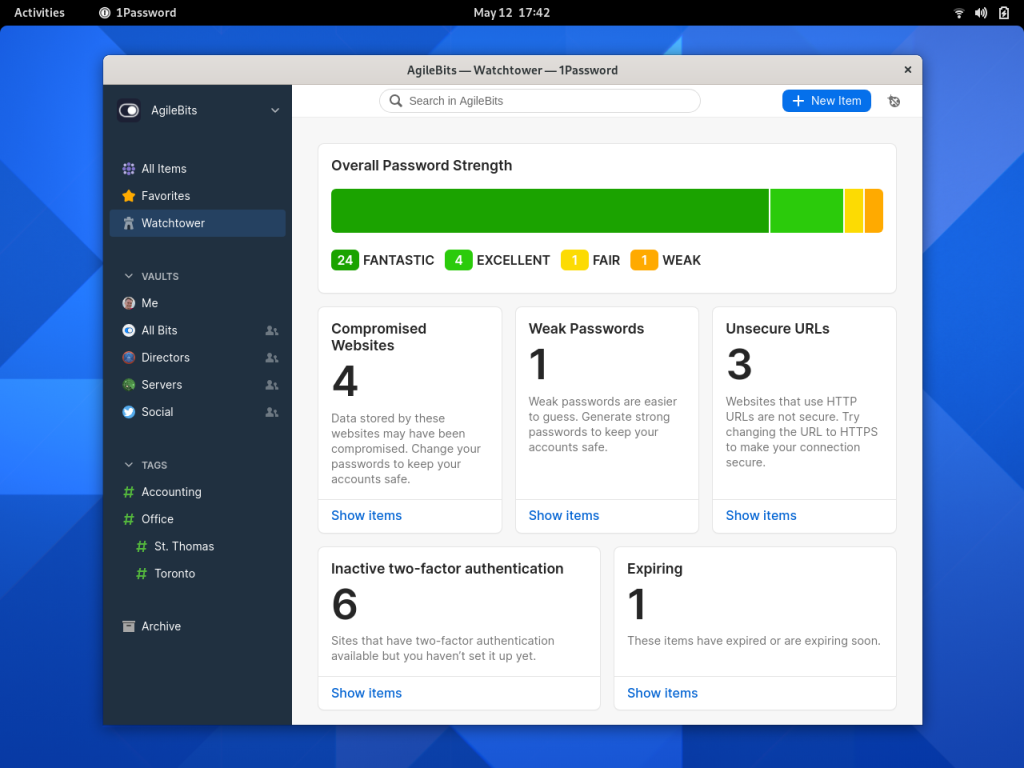 Above: 1Password for Linux: “Watchtower tells you about password breaches and other security problems with the items you have saved”

Although 1Password itself isn’t an open source platform, throughout its 16-year history the company has sought to align itself with the open source community by contributing to projects and also giving away free accounts to teams working on more than 250 open source projects. Coupled with the fact that Linux is so prevalent across the developer fray, it’s somewhat curious that it has taken 1Password so long to launch a native Linux desktop app.

“A Linux application is one of our longest requested features, and one that we are now happy to be able to deliver,” Teare said. “We have seen an increase in requests from our business customers for a Linux application to allow for full coverage of an enterprise environment, and so we have answered that request.”

Keeping to the spirit of Linux’s open source foundation, 1Password also said that it developed the new platform with the “open source community in mind,” using technologies such as Rust (programming language), Electron (framework for developing desktop applications using web technologies), and the ring crypto library for end-to-end encryption. Teare said that it will lean on these technologies across its product suite in the future.

“We have always used the latest and greatest technologies to build and secure 1Password — our Windows and Mac apps will take advantage of these technologies and more in upcoming releases,” he said.