In the glamorous world of mobile technology, battery charging is a bit of a Cinderella. This is in spite of the fact that power is a major issue for most users of mobile technology, especially as phones get more sophisticated and power-hungry. Mobile carriers are also effected, since users conserve the battery by using the phone less. At the Mobile World Congress conference in Barcelona this week, two startups showed off products that address the dead battery problem.

PowerKiss sees the greatest need for the product in public places like airports or conferences. The company is working with several Finnish and European office furniture manufacturers to embed the transmitters, which cost around 330EU list price but will be considerably cheaper wholesale and in volume. The receiver costs around 10 EU list price.

Pilots have been running at multiple locations in Helsinki airport and cafes in the city where the charging service has proved to be popular. PowerKiss has also demonstrated prototypes for laptop charging. The company was founded in 2008, has 12 employees and is funded via a combination of angel investment and a government-backed VC fund. The first PowerKiss product was released in December 2009. 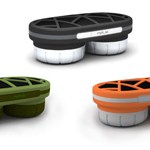 MyFC (My Fuel Cell) is a Stockholm-based green tech company that tackles the problem of charging when no mains or battery power source is available. Typical examples of users are hikers or workers at an off-grid location. A fuel cell is an electrochemical device that transforms the chemical energy of a fuel (hydrogen, methanol, natural gas, gasoline) and an oxidant like air into electrical energy. Fuel cells have many similarities with batteries, but no electrodes are consumed in the fuel cell process. A fuel cell will run as long as fuel and oxidant are provided to the electrodes. The hydrogen fuel cell (pictured) supplied by MyFC is activated by inserting a fuel packet that looks like a teabag into each of the two sections of the holder. When water is added, charge is generated and the fuel cell can be used to charge any device with a microUSB charger. The only byproduct is some water vapor.

The output power range of the fuel cell is 3 watts, and 2 fuel packets give a charging time of 1-1.5 hours. The fuel cell costs around 10 dollars and lasts for around 4 years; the fuel packets are 5 cents each. The main competition is solar-powered charging units, but MyFC says that a lot of sunshine is required to get enough power to charge a phone. MyFC was founded in 2005 and is privately funded.