Performance marketing company Nanigans released a study today showcasing that Facebook advertising is alive and well, with retailers seeing a 375 percent explosion in click-through rates from Q3 2012 to Q3 2013 — and healthy 152 percent return on investment.

Cause of the massive growth? Facebook’s shift to in-newsfeed ads.

“Facebook is the place for proven reach and ROI,” Facebook’s own Michael Randall said in response to the survey, perhaps unsurprisingly.

But Nanigans SVP Dan Slagen agrees, pointing out something very new — and very welcome — in terms of social media marketing:

“Just 12 months ago we really weren’t having ROI conversations about social marketing in general,” Slagen told me on the phone today. “And now we’re talking about Facebook in terms of performance marketing!”

A majority — 57 percent — of retailers’ spend on desktop Facebook ads is delivered in the news feed, an ad type that Facebook enabled to some controversy in March of this year. For both advertisers and Facebook, it’s been an unparalleled success, with one study in June reporting 49 times the clicks at half the cost of the social network’s righthand-side ads. But Nanigans’ new numbers indicate that today, while news feed ads still massively outperform righthand-side ads, with 28 times the clicks, righthand-side ads actually have higher return on investment.

In other words, if you want massive attention, advertise in the news feed. If you want to optimize for profit, lean toward the righthand-side ads.

But clickthroughs aren’t the only numbers that are up — costs are, too.

Cost-per-thousand (CPM) impressions for retailers advertising in Facebook are up almost as much as clickthroughs: 271 percent. Today, they’re $.89, while in 2012 they were just $.33. Interestingly, Nanigans, which is one of the largest ad buyers on Facebook, sees a big 37 percent spike in ad costs during the last month of each quarter.

“This is likely due to heightened demand for inventory at this time as brands and agencies rush to meet quarterly volume goals,” the company said.

While CPM costs are up, cost per click (CPC) are down, dropping 27 percent in the last year, and Nanigans says they’re “normalizing” at around $0.45. 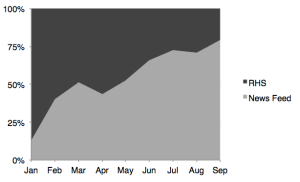 Above: News feed ads are taking over from righthand-side ads.

The most important numbers, however, are not CPM or CPC. Instead, they’re ROI. If retailers are making money advertising, they’ll do it regardless of the cost. And according to Nanigans — which, of course, sells Facebook ads — ROI is at 152 percent, meaning that every dollar spent on Facebook advertising generates $1.52 in sales. And that number, Nanigans says, is low, because the report date range cuts off some sales that will still be attributable to ads that were shown in previous months — advertising in one month, in this case September, will often result in some sales still in the next month, in this case October.

And ROI is all about targeting the right person with the right ad at the right time.

“We can get an ad to any human being on the planet,” says Slagen, exaggerating just slightly. “But it has to be one that they take action on.”

From Q1 this year to Q3, the percent of Facebook ads that were delivered to the news feed versus the righthand side grew from just 35 percent to 74 percent, almost three quarters. In September, that was even more exaggerated: 79 percent of ads on Facebook for retailers were in the news feed.

Interestingly, when Nanigans looked at how retailers are allocating their budget on Facebook desktop ads, an ad type that didn’t even exist earlier this year is leading the way: unpublished page posts.

Unpublished page posts are “posts” that are not posted to be viewed organically by those who have liked a brand — it’s an area only used for advertising. From nothing in February, this ad type has exploded to 68 percent in September. Meanwhile, ads that link to an external domain are down from a majority early in 2013 to under 20 percent today. 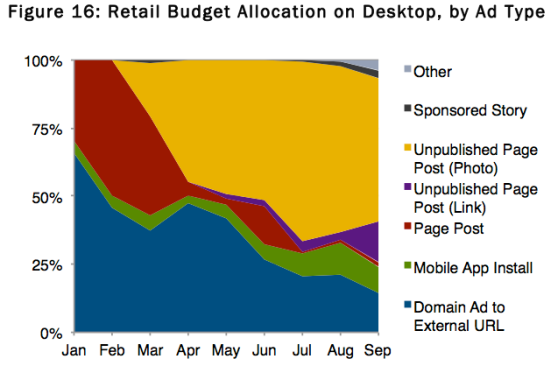 In addition, while Facebook advertisers focus on younger audiences, older Facebook users provide much more return on investment — up to double.

Finally, while advertisers seem to be spending the largest part of their budgets Thursday, consumers are clicking and buying the most on the weekends: Saturday through Tuesday.

Which means that it might be a good idea to re-allocate more dollars to weekend advertising: 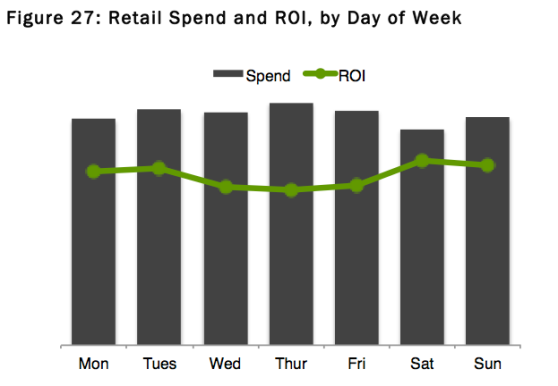 The upshot, says Nanigans, is to spend smart, to not ignore right-hand side ads, and to avoid leaving excess budget to spend at the end of a quarter, when ad prices increase.

In addition, the company warns, metrics like clickthrough rate and cost-per-click are not nearly as important as return on investment, citing as an example that unpublished Page post link ads average 23 times higher clickthroughs than domain ads (ads that take users out of Facebook and to an external website) but have a massive 53 percent lower ROI.

“Incremental sales have become core to retailer Facebook advertising goals, and measuring the true ROI of these efforts is being increasingly demanded,” Marc Grabowski, the chief operating officer of Nanigans, said in a statement. “While every retailer has a unique customer base and their results and strategies vary, we’re excited to offer a benchmark report specific to the sector with meaningful metrics and actionable strategy recommendations.”