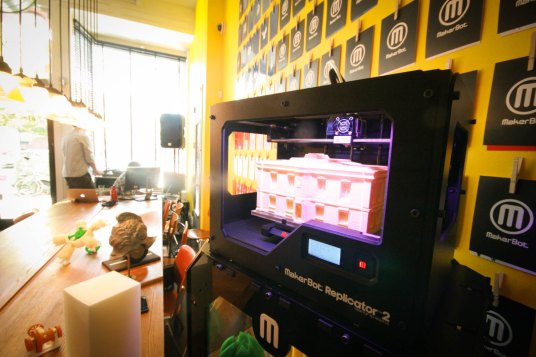 Plenty of amazing things are happening as 3D printing expands its influence into mainstream culture. Not only are lots of 3D printing companies expanding and getting more funding, but enterprising designers are finding more and more ways to use the fledgling printing technology. While some of these uses are a bit troubling (like piracy of copyrighted material and firearms), others show that, with enough ingenuity, 3D printing can change lives. Let’s take a look at some of the industry’s bigger stories from this year.

MakerBot may not be the only company creating 3D printers, but it certainly is the one that does it with the most style. Chief executive Bre Pettis and co. had a pretty eventful 2012: In May, it expanded its operation to Brooklyn’s 16-acre Metrotech Center, which it shares with Empire Blue Cross Blue Shield and Polytechnic institute of New York, among others.

But as big as that move was, MakerBot’s September was even bigger. Not only did CEO Bre Pettis land on the cover of Wired magazine, but MakerBot also announced the Replicator 2 and Replicator X, its newest 3D printers. To top it off, MakerBot also launched its very own storefront in Manhattan, where customers can see for themselves just how far 3D printing has come this year. 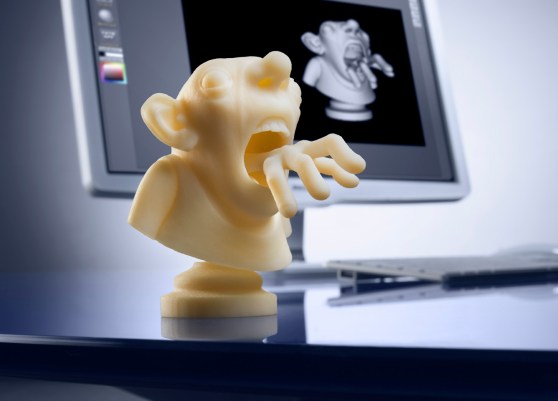 If MakerBot is going after your desktop, Shapeways is targeting just about everything else. The 3D printing service offers its customers the capability to upload their designs and have them printed out in a variety of materials, including food-safe ceramic, then sent to them in the mail.

It’s a brilliant business model, and it’s worked out pretty well for Shapeways this year. In June, it raised $6.2 million, funding that became vital when Shapeways opened up its new Queens, New York printing factory in October. Equipped with 50 industrial  printers, the factory can generate millions of products a year. The move, like MakerBot’s expansion, is proof that the 3D printing industry is growing — and quickly.

Bringing 3D printing to the bedroom

No story this year quite encapsulated the “make anything” nature of 3D printing this year as our feature on the future of 3D printed sex toys. Using a 3D printer, designers can dream up and manufacturer sex toys that fit the exact specifications that customers want — an enabling, democratic force that rivals VCR in its personal applications.

One startup, New York Toy Collective, takes that capability a step further: Using 3D photography, the team is even able to make anatomically correct replicas of its customers’ genitals. The future is here and it’s … well, sexy.

As with any new technology, it hasn’t taken long for people find more dangerous applications for 3D printing. One of the more notable examples came in August, when hobbyist Michael Guslick used a 3D printer to create many of the parts for a homemade .22-caliber rifle.

While limited in its scope, the project shows that 3D printers won’t just disrupt manufacturing, but law enforcement and gun control as well. How can you prevent people from buying things — in this case, guns — that they can create in their own homes?

Fortunately for civil society, consumer-grade 3D printers are still unable to print in sturdier materials like metal, which thankfully prevents them from printing entire weapons — at least for now.

Online piracy has created a lot of headaches for media and software companies, and the Pirate Bay plans to bring the pain to makers of physical objects as well. The torrent site’s new “Physibles” category enables people to upload 3D designs, which anyone with a 3D printer can print out in their own homes. While the move might seem pretty insidious, The Pirate Bay points to more noble motives: “The benefit to society is huge. No more shipping huge amount of products around the world. No more shipping the broken products back. No more child labor,” the site wrote announcing the addition.

Few technology stories are as legitimately powerful as the one of Emma, a 2-year-old born with a condition that prevents her from moving her arms. But with the power of a Stratasys 3D printer, a Delaware hospital was able to create a plastic exoskeleton to give that ability back to her — and break your heart in the process.

“[Additive printing]  is one of those industries that matches perfectly with 3D printing, because we need custom everything,” research designer Whitney Sample says the video. 3D printing severely cuts down on both the wait time and costs of medial prosthetics. Rather than take patents’ measurements, send them to a company, and wait for the prosthetics to arrive, hospitals can just print them themselves. It sounds fanciful, but as the video above shows, it’s already being done.

One of the likely future models for 3D printing looks a lot like the print centers of today, where you go to a shop in order to get your printing done. So it’s no surprise that Staples is trying its hand at the technology. With its new “Staples Easy 3D” program, the company will enable its customers to upload their 3D designs (like this creepy face) and have them printed out in-store. The model is similar to that of Shapeways, but with one main exception: Staples is a huge multinational company, which automatically gives it a reach that’s not yet available to the comparatively small Shapeways. The one drawback with the Staples program is that it will be limited to Belgium and the Netherlands, at least at first.