Although Nintendo’s spend for 2019 (est. $46 million) was less than half that of both PlayStation and Xbox its ads generated 3.07 billion TV ad impressions — which goes to show that spend and impressions don’t always go hand-in-hand. The key difference? The relative cost of advertising during programming that companies prioritized.

“Many developers are shifting their focus towards releasing more massive gaming experiences, which means fewer releases overall,” said Ed Tomasi, the cofounder and managing director at esports lifestyle company Subnation. “While the community can still expect cyclical sports releases like NBA2K, FIFA and Madden, this overall move towards the franchise model with additional transmedia experiences similar to the film industry will most likely result in a more drastic fluctuation of advertising spend on a year by year basis.”

Unsurprisingly, the gaming industry overall spent the most on sports programming, with the NFL leading the way (estimated $61.2 million, a 14.62% increase from 2018) — almost twice as much as the NBA and three times as much as college football. But in fifth place for programming with the biggest outlay is SpongeBob SquarePants — driven mostly by Nintendo, which spent about $7.08 million advertising during the kids’ series. By comparison, the second-place brand for spend during SpongeBob was Warner Bros. Games with a relatively modest $283,000. 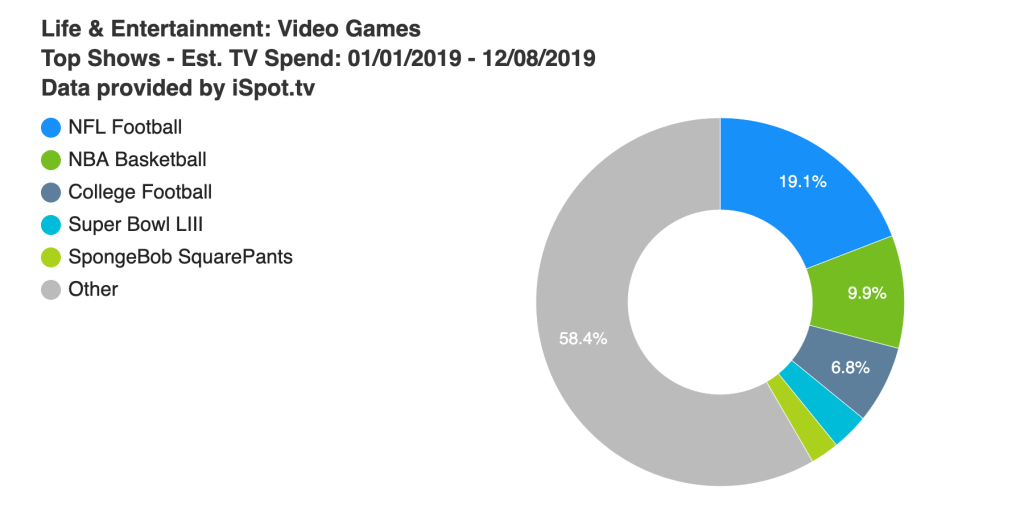 Looking at impressions, the list is similar but a new name pops up at No. 3: SportsCenter. And darling SpongeBob still makes the top five for programming that attracted the most eyeballs for video game advertising. 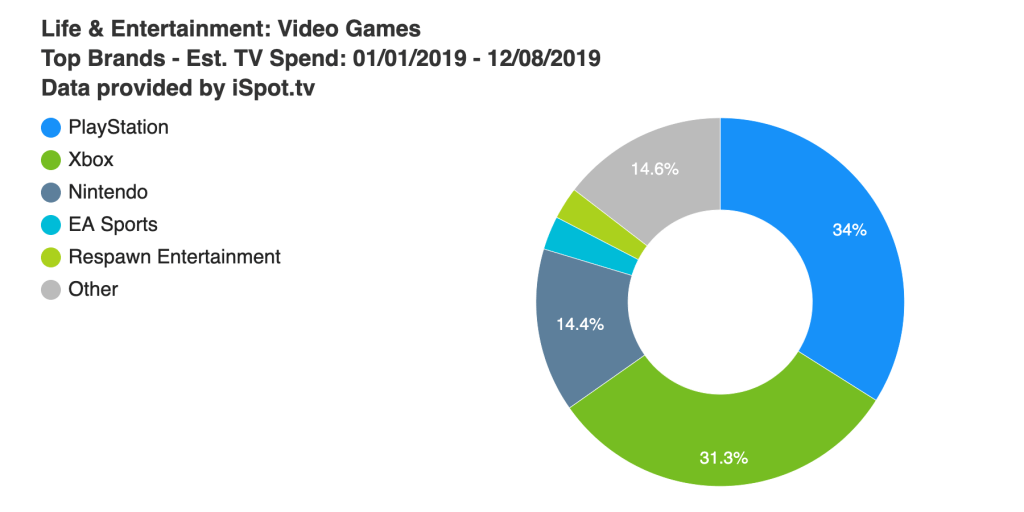 Xbox had 2019’s most-seen gaming industry ad, which also had the biggest budget this year: a promotion for Gears 5, featuring music by Evanescence, which hit TV screens for the first time in early September. It’s the only industry ad with over one billion TV ad impressions, and Xbox has spent an estimated $22.7 million on its 2,948 airings. And although it aired most frequently during SportsCenter (275 airings), MLB Tonight (269 airings) and MLB baseball (130 airings), it received the highest impression-counts during NFL football (362.8 million TV ad impressions) and college football (100.2 million). This ad also has captured viewer attention for Xbox, with an iSpot Attention Index of 141, meaning it’s received 41% fewer interruptions than the average video game ad.

PlayStation’s top ad for spend ($18.8 million) and impressions (754.5 million) spotlights PlayStation Now and has aired over 2,000 times, with 226 airings on SportsCenter — but, once again, we see NFL football take the lead for generating impressions (90.3 million). It sports an iSpot Attention Index of 136 (36% fewer interruptions than the average video game ad).