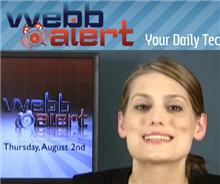 Morgan Webb, who has been in the world of Tech-related TV for years, has just launched her own video news blog, called Webb Alert, and she’s got the makings of a star.

If those can do it, Webb Alert can, too.

This morning, Webb covers Rupert Murdoch’s purchase of the Wall Street Journal, Google’s dealings with the FCC, Disney’s $700 million acquisition of Club Penguin, the crackdown on people who make illegal chips for video game consoles, and more. She never slows down, her delivery is clear , intelligent and unpretentious, and she doesn’t waste any words. Oh, and she’s beautiful, too. Would we have mentioned her appearance if she were a handsome guy? We’ll never know.

Rob Reid, Webb’s husband runs the business side. He told us it’s going to be about 70 percent tech news, and 30 percent tech society & lifestyle pieces. On the news side, he said they’re likely to cover things like Google bidding on the 700Mhz spectrum or a fund-raising by Joost.