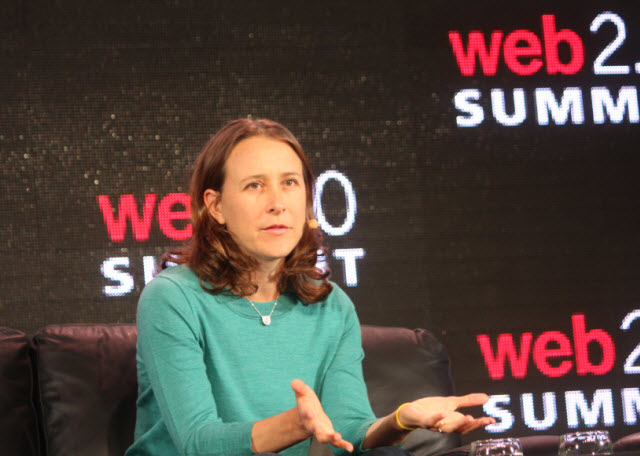 Anne Wojcicki, chief executive of genetics firm 23andMe, said today that her company has been able to find a way to attack a rare form of Parkinson’s disease that her husband, Google co-founder Sergey Brin, is susceptible to.

At the Web 2.0 Summit in San Francisco, Wojcicki said that genetics information that her company has collected from volunteer subjects has yielded some useful information about diseases and our genetic predisposition for getting them. So far, in two years, the company has collected genetic data on 125,000 people. Of those, 6,000 are susceptible to Parkinson’s disease. And of those, 200 are susceptible to the rare variant known as LRRK 2 (pronounced “lurk 2”).

Of the people who are susceptible to LRRK 2, not everyone has the disease. Wojcicki said her team has tried to figure out why and if changes in lifestyle, environment, or diet could affect the outcome. While many people are spooked at the notion of finding out their genetic heritage and what could kill them, Wojcicki said it is time to overcome our fears about that, gather the data, and use it to find out how to avoid killer diseases.

“I grew up interested in this notion of nature (genetics ) vs nurture (environment),” she said.

Wojcicki said that she started the company to disrupt the existing healthcare system, that focuses on treatment, which is expensive, rather than prevention, which is much cheaper.

“It’s about how we can use our data and change how we are approaching healthcare, research and drug discovery,” Wojcicki said.

23andMe is offers consumers the ability to spit in a cup and, after the DNA analysis is done, get back a sequence of genes that amounts to a digital family history for $999, for 50 million pieces of data. For 1 million pieces of data, you pay $99. A genome is the genetic information in your DNA. An exome is the parts of DNA that are recipes for proteins. 23andMe can make those exomes — with tens of millions of bits of information — available to people. Just a year ago, this kind of data would have been 10 times more expensive. Thomas Goetz, the Wired editor who interviewed Wojcicki, said that “Moore’s Law for genetics” is moving forward. That is, cheaper and cheaper computing power it making it less costly to sequence genetic information.

Wojcicki said that her company is now collecting huge amounts of data on people with genetic predispositions for certain risks and will be able to give that data to researchers so they can come up with treatments.

One of the obstacles is that people find this spooky, because they don’t want to know what will possibly kill them. But Wojcicki says her company has created videos teaching people who genetics is not fate and that there are things you can do to deal with predispositions to prevent yourself from getting a disease.

Brin, for instance, has started drinking coffee and is doing other things to make sure that he can avoid Parkinson’s. Meanwhile, Michael J. Fox, the famous actor who has Parkinson’s, has a foundation that is studying the data and is seeing if it can be turned into a drug. Wojcicki said that her company may have found a “modifier,” or a gene that can inhibit the LRRK 2 form of Parkinson’s. Only one in 10,000 people has the predisposition and Wojcicki says her company has the largest cohort of data on it in the world.

“Until now, the consumer has never been empowered,” Wojcicki said. “We have the potential to own our data. We are all at risk for something.”