You might be forgiven for thinking 2013 was a year of redundant, me-too startups flailing around trying to come up with the best way to gamify wage slavery, deliver butt wipes to your door, or make a buck off the badly misnamed “sharing economy.”

But we’re not here to tell you about all that.

We’re here to tell you about the real innovation that’s been going on this year. In fact, there were a lot of startups — consumer, enterprise, hardware, and health-tech — that got us non-ironically excited in 2013.

This is not an exhaustive list, but the 26 companies here are a good start on reclaiming your sense of amazement at what the tech business, at its best, can come up with.

These companies will be worth paying attention to in 2014. Mark our words. 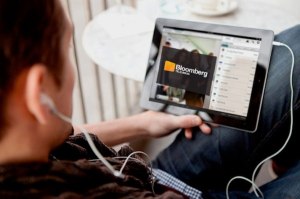 Aereo is potentially the biggest game changer to hit television in a long time. It delivers local TV over the Internet using a clever hack: Each subscriber has a corresponding tiny television antenna at Aereo’s facility. That antenna picks up a broadcast TV signal over the air, digitizes it, and then delivers it via streaming video technology, giving subscribers DVR-like capabilities. Naturally, that has broadcasters in a tizzy, and Aereo is locked in legal battles — which don’t scare it, the company claims. The New York-based company has raised $63 million to date, led by Barry Diller’s IAC.

Cameo aims to do more than just let you shoot bite-sized video clips on your iPhone — its cloud video editing platform lets you turn those clips into two-minute long short films. The goal? To let you share stories, not just repeating clips of your cat struggling to stay awake. It may also inspire a new generation of filmmakers.

Above: Circa app screenshot.

Circa’s news app is one of the most significant attempts to reinvent news delivery for the mobile age that we’ve seen. It brings you the news one small paragraph or photo at a time, giving you the most critical pieces of information first, followed by expanded explanations, photos, interactive maps, and suggestions for related content. There’s also a notification system for breaking news. The San Francisco-based company has raised $2.4 million in seed funding from Quotidian Ventures, Lerer Ventures, Dave Morin, Matt Mullenweg, David Karp, Gary Vaynerchuk, and others.

Cyanogen went from a hacky Android mod to a real startup with some serious money in 2013. Definitely a company to watch. Its CyanogenMod (CM) completely replaces the operating system on your Android device with a custom image sporting a modern version of Android, support for multiple themes, and some tweaks. Geeky, right? But more than 10 million devices are running CyanogenMod. The company announced in September that it had raised $7 million, then followed that up just three months later with a big $23 million round led by Andreessen-Horowitz.

Elepath is a Web product development shop in San Francisco. It’s just launched a brand-new content management system called Exposure that’s built to showcase photos in clean-as-a-whistle layouts that allow for creative, picture-based storytelling. It’s our pick for the best-designed service of 2013. The seven-person company is based in San Francisco and has taken a seed round of funding.

Entangled Media‘s Younity app is a clever tool with lots of promise. Using Younity’s share feature, you share music, videos, photos, and other kinds of files with other Younity users. But they can’t ever download those items — and you can “unshare” the content at any time. It’s kind of like Snapchat for files. The company has just nine employees and has raised $3.5 million to date from Crosslink Capital, Draper Associates, PROfounders Capital, and others.

The last thing the world needs is another second-screen service for TV shows — and yet the TV viewing audience desperately needs Fanhattan. Earlier this year, the company pivoted to become a hardware startup determined to revolutionize crappy cable set-top boxes with its own product, Fan TV. The device, which integrates Fanhattan’s second screen service, provides access to a universal “queue,” or watchlist, of programming from all services, such as Netflix and Hulut — then sends you to those services to watch the content you want. It is far closer to Steve Jobs’ vision for a revolutionary TV product than Apple’s own Apple TV.

A simple image service that was born from community news site Reddit, Imgur has grown into a formidable force across the web. Now more popular than Reddit itself, the San Francisco-based startup has forged its own social community of image sharers (calling themselves Imgurians). Also, Imgur is profitable, has taken exactly $0 in outside funding, and is rumored to be in acquisition talks with Yahoo.

Above: Hellboy comic in Madefire.

Shapeways is a 3D printing service — it can print almost anything you want, including a set of keys. That’s a promising proposition, because despite the wave of interest in 3D printing, there’s still no compelling reason for most people to own a 3D printer. We were entertained by the story of Shapeways and Victoria’s Secret partnering up to make lacey, 3D-printed “wings” for model Lindsay Ellingson, then spangling them with Swarovski crystals. Objectification of women aside, this is a key milestone: A 3D printing startup played a key role in a major fashion brand’s event. Shapeways has come a long way since it started in a Philips incubator in the Netherlands. Shapeways picked up a huge $30 million investment from Andreessen Horowitz in April.