Chat room site IMVU has been quiet for four years. But the company is announcing today that it has more than 20 million members in its online community where people can use 3-D avatars, or virtual characters, to meet in rooms and trade virtual goods.

The Palo Alto, Calif.-based company also says it has the world’s largest catalog of virtual goods for sale, with over 1.5 million 3-D items. Chief executive Cary Rosenzweig (pictured below) says the company has built the equivalent of the eBay of virtual goods. Sales of such goods are generating $1 million in revenue a month for IMVU, which thrives on a so-called “micro-payment economy.” 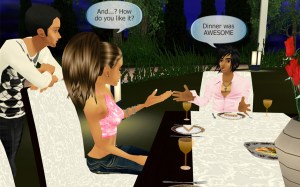 IMVU is now the No. 6 largest virtual world, according to Hitwise’s May data (see chart below). That’s up from No. 8 last year.

The company is the brainchild of IMVU chairman Will Harvey, a veteran game developer whose last creation was the virtual world There.com. Rozensweig says Harvey’s new effort is succeeding because it focuses on the creation of a great avatar and then builds an experience around that avatar. By contrast, There.com and other virtual worlds create an environment and then work their way down to the avatar.

The difference between IMVU and worlds such as Linden Labs’ Second Life is that there is no world in IMVU. There are countless individualized rooms created by the members. (Or they can choose from among 50,000 pre-fabricated rooms). And members interact by visiting the rooms, but there is no virtual world that is physically represented in 3-D graphics. The rooms can grow to become vast forums, although, according to Rozensweig, the company focuses on “one-to-one communication, or small groups.”  One of the big benefits of rooms over a full virtual world is that server costs are much lower for IMVU. Roughly half of the users are female, compared to typical online games that are mostly male. 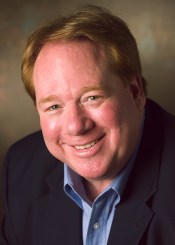 Members of the world create their own 3-D animated characters and equip their rooms with virtual goods. The animations are stylistic, not realistic, but they look much better than rival 2-D experiences such as Sulake’s Habbo. People can chat instantaneously, shop through a virtual goods catalog, play games, talk on forums, and use developer tools.

The world is still in its public beta and only emerged from stealth mode last Friday during a panel that I moderated on user-generated games at the Social Gaming Summit in San Francisco. The company’s investors include Menlo Ventures, Allegis Capital, and Bridgescale Partners. The company has raised more than $20 million in three different rounds. The most recent was an $11 million round in April 2007.

In the next week or two, the company will launch prepaid cards to enable members to buy credits that they can use to buy virtual goods in IMVU. The cards will be available in major retailers such as Target, 7-Eleven, Blockbuster and Speedway. That will help younger people who don’t have credit cards to participate in the world more easily. 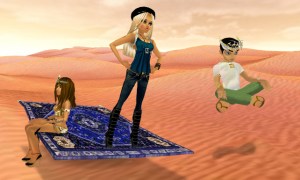 More than two million virtual goods have been created — about 3,000 each day. About 500,000 of those are 2-D stickers that people can use to customize their personal home pages. Other goods include clothes, accessories, pets, and scenes for rooms. People are creating the goods to express their own personalities, Rosenzweig said. (See sample room pictured left).