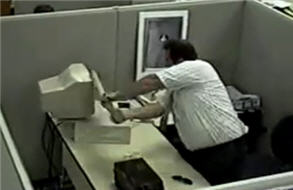 This morning, Google announced Google Chrome OS on the company’s official blog. Chrome OS is a Linux-based operating system with a browser-based interface to everything. Netbooks with Chrome pre-installed will be sold under several brand names in the second half of next year.

In that respect, Chrome OS is competing with the Crunchpad for the Most Popular Unavailable Internet Product of 2009. Both gadgets are aiming at what seems to be a consumer sweet spot for form factors: Bigger than an iPhone, smaller than a laptop, not on sale until next year.

There are plenty of Top 10 Chrome Whatever lists being drawn up right now. Here’s the shortlist for complainers:

1. Chrome evangelists are over-optimistic — Google’s Sundar Pichai and Linus Upson, plus whichever PR manager stayed up late to edit you, all of you get a VentureBeat high-five for your clearly-written post on the Official Google Blog. But my brain tripped and fell when I hit these words:

Google Chrome OS will run on both x86 as well as ARM chips and we are working with multiple OEMs to bring a number of netbooks to market next year. The software architecture is simple — Google Chrome running within a new windowing system on top of a Linux kernel. For application developers, the web is the platform. All web-based applications will automatically work and new applications can be written using your favorite web technologies.

I worked in IT long enough to know that nothing “automatically works.” Many web-based applications will fail on Chrome, even though they shouldn’t.

2. No Chrome for your phone — Chrome OS is not Android, Google’s operating system for phones. The two are separate projects. Android is being developed to work on the smaller screens and keyboards of phones and for small devices up to netbook size. Chrome is meant to be used on the larger-than-a-phone screen of a netbook, laptop or desktop computer. Both Android and Chrome are open-source, so at least we can hope that someone, somewhere will connect the two.

Also, will my BlackBerry and my iPhone sync both ways through my Chrome OS netbook? Right now I get errors on both my Mac and my PC, so I might actually buy a $300 netbook that fixes sync.

3. Google is turning into Microsoft — Google’s engineer/bloggers say they’re going to open-source the code for Chrome, really soon. Back in the old days, they would’ve posted the source first and blogged about it later.