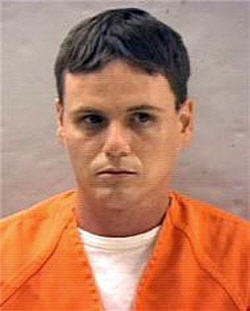 New York attorney general Andrew Cuomo told reporters at a press conference in Manhattan this morning that 2,782 Facebook accounts and 1,796 MySpace accounts had been shut down in compliance with a 2008 New York State law that requires convicted offenders to register their email addresses and online usernames with the state.

The thousands of new shutdowns were made possible because New York now provides much more detailed info on offenders through its e-STOP (Electronic Securing and Targeting of Online Predators) program.

But 3,500 accounts is only a start. To put the sweep in scope, New York state has more than 30,000 registered sex offenders, of whom 8,106 have registered their online info. Yet New York’s population only makes up 6 percent of the total United States. It doesn’t include, for example, Neil Havens Rodreick (pictured), an Arizona man who used makeup and clothes to pass as a 12-year-old boy at local schools. Arizona recently passed its own law requiring convicts to register their email addresses. (The full list of states with such laws: IA, NB, TX, WA, AL, HI, UT, CO, AZ, KS, OK, MO, IL, KY, TN, MS, LA, CA, FL, NC, VA, MD, NY, NH, CT.)

Sex offenders are singled out from other criminals for ostracism because “their crimes, when they do repeat child abuse, are unusually harmful, and their victims particularly vulnerable,” according to a 2008 Wall Street Journal report. Yet the report questioned the widespread presumption that sex offenders are almost certain to repeat their behavior even after being jailed.

I asked Facebook and MySpace to explain to me how this program will scale from one state to all 50. Do they have a plan in place? Is there some national standard in the works? If either company replies, I’ll update this post.

[Update: Facebook director of public policy Barry Schnitt called and told me, “You’ve identified the problem.” Some states, like New York and Vermont, have easily-downloaded data. New York’s new e-STOP info comes in a rich XML format. But other states require site operators to run multiple searches, or crawl the state’s site, in order to get all available listings. The results can often be slim. Yet Schnitt said Facebook has been tracking the entire U.S. the hard way for some time: “What we’ve created in the lack of a national program are tools that crawl all 50 different states.”]

A Federal law backed by the outbound Bush administration, the KIDS Act, makes registration mandatory nationwide. Facebook applauded the law in a blog post, but there’ll be some latency between the law’s passage and the day when all 50 states are caught up with New York on providing the data for websites to use.