Monetizing VR content continues to be a tricky challenge for creators and publishers alike. There’s just hardly any rules of thumb to follow as the industry busies itself with building up a track record of trial and error, and while the addressable market of geared-up users continues to grow. Paid content works in some cases, albeit mostly for premium titles, but it’s not pairing so nicely with mobile VR, which in turn struggles to live on in-app purchases or subscriptions.

In fact, the only model that appears to have found its legs is VR advertising, and it’s thanks to the positive feedback loop that the major players in the space — namely, Immersv, OmniVirt, and Vertebrae — have established with advertisers, who are more than convinced at this stage about what 360-degree VR ads in particular are capable of delivering in the form of pre-roll and interstitial placements before and in between the free-to-play content.

“In any new market, the ability to streamline creative production and content distribution will make it easier for brands and agencies to experiment with new formats,” Michael Rucker, cofounder and COO at OmniVirt, said. “360 VR Video has become the most utilized format for both of these reasons.”

360-degree VR ads represent a particularly sticky model because, first of all, users are well-adjusted to the compromise of paying with their directed attention for a short period of time in order to access worthwhile content. Indeed, as Agatha Bochenek, head of mobile and VR/AR advertising sales at Unity, mentioned in her talk in May at Vision 2017, “almost 80 percent of consumers want ads in exchange for more content.”

“Having options like pre-roll or using ads as content gates allows developers to monetize their work, particularly things like videos or experiences that might not have a good direct channel to monetize. This model is very successful on web platforms like YouTube, so it seems logical that it would work well on VR,” Rob Carroll, advisor and VR developer evangelist at Immersv, said. “I feel that pausing the app content and then showing the ad in a controlled environment is the best way to show ads in VR. It doesn’t require the developer to try and place ads into their world, and it allows the ad provider to make sure the experience the user is having is a good one.”

Secondly, the user engagement levels for 360-degree VR ads are huge compared to traditional digital ads, which makes for an easy transition process for advertisers that are increasingly positioning VR units as a staple in their campaigns. In partnership with Vertebrae, 360 VR ads have even recently been backed as a standardized format by the IAB, the leading authority in digital ad standardization.

“In the early days of VR advertising, 360 video has offered the best reach, and the main reason we worked with the IAB to standardize 360 as a format is because it scales across different headset environments in our network (both pre-roll and interstitial), and onto mobile web and apps (as interstitial and expandable display),” Vince Cacace, founder and CEO at Vertebrae, said.

Above: Snapchat 360° Ad by OmniVirt

In virtually every case study of a 360-degree VR ad, you’ll find that the view-through rates are well over 50 percent, if not exceedingly so. One such case was the KFC Add Hope campaign run by Advrtas in South Africa back in June, where the ad unit hit a whopping 91 percent view-through rate for its 55,000 delivered views. Likewise, in a campaign in which OMD teamed up with Immersv to drive reach and downloads for the “Let Hawaii Happen” VR app, Immersv leveraged its ad network to reach over 50,000 users and converted a smart 25 percent to follow through and download the full experience on the app store. The ad unit achieved a 70 percent view-through rate.

“360 Ads are performing well through our network. We see a view-through rate north of 75 percent and a click-through rate north of 15 percent for these units. 360 Ads represent about 50 percent of our inventory,” Mihir Shah, cofounder and CEO at Immersv, said. “The remainder is our Surround Ads, which are 2D video ads in a 360 scene. These also perform exceptionally well.” 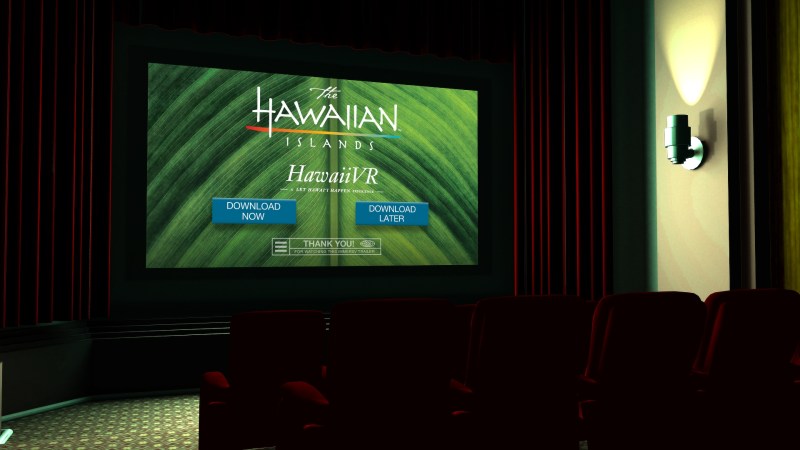 Above: OMD and Immersv team up on the Hawaii Tourism VR/360 Experience

To add another angle to the depth of engagement we’re talking about here, a joint study released back in October by YuMe, Isobar, RLTY CHK, and RetinadVR compared how players responded to pre-roll 360-degree video ads relative to 2D brand logos that are present in-game and 3D interactive product placements that were inserted into the game play. While the conclusion was that, regardless the format, over two-thirds of players found immersive advertising to be highly memorable and less intrusive than traditional digital advertising, 360 VR ads outperformed the other formats by a huge margin.

For example, while the 2D branded logos and 3D objects scored an aided recall of 50 percent and 25 percent on the following day, 360 VR ads achieved 86 percent aided recall. That might not be either surprising or a fair comparison given 360 VR ads are notably more direct and “in your face” compared to the other approaches, it nevertheless offers the kind of exceptional returns that has been critical to convey to advertisers early on so that they have no choice but to welcome VR as a permanent member of the family.

Shah said that Immersv is in fact currently seeing 50 percent month on month growth in demand for their 360 and Surround Ad units throughout their network, which is telling if you had any doubts left that VR is well on its way to becoming a stable ecosystem. I assure you, 2018 will continue to testify to that.

“There is no question that 360 VR ads will continue to be the main way that brands and advertisers are engaging the VR in 2018. The launch of Facebook and Google’s standalone headsets will drive further consumer adoption of the medium and encourage more brands to invest in creative for this space. With 360 VR a staple feature of every major advertising agency now, it is becoming even easier for good creative to be developed in this medium,” Rucker said.

Amir-Esmaeil Bozorgzadeh is a cofounder at Virtuleap, a sandbox for creative developers to showcase their WebVR concepts to the world, the host of the Global WebVR Hackathon, and the startup behind the Gaze-At-Ratio ad metric.