It must be tough being a science fiction writer these days.

With news about a 3D printer winging its way to the International Space Station (ISS), skintight spacesuits, and plans for construction of a space elevator, sci-fi creators must feel like the future is getting too close.

At 1:52 AM ET today, the SpaceX Dragon blasted off from Kennedy Space Center on a cargo delivery mission to the ISS, along with nearly two dozen mice and components for more than 200 scientific experiments.

The deliverables, due to arrive by Tuesday, include a 3D printer designed for zero gravity. Although tech-watchers have been tracking 3D printing for some time, this is the first time such a device is making it way to Earth orbit.

The microwave oven-sized device, developed by a startup appropriately called Made in Space, can create objects up to 2 x 4 x 2 inches and uses ABS plastic. Printing plans for this first test include parts, small tools and containers — the kind of things astronauts might need on a daily basis.

At this point, however, the printer is still Earth-oriented, as it will be controlled from the ground. But it points to the day when humans can make parts and possibly entire devices in space.

And, with 3D printing of food already being tested out, how long before Star Trek-like food fabricators will emerge? Eventually, with space-reaped energy and building materials derived from other planets, space explorers will, like offspring who leave the nest, have little need for their Mother Earth.

But wherever they go, astronauts could use a snappier spacesuit, and M.I.T. researchers are a step closer to that goal.

The in-development MIT BioSuit will be skintight, providing yet another reason why astronauts, like their idealized visions in countless space movies and TV shows, cannot be fat. 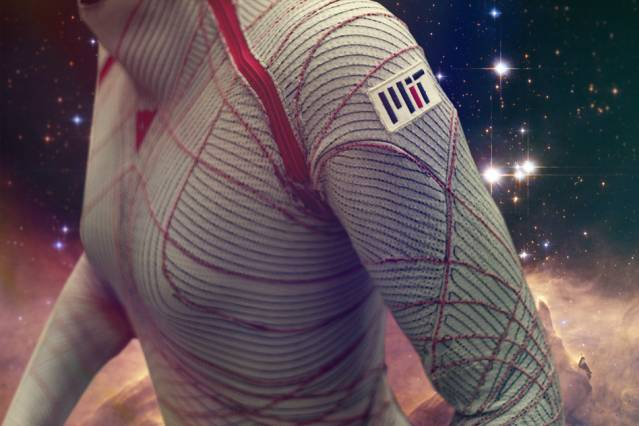 Above: The MIT BioSuit

This week, the research team announced that it had engineered “small, springlike coils” from a shape-memory alloy that “remembers” a shape that it returns to when heated.

“With conventional spacesuits, you’re essentially in a balloon of gas that’s providing you with the necessary one-third of an atmosphere [of pressure] to keep you alive in the vacuum of space,” aeronautics and astronautics professor Dava Newman said in a statement.

“We want to achieve that same pressurization, but through mechanical counterpressure [with the coils] — applying the pressure directly to the skin, thus avoiding the gas pressure altogether.”

It would be a shame to require that such well-attired astronauts strap themselves down into an upward-looking seat and then ride an explosion into space.

Instead, they can look forward to the most exclusive elevator in human history.

Japanese construction firm Obayashi has announced it intends to build, as part of an international alliance, the long-envisioned space elevator by 2050. Doing so, however, requires the further development of longer carbon nanotubes, which the company thinks will be possible within 35 years.

The space elevator, first imagined in 1895 by Russian scientist Konstantin Tsiolkovsky, will soar 96,000 kilometers up, feature magnetically-powered robotic cars, and each trip will cost only a tiny portion of what it takes to deliver that 3D printer up there.

However, there is one catch in the announced plan. An astronaut on the way to the Space Station would be travelling in that elevator car for seven days.