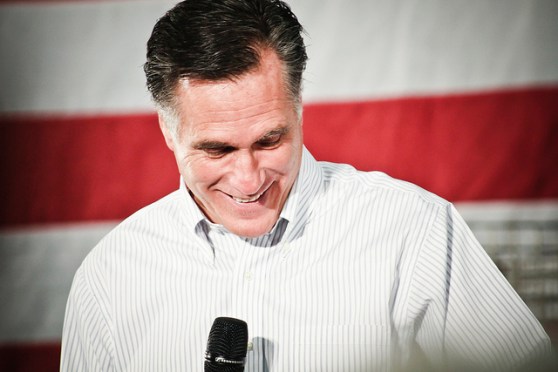 A leaked video of Republican presidential nominee Mitt Romney talking frankly about his election strategy has caused an uproar in social media.

Mother Jones published clips of the speech yesterday and followed up with the full, uncut video of Romney’s remarks today. Almost immediately, both Twitter and Facebook were flooded with comments about Romney’s speech.

The speech is a doozy. In it, Romney refers to the 47 percent of Americans who ostensibly pay no income taxes and says, “My job is not to worry about those people.” Romney also quipped about his father’s ethnicity, saying, “Had he been born of Mexican parents, I’d have a better shot of winning this,” and insisted, despite his family’s great wealth and political connections, “I have inherited nothing.” He referred to the need to softball his attack on Obama, because he didn’t want to upset independents who had voted for Obama in the last campaign, and he boasted about the expertise of his paid political consultants.

In short, the videos were a treasure trove for Democrats (and exasperated conservatives) looking for perfectly bite-sized, tweetable nuggets.

The impact was immediate and huge, and this shows the power of social media to magnify a gaffe. Sure, presidential candidates have made mistakes before, but now social media gives this an amplification effect thanks to the person-to-person sharing of links and tweets. As of this morning, Visible Measures, a video monetization and analysis company, had identified 120 separate clips of the secretly recorded videos, comprising a total of 2.4 million views. Here’s the breakdown of those views from Visible Measures: 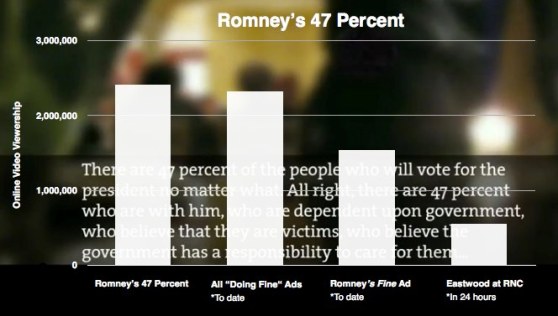 In terms of relative impact, the Romney videos blow away the comparables, as shown in Visible Measure’s chart above. Clint Eastwood’s bizarre speech to an empty chair at the Republican National Concention was also a viral social media hit, but it only garnered 550,000 views in its first 24 hours, or about a fifth of the Romney video’s impact. The video has also obliterated the impact of two Romney campaign videos, even accounting for all of their views to date.

On Twitter, #RomneyEncore (the tag used by Mother Jones to promote the release of the full videos) is one of the top 10 trending topics in the U.S. 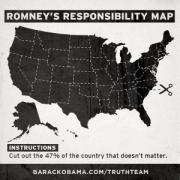 Of course, the Obama campaign quickly took to social media to deliver its own responses, helping amplify the impact by creating its own shareable content, such as the “Romney 47% map” to the right. Meanwhile, the Romney campaign’s response has been limited to traditional media, with comments made by the candidate at a recent campaign stop. Mitt Romney’s Twitter account has been silent on the issue.

To be fair, you can’t easily respond to a social media firestorm like this via social media. The Romney campaign’s best hope is to wait for the furor to die down and then wait for Obama to make a similarly embarrassing gaffe.

Will this impact Romney in the polls? Too soon to say. But it sure doesn’t look good on the Internet.