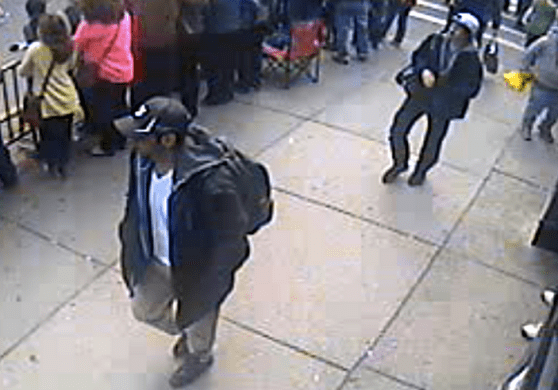 Shortly after two bombs exploded near the finish line of the Boston Marathon on Monday, the FBI called on the people of Twitter to submit photos, videos, and any other information about the scene.

Some said this would be the first crowdsourced crime investigation. And people on 4chan, a famously anarchic message board, took the crowdsourcing into their own hands, combing through photos and video and posting annotated pictures in an attempt to finger the suspects on their own.

Score one for traditional police work. The FBI released photos today showing its two main suspects in the Boston Marathon bombings. None of the photos match the 4chan’s picks.

In the aftermath of the bombings, the Internet lit up with attempts to raise funds for victims, connect people who met on the track, and find the individuals who committed such an ugly crime. But “suspects” were called out incorrectly. The New York Post printed an image of two men with backpacks at the race, calling them “BAG MEN” and claiming that law enforcement was on the hunt for them. It turned out not to be the case, causing Reddit to delete any posts that linked to the image and ban anyone who attempted to upload the story.

4Chan went on its own search for the individuals and created the “4Chan Think Tank,” an Imgur page with over 50 images of people it felt were suspicious.

With the FBI’s release today, however, we see that none of them really match up. Some images do get close with similar clothing styles, baseball caps, and more. But the FBI pictures have major differences from 4chan’s images. For example, a figure seen repeatedly in 4chan’s pictures has a white baseball cap, like the one in the FBI photo, but their clothes don’t match.

For now, crowdsourced detective work hasn’t gone much farther than pointing fingers. Perhaps the FBI involved crowdsourcing in some way, perhaps using tweeted pictures, YouTube videos, and more to put the pieces together, but at some point the general public just doesn’t have as many resources to hunt these guys now.

So, let’s ask ourselves. Do citizen detectives serve the public — or just promote fear?