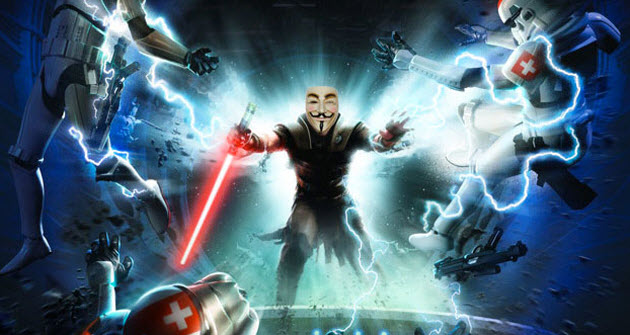 4chan, an image web site with an active hacker membership that can marshal considerable cyber firepower, has begun to attack web sites that have cut ties with whistle-blower site WikiLeaks.

Known as Anonymous, the 4chan hackers have initiated distributed denial of service (DDoS) attacks against PayPal, Swiss bank PostFinance, and other sites that have hindered WikiLeaks by cutting ties to it. If there were any doubt that we’re in some kind of information war, this is probably the clincher. On the one side are authorities that want to knock the controversial WikiLeaks out of action. On the other are its defenders, who would help it evade the authorities and enable it to continue posting classified government secrets.

A 4chan spokesman named “Coldblood” has said that any web site that is “bowing down to government pressure” is a potential target of DDoS attacks, which flood a site with requests until it is shut down. The attacks are being performed under the name Operation Payback, which has also initiated attacks against anti-piracy groups such as the Recording Industry Association of America. If the campaign is valid, then Amazon, EveryDNS.net, MasterCard, Visa and others could also be targets — since all have cut off WikiLeaks.

Ars Technica reports that the attacks against PayPal took its blog offline temporarily but the main PayPal site wasn’t shut down. But the Swiss bank’s web site was unavailable for more than 16 hours. The bank was targeted because it shut one of WikiLeaks founder Julian Assange’s bank accounts because he lied about his residency on an application form. But even as WikiLeaks has lost access to revenue sources such as PayPal, the startup Flattr, created by Peter Sunde, co-founder of torrent site Pirate Bay, has been raising money for WikiLeaks.

Earlier today, Assange was arrested by the British police on sex charges related to an investigation in Sweden. He is fighting extradition, but also posted a missive dubbed, “Don’t shoot the messenger for revealing uncomfortable truths.” The idea of WikiLeaks, he wrote, was to use internet technologies in new ways to report the truth. He noted that Sarah Palin says he should be “hunted down like Osama bin Laden.” Assange also said that in its four-year history, WikiLeaks’ publications haven’t led to any deaths.

There are thus a lot of contradictions in what 4chan is doing, where its forces are preventing sites from speaking out and are punishing those sites because they want to hinder WikiLeaks from speaking out. The site of Assange’s Swedish prosecutors has also been taken offline. 4chan itself has also come under attack, and WikiLeaks has been under continuous cyber attack. Hundreds of mirror sites have sprouted to make sure that WikiLeaks does not go offline. Make no mistake. This is an infowar. In a recent tweet, cyber guru John Perry Barlow said just that, “The first serious infowar is now engaged. The field of battle is WikiLeaks. You are the troops.”