(Update: The amount is $2.5 million, according to regulatory filings.)

4INFO, a Silicon Valley company that lets you search for information using text messaging, has become the official service partner for media giant NBC Universal. It has also received an undisclosed financial investment from the media giant’s arm, Peacock Equity.

While questions remain about how popular text messaging, also known as Short Message Service or SMS, will remain as more mobile broadband services are introduced, 4INFO is on a roll.

This deal means all of NBC’s SMS alerts for information published from its websites, including iVillage, NBC Sports, its mobile sites, and of all of its movie and interactive TV sites will go through 4INFO. SMS ads — text ads that appear with SMS messages — will be sold by both companies. Advertisers will be able to place ads across NBC’s TV, web and SMS ad inventory. 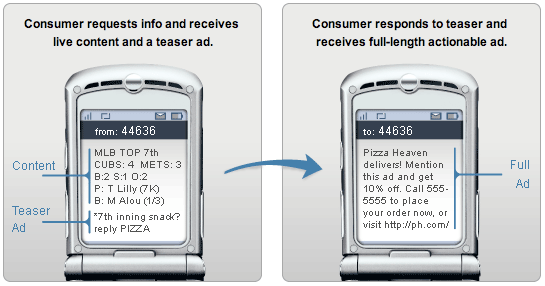 San Mateo-based 4INFO already has similar deals with Gannett and six other media properties, but this deal is wider-ranging, and NBC already has SMS inventory that can feature SMS ads.

More than 500 other companies and developers also use 4INFO.

4INFO is also taking a strategic investment from NBC’s Peacock Equity as part of the deal. The amount wasn’t specified, but Peacock said it was in the range of its typical investment of between $3 million to $25 million. The investment was made at on same terms as 4INFO’s previous round of capital, which included Gannett. Previous backers include DFJ and US Venture Partners. Sand Hill Capital also invested in the latest round.

We asked chief executive Zaw Thet about the long-term prospects for SMS. With more advanced mobile data services exploding around the world, its possibly people may upgrade from SMS to use richer or more complex communications systems like mobile IM, or email — to date, hampered by the state of cellular networks. He says that even in European and Asian countries that have more advanced mobile services, the number of SMS messages sent continues to rise. The reason: text messages are still the fastest, easiest way to contact a mobile user and SMS software is installed on every handset.

Down the road, the company hopes to use its connection with users to gather more demographic and behavioral data about its users so it can offer them more targeted advertising.