(Tonight’s roundup is foreshortened so we can go meet with attendees at i9 NewTeeVee conference.) 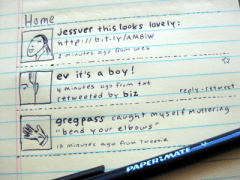 In short, they’ve built an automated retweeter that avoids the truncated text, confusing avatar/text mismatches, and river of redundant retweets in the ad-hoc manual retweeting ecosystem that users had concocted.

They’ve used internal metadata and an API, plus I’m sure they reviewed every whiny complaint a lot of users might have. Twitter has temporarily disabled the feature due to some unspecified bugs, but when it comes back, let us know in the comments if it works for you.

Wall Street gossip network lights up in response to H-P’s $2.7B acquisition of 3Com — Volume in 3Com’s November call options were 17 times the four-week average, according to Bloomberg News. OptionMonster writer Jon Najarian pointed out that November call options are expected to provide a 3.5x return in one day.

Facebook iPhone programmer quits, blames Apple — “My decision to stop iPhone development has had everything to do with Apple’s policies,” developer Joe Hewitt wrote of his decision to abandon his role and move onto another Facebook project. “I am philosophically opposed to the existence of their review process” for his work, which requires him to submit his work to Apple to be approved for download in the iPhone App Store. For all the developers climbing over each other to get  rich at the App store, many simply find Apple’s mysterious and final review process insulting.