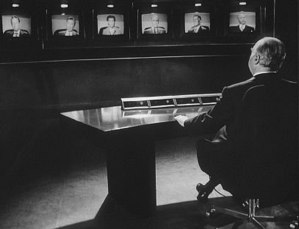 What does Tandberg do, the 100-word version — Cisco agreed to buy the Norwegian company for $3 billion in cash. Tandberg makes video conferencing systems perfect for holding global business meetings like the one in Rollerball 35 years ago. Cisco is, as the Wall Street Journal reports, going up against H-P on videoconferencing now that it’s become affordable and workable for regular employees, not just Bond villains. There’s one unfortunate result of the Cisco/H-P war: Incompatible systems.

Comcast / NBC Universal merger in the works over at GE — Wall Street’s response to the likely deal was a jump in Time Warner shares, as investors expressed relief that Time won’t be buying into oh-so-complicated NBC Universal, the company with a hit sitcom about itself.

Obama forbids federal employees from text messaging while driving — The New York Times’ Matt Richtel files a long feature on the habit. He talks to a professor of psychology who says of the texting-while-driving practice, “There is an illusion of productivity … It’s actually counterproductive.” Richtel’s 3,500-word story has a touching ending.

British High Court sends its first injunction via Twitter — A twitterer who impersonates right-wing blogger Donal Blaney perhaps didn’t think it through that Blaney owns a law firm — or maybe the idea was to goad Blaney into action? This Reuters report makes it sound like the court used a direct message, one only visible to the account’s owner. A spokesman for Griffin Law, which Blanel owns, told the BBC, “Whoever they are, they will be told to stop posting, to remove previous posts and to identify themselves to the High Court via a web link form.” 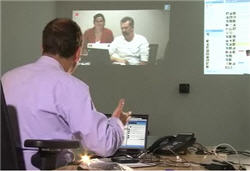 Scoble calls Google Wave “overhyped” — I hope Google finds someone who can explain its Wave product in English to those of us who don’t get one of the invites to try it firsthand. (Update: Camille got one. She gets to explain it!)

“When I look at my Google Wave page I see dozens of people all typing to me in real time. I don’t know where to look and keeping up with this real time noise is less like email, which is like tennis (hit one ball at a time) and more like dodging a machine gun of tennis balls. Much more mentally challenging.”

Scoble recommends that for now, we leave Wave to software developers, and give them some time to figure out what to do with Wave’s application program interface.