Google’s plot to centralize all Internet discussions is exposed by a guy who used to write for TV Guide — I’m serious. Jeff Jarvis spotted the difference between Google’s new Sidewiki and its search engine, because that’s what he does for a living:

Google is trying to take interactivity away from the source and centralize it. This isn’t like Disqus, which enables me to add comment functionality on my blog. It takes comments away from my blog and puts them on Google. That sets up Google in channel conflict vs me.

So this goes contrary to Google’s other services – search, advertising, embeddable content and functionality – that help advantage the edge. This is Google trying to be the center.

And this is me trying to get in the last word: Google Sidewiki has the maddening-to-reporters nature of a Google product launch. We get a blog post with an Afterschool Special title –“Help and learn from others” — and a link to some ponytailed-grad-student research writeups. Why are they releasing it now? The thing doesn’t even run on Google’s Chrome OS operating system. Are they serious, or is this a trial balloon? I think the latter. If the world loves Sidewiki, they’ll build it out. If not, one of Eric Schmidt’s evil henchmen will press the same button that made Knol vanish from our minds. 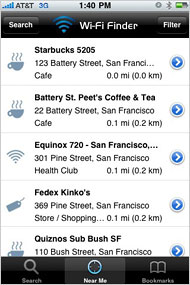 Your smartphone now works at Starbucks — The New York Times reports that while I was waving my iPhone around trying to get a 3G connection, the overburdened wireless carrier has already cut a deal with Starbucks so that AT&T smartphones — BlackBerry, iPhone, Windows Mobile, but not HTC (am I right?) — can automatically route calls through Starbucks’ network.

Perot employee accused of $8.6M through insider trading on Dell deal — Reza Saleh works for Parkcentral Capital Management in Perot-ville, aka Plano, Texas. The Securities and Exchange Commission claims Saleh traded options just before Dell’s announcement on Monday that it was buying Perot Systems. The guy is 53 years old, so youthful indiscretion is out as an excuse. What I’m dying to know: What threshold in dollars could he have gotten away with if he hadn’t gone for nearly ten million bucks?

South Koreans will get iPhones — They’ll make fun of us, you know, because they won’t have AT&T.

This sure beats that part at TechCrunch50 where Mike Arrington huffed off stage — VentureBeat blogger in chief Matt Marshall surprised everyone, us included, with a dance number in the middle of this afternoon’s DEMOfall conference, sponsored by VentureBeat. Video is being uploaded. I’m glad I stayed at the office this week, because I’d hate to have to follow this act. [Disclosure: DEMO competes with TechCrunch50.]