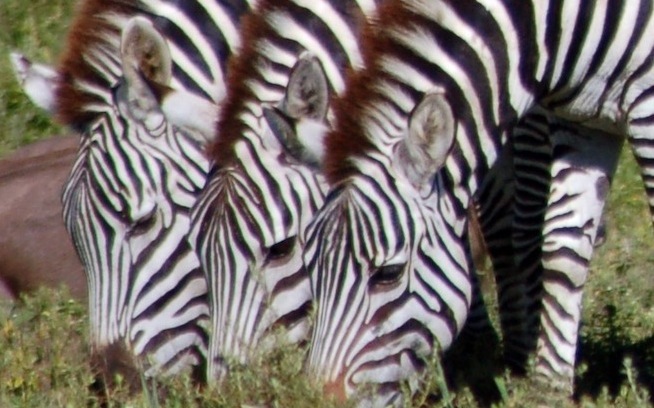 Above: Just imagine if iOS, Android, and Windows Phone were as consistent as these three zebras. Boring!

Image Credit: Charlie Kindel / Flickr
This story is brought to you by Sourcebits, a Global leader in Strategy, User Experience & Engineering for Mobile & Cloud. Follow Sourcebits on Twitter for recent news and updates.

Conventional wisdom says that massive diversification in the smartphone industry is a disaster for developers. How can even large development houses support three massively different mobile platforms: iPhone, Android, BlackBerry, and Windows Phone? With limited development budgets and even more limited marketing dollars, it seems impossible. More than that, even undesirable.

But convention wisdom is often dead wrong. The mobile platform wars may just be your best friend.

Here are five reasons why mobile fragmentation is good for you.

So iOS has what, 50 million apps today? How are you going to stand out in that giant ocean? Even getting noticed is going to require incredibly good luck, huge marketing budgets, or a secret ally in the app store. Why even try?

Look at Amazon’s Android-based, highly customized Kindle Fire. Small platform, some might say — perhaps even a niche within a niche. But that’s actually a positive. “We’re seeing impressive uptake on Kindle Fire and Amazon’s marketplace,” said Nat Trienens, co-founder and Director of Mobile Services for Fuzz Productions in New York. “There aren’t as many apps in that market, so there’s a bigger opportunity to get better market position.”

Making big ponds smaller means your app has more chance of getting noticed, installed, and used. If you can’t beat Angry Birds on iOS, maybe you can beat Gerbil Physics on Windows Phone.

You know this. This is not a shock. But have you really thought about it?

There are currently almost 6 billion people on the globe who have a mobile phone, according to the International Telecommunications Union. 6. Billion. People. That’s a lot. And many of them have or will soon have smartphones: IDC tells us that 491 million smartphones were shipped in 2011.

That means a lot of people want apps. We all know Android is huge and iOS is gargantuan. But with Nokia starting to ship Windows Phone units, Windows Phone is going to be a major platform. And BlackBerry still has some 80 or 90 million users worldwide.

Those numbers mean that apps can have success on a variety of platforms. You don’t have to focus only on iOS and Android.

Choosing your target market is as important as building your game, utility, or widget. And diversity in the mobile marketplace means you have options.

Take today’s billion dollar poster child for app success: Instagram. By focusing first — and only — on iPhone users, Instagram reached a huge audience: 30 million people. Instagram CEO Kevin Systrom bet heavily on Apple users’ reputation for caring a lot about design and aesthetics. Limiting your app to a specific platform (at least initially) can help you focus your target audience on those users who are the most likely to resonate with your app … which gives you the greatest possible chance to break away from the pack and earn some positive buzz.

That doesn’t mean you ignore the other platforms. After all, Instagram did finally come to Android. And as Trienens noted, “you want to be on the platform that has the most usage potential.” But perhaps not right away.

You will also want to choose your target market based on relative platform strengths and weaknesses. Perhaps the best example is built-in turn-by-turn navigation on Android. You’d better be certain that your navigation app has something significant and distinct to offer if you decide to release on Android. After all, free is a strong argument for “good enough.” But perhaps iOS or BlackBerry or Windows Phone might be a more receptive market.

Or perhaps your app is focused on government markets. “The government is still using BlackBerry more heavily than other organizations,” said Chatow. And, in cases where large amounts of data entry are required, the physical keyboard still has its devotees. “I was sitting on the plane next to someone from a major retailer the other day. She was typing on her BlackBerry literally for the entire flight. When I asked whether her organization was considering other platforms, she said she couldn’t type on anything else.”

And BlackBerry still has a reputation of being a very secure platform, which is many politicians and leaders still use it. Perhaps it is the one thing that all of Barack Obama, Hugo Chavez, Sarah Palin, and Queen Elizabeth II all agree on.

Platform choices also provide space for easy monetization experiments. How will you make the most money with your app?

Flurry, the mobile analytics and monetization company, says that when in comes to in-app purchases, Google Play accounts for only $.23 for every $1 that the iTunes app store generates, per user. But the models are different. Paid apps are doing better on iOS. Advertising models are successful on both platforms.

One important key to successful Android revenue optimization: compatibility testing. Seriously. Because Android is a more complex platform than iOS, with more device and OS diversity, more testing is required. As surprising as it may seem, an app that actually functions is going to convert better than one which does not.

What can you do on one platform that is totally impossible on another? That’s a potential niche to attack.

One example is an email app on iOS. Or a music library app, or salacious content. If you choose any of these ideas, you are going to run into Apple’s app store police, who will make sometimes arbitrary-seeming decisions, and the app you invested time and money into may never see the light of day. On Android, there are fewer restrictions. Also, there are other options: if your app won’t fly in Google Play (formerly known as the Android Market), there are 80 or more other app marketplaces to choose from.

Another platform difference is one of Google Play’s advantages: try before you buy. Sure, the original 24-hour limit was radically reduced to 15 minutes in December 2010, but try returning an app on iOS — it’s impossible in any time frame. You can use this in your marketing and in your app story, and it’s potentially better than developing a free “lite” app and a paid app, which splits your downloads, splits your reviews, and could prevent your apps from climbing the top download charts.

Even a very young platform like Windows Phone has unique advantages. Small can be beautiful, as the makers of I’m a WP7 app have found. There are fewer Windows Phone users, which can help create an immediate affinity when they meet serendipitously. It’s like owning an iPhone in 2007: You have an instant connection with others in the “club.”

Mobile fragmentation creates challenges. Out of challenges come solutions. And in solutions are opportunities.