The weekend before last, I attended one of the most unique and special “tech” events I’ve ever been to: Robert Scoble’s 50th birthday party. The event was attended by so many top players and entrepreneurs in the tech industry — from all across the globe — that you may have mistakenly thought you had been dropped into the TED or DLD conference.

Folks in attendance included Michael Arrington, Matt Mullenweg, Dave McClure, Jeremiah Owyang, Brian Solis, Scott Beale, and another 200+ influencers from Silicon Valley. They all showed up in Napa Valley to pay their respects to one of the most influential players in the industry.

The amount of love the tech community has for Robert Scoble is overwhelming. If the tech community were a country, Scoble would be its ambassador. Not only because we would want him to be, but because he truly knows more about the state of the global tech community than anyone else on planet Earth. I’ve known Scoble for seven years, and I’ve always been in awe of how much knowledge this man possesses about so many startups.

The last few days have led me to think about Scoble’s unique role in the tech industry. Part thought leader, part evangelist, part connecter, there’s no one quite like him.

Why is it that he is loved by so many? Here are my thoughts — and some lessons I believe other influencers can take from Scoble’s example.

So many influencers in Silicon Valley shut themselves off from entrepreneurs, most probably because they’ve been pitched one too many times and feel jaded — or perhaps because they feel they’ve reached a higher status. In my eyes, there are very few people in our industry who could be considered higher stature than Scoble, and yet for the seven years I have known him, not once have I seen him turn away anyone. He listens to every single person that pitches him and gives his honest and truthful opinion.

This sort of feedback is invaluable to entrepreneurs while developing their products and also puts Scoble in a unique position to influence the shape and form of so many technology products out there. Did you know, for example, that he helped out in the early stages of many well-known startups such as Instagram, Flipboard, Twitter, Siri, and Box?

This openness to entrepreneurs is also the reason that Scoble always hears of the best and most innovative apps and services before anyone else – he is always there first to listen.

By making himself accessible, not only is he gaining new contacts in the tech community every day, he is also spreading his influence over the technology they’re producing.

People feel open enough to share their dreams, wishes, and stories with Scoble, because he shares everything about his life with them as well. Scoble has always been very open, whether he’s discussing his latest thoughts on the state of Facebook or sharing much more personal stuff about his life. Scoble holds nothing back. 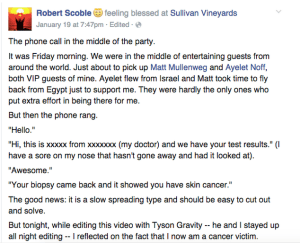 For instance, much to the shock of all of his followers and especially those of us who attended his birthday, a day after his birthday event, Scoble posted a touching, yet somewhat alarming Facebook status that he had been diagnosed with skin cancer.

This post was a clear depiction of the way Scoble has always been: totally transparent. He is open with those around him and expects nothing less from the entrepreneurs surrounding him. He feels a sense of commitment to his followers, to let them know everything that’s going on with him – whether it’s his personal thoughts on life or views on products.

This behavior causes entrepreneurs who have never met Scoble before and meet him for the first time, to feel like they’re meeting an old friend, so they share everything with him while also feeling a sense of camaraderie.

Lesson 3: Give honest feedback, but do it in a nice way

Scoble has the capability to make or break startups, and he knows it. However, unlike other influencers who may let this power go to their heads, Scoble always makes sure to either say positive things, or alternatively, if he has negative feedback, to make sure and say it in a positive and friendly manner.

His feedback is always genuine and meant to ultimately help create a better product. This is yet another reason why people love him so much. They know that he will always be straight to the point with them, and this feedback comes from an honest place. You can count on Scoble to give you a reality check so that you realize if you’re on the right path or not.

Lesson 4: Don’t be afraid to say you were wrong

Scoble has always been very open in giving his opinion. However, unlike other influencers, he has never been ashamed of saying “I was wrong!”

One example is his recent Facebook status congratulating Box on its IPO and stating that when he initially met Aaron Levie, he never thought Aaron would make it in this industry. 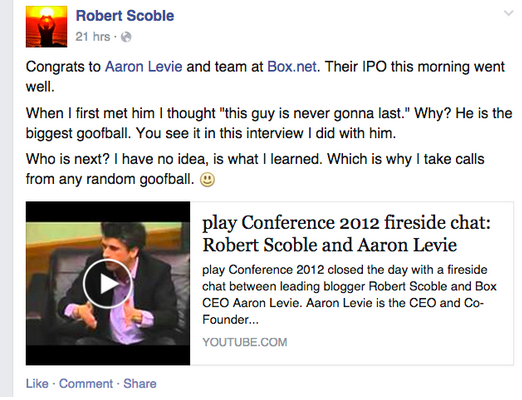 Another more famous example, is Scoble’s initial excitement over Google Glass, saying he would never take it off, not even in the shower.

But now that Google Glass isn’t doing so well, Scoble wasn’t afraid to declare that it needs a rethink. 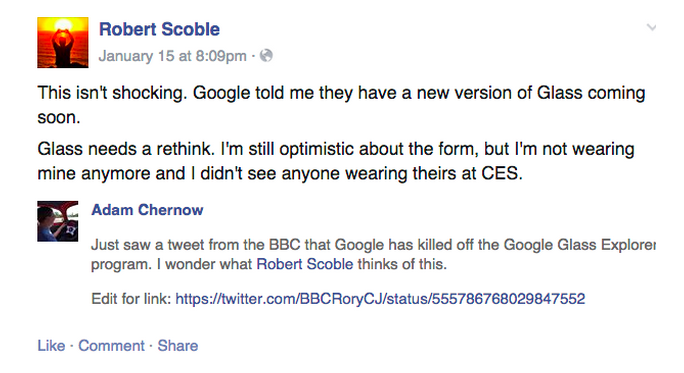 Due to his influential status, Scoble gets many perks from entrepreneurs around the world, just like most influencers do: Free gadgets, access to apps, invitations to visit conferences and stay in nice hotel rooms, and so on. These are usually forgotten by most influential figures in the Valley. However, Scoble never forgets these gestures and always acknowledges them — either through a Facebook post, tweet, or a reciprocal gesture. He doesn’t just take these benefits for granted like other folks of his caliber might.

Entrepreneurs, of course, appreciate this and remember him for it. Many of the activities throughout Scoble’s birthday for example, were contributed by individuals, due to their admiration for Scoble and appreciation of him.

However, in the end, I think the most important thing that Silicon Valley should learn from Scoble, is just to be nicer to and more patient with one another. I know that sounds corny, but it’s true. In this industry, all of us are constantly looking for the next big thing, searching for higher ground. Let’s just all take a moment to appreciate the entrepreneurs around us, to understand what they might be going through, to put ourselves in their shoes, and to think about the value they bring into our lives.

As Scoble said about Aaron Levie and success: “Who is next? I have no idea, is what I learned. Which is why I take calls from any random goofball.”

None of us know what the future will bring or who will be the next Zuckerberg, but we can all try to be a little nicer and kinder with one another, in the hopes of creating better products together — and ultimately a better, more supportive tech community.