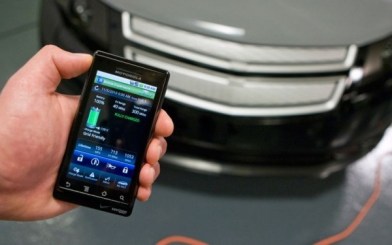 Smartphones aren’t the only devices where apps will dominate. As our cars get smarter, apps will inevitably become a bigger part of our driving experience as well.

Smartphone apps connected to electric vehicles will let us track charging levels and control certain vehicle functions. And when it comes to the in-car experience, our cars will be able to communicate with our mobile devices effectively thanks to built-in software and apps.

VentureBeat will be discussing electric cars and consumer energy efficiency products this week at GreenBeat 2010, Nov. 3-4 at Stanford University.

What follows are just a few ways that apps will soon be inseparable from our cars:

Nissan’s Leaf iPhone App: Nissan is gearing up to unleash the Leaf — the first mass-produced, all-electric car — in a handful of states in the US this December, and the company is also releasing an iPhone application alongside it. The application will let Leaf owners remotely view the battery life left on their car, as well as the time required and approximate cost to recharge it.

Owners will also be able to remotely detect the internal temperature of their Leaf, as well as turn on heat or air-conditioning. The functionality is no different from a typical remote starter, but the added temperature reading information could help you decide if it’s worth spending the extra juice to pre-heat, or pre-cool, your Leaf.

We’ll likely see an Android version of the Leaf app eventually. And since the car is running Microsoft’s Windows Embedded Automotive 7 — the company’s terribly named integrated operating system for cars — I wouldn’t be surprised to see the Leaf’s in-car app ecosystem open up.

General Motors’ OnStar Mobile App: GM was likely inspired by Nissan’s mobile app idea for the upcoming Chevrolet Volt. GM’s app, which will be available for iPhone, Android and BlackBerry, also lets you track battery levels and remotely control climate. In addition, it can send you alerts if you forget to recharge your Volt and will you choose to charge during cheaper off-peak hours. The app will also provide OnStar functionality like remotely opening door locks.

GM teamed up with Google to bring its Android mobile operating system to the Volt earlier this year, so we can expect even further integration between the Volt and Android phones in the future.

Ford’s Sync AppLink: Over the summer, Ford announced that Android and BlackBerry users will be able to use voice commands on mobile apps with Ford’s AppLink upgrade for Sync — the car manufacturer’s in-car software system developed together with Microsoft.

So not only will Sync users be able to use voice commands to do things like play music on their device, or make calls, but they’ll also be able to take advantage of third-party apps like Pandora as well. The company also announced a developer network that will make it easy to implement Sync support in mobile apps.

Ford’s Sync software has never really gotten the recognition it deserves for its surprisingly good voice recognition technology. But the release of the much-anticipated Ford Fiesta — a traditional car with great gas mileage and a low price — may turn on more drivers to the technology. Sync is also based on Windows Embedded Automotive, so there’s the potential for even more app integration down the line.

Coloumb’s ChargePoint app: This nifty iPhone application (available free on the App Store) lets you easily find the nearest electric vehicle charging station and tells you if it’s available or in use. Once at a station, the app also lets you start, stop, and monitor a charging session.

Nokia’s mysterious app plans: Earlier this year, Nokia, along with a consortium of five major car companies, announced a technology specification for integrating mobile apps into cars. The consortium consisted of Audi, BMW, Daimler, Porsche, and Volkswagen, so the platform will likely take off first in Europe. There’s no further information on Nokia’s plans yet, but it looks like the plan is to push its specification as a standard for all cars.

By this time next year, we’ll surely see even more innovation when it comes to car apps. And hopefully by then, electric cars will seem like more of a reality, instead of a pie in the sky ideal. It’ll be interesting to see what some of the other major car manufacturers, specifically Toyota and Honda, have up their sleeves as well.

Are you a green executive or entrepreneur? If so, sign up now for GreenBeat 2010 — the year’s seminal conference on the smart grid — November 3-4 at Stanford University. World leaders in smart grid initiatives will debate how the new “Super Grid” is creating huge opportunities in cars, energy storage, and renewables. GreenBeat 2010 is hosted by VentureBeat and SSE Labs of Stanford University. Go here for full conference details.