Just five years after it first launched Ping in 2010, Apple is closer to providing a social network worth interacting with, but it’s still not hitting the mark.

This week the company launched Apple Music, its Spotify competitor. Apple Music features a host of different services including a series of genre-based music streams, recommendations, a live broadcast channel, and a social media feed called Connect for following musicians.

Connect is Apple’s first attempt at a music-based social network since shuttering Ping in 2012. 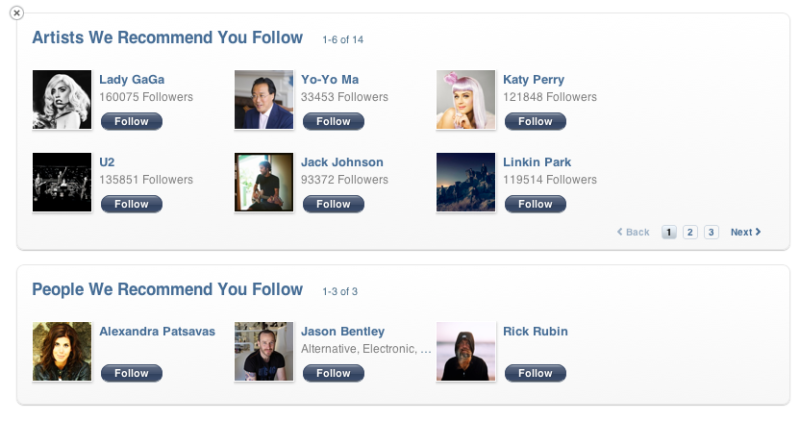 Ping was a music recommendation and sharing tool that came loaded on iTunes 10. The service made music recommendations based on users’ interests, connected them with like-minded music fans, and allowed them to follow artists. Unfortunately, it wasn’t very well-received. For instance, Ping only allowed users to select three music genres from which it would make musical recommendations. Many people found this limiting and the resulting recommendations lackluster. After two years, Apple shuttered Ping permanently.

Its latest effort, Apple Music Connect, is in many ways similar to Ping, though it’s a much more refined experience. Where Ping mimicked Facebook, Connect is more like Tumblr. The new feature provides musicians and curators with a page where they can post videos, photos, and music to their following, and fans can comment beneath. While the interface is attractive in the ways you’d expect from Apple, the platform so far has one major problem: No one is on it. 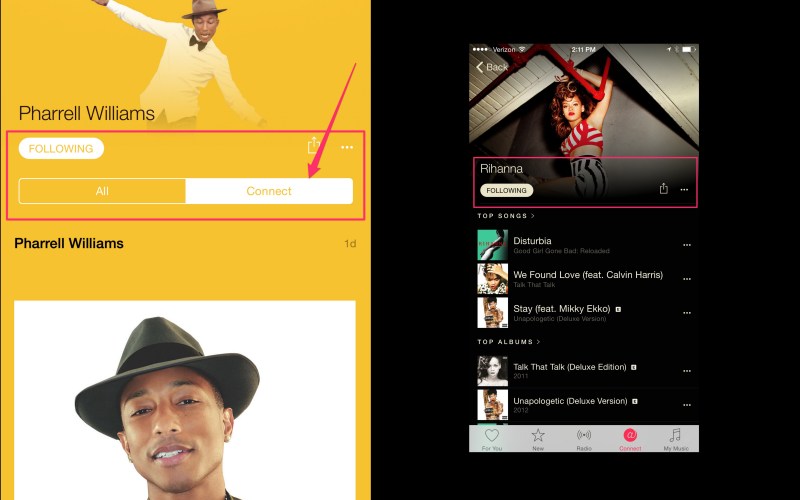 Of the many artists I searched for on Apple Music, I found that only a handful of them have Connect accounts, including Azealia Banks, FKA Twigs, Pharrell Williams, Britney Spears, Jenny Lewis, Snoop Dogg, Common, and Miley Cyrus. Notably, none of the musicians that support Jay Z’s music streaming service Tidal appear to have Connect accounts (those include Beyonce, Taylor Swift, Madonna, Rihanna, the White Stripes, Nicki Minaj, Daft Punk, Alicia Keys, Calvin Harris, Usher, Kanye West, and Arcade Fire).

Connect does recommend artists for users to follow based on their musical preferences, but it only serves up nine suggestions at a time. It doesn’t give you a fresh batch of suggestions every time you look, either — rather, you get one list of recommended artists to follow and if you don’t want to follow them, you’re stuck with that list. If you do follow someone the service recommends, it will swap out that person with a new artist recommendation. However, that makes for an exceedingly laborious discovery process. There’s also no way to get a full list of all of the artists who have Connect accounts.

You can follow artists who don’t have Connect accounts, but it doesn’t do much in the way of linking you up with them. Un-Connected Artist pages are humdrum listings of albums, songs, and music videos — stuff you can already get through Spotify or a cursory Google search. For superfans this may be the cat’s pajamas, but for the rest of us it leaves something to be desired.

Users can also follow curators, though for now Apple appears to be the only curator. It has a series of music collections, each titled after a genre, like Apple Pop, Apple HipHop, and Apple Alternative. Curators tend to post music playlists, which helps break up the feed of photos and music videos. Right now with Apple as the sole curator, selections are a bit boring, but if Apple can attract and support a broad spectrum of music curators, then it would have a compelling social platform on its hands — one that would actually enable new music discovery. As someone who doesn’t have time to keep up on the latest music trends, I would love to follow someone who makes it their business to do so. Apple, with its reputation for taste-making, has plenty of potential to build out a curator social platform.

Among the artists using Connect, the content is what you’d expect. Pharrell Williams posted a portrait of himself that garnered 1,240 comments. Meanwhile, rap artist Common posted a music video from last year to his feed. There’s also an FKA Twigs post (heavily promoted by Apple) showing off new choreography for her song “In Time.” 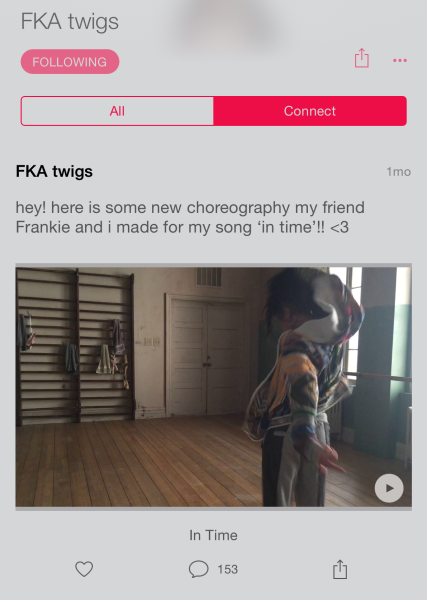 While there seem to be a few truly exclusive posts (like Feist’s shout-out to Mocky on his new album Key Change), overall artist content seems limited. I can’t imagine that Apple Music Connect will really become a forum for unfiltered artist reverie and exclusive content. This is especially true given Apple’s reputation for tightly controlling everything that appears on its devices and products. A feed of old music videos and some flashy photos doesn’t feel especially revolutionary, although the occasional piece of exclusive content could keep fans coming back for more.

For now Connect is a sleek yet boring tool for superfans of a few big stars. Still, there’s lots of potential if Apple can add more musicians to its roster. Even failing that, Apple could still win the day if it can make itself a desirable platform for music curators and DJs to show off their best new playlists.

Spotify already does this to a large extent, connecting listeners to their friends so they can swap and listen to each other’s playlists. Whereas Spotify leverages Facebook to connect listeners to friends, Apple could focus on connecting users with really good curators, people who consistently introduce them to cool new tunes.

To get there, it will have to restrain itself from wanting to control every piece of content that gets posted, while also being selective about who its curators are. The fact that Apple is allowing comments on Connect seems to say that the company could be loosening its grip — at least as far as Apple Music is concerned. If that’s the case, Apple Music’s Connect might finally do social right.