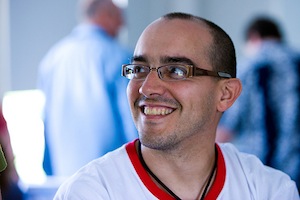 500 Startups was founded by “super angel” Dave McClure, who previously ran the fBFund incubator for Facebook startups. The company makes normal seed investments, but also combines those investments with hosting and mentorship through its 500 Startups Accelerator.

We’ve seen a bunch of incubators emerge in the last few years, but McClure’s incubator stands out with its focus on design, distribution, and the lean startup methodology.

Of the 12 incubated startups that we saw today, three of them were big standouts:

Visual.ly — Visual.ly gives publishers and advertisers a way to quickly get a hold of data for infographics — and contract the work out to designers. Most major publications like the Huffington Post and Gawker regularly publish infographics as a way to get a reader’s attention. Publishers pay a recurring subscription fee to Visual.ly to get a hold of data and get access to analysts and designers to create an infographic custom suited for their needs. The team is from Mint.com’s award-winning blog,which gets 1 million page-views every day.

YongoPal — YongoPal is basically a photo-sharing application that is designed to inspire communication between two individuals in completely different companies. The service was originally launched to connect Korean students with English-speaking students to help the Korean students learn English. The mobile app gives individuals a prompt — like “What are you haivng for dinner?” — and asks them to take a photo to start a conversation. The original application picked up 23,500 downloads from university students in 3 months without promotion.

Baydin — Offers tools to manage your inbox. Some of those tools make answering emails a little easier, for example by scheduling a time to re-receive an email that you can’t deal with at the moment. More ambitously, it has also created a gaming framework around email, to keep you motivated to plow through your inbox and not spend too much time on any individual message.

Outside of our favorites, there were a number of companies pitching products that sounded promising and that we might actually use. Here are short descriptions of the other demonstrators:

Spoondate — Helps people get together for meals. Users announce the kind of food they’re craving, then they can connect for one-on-one or group gatherings. The site will also offer ways for restaurants to reach out to potential customers. Apparently the company started out as a dating site, but it now aims to be a broader social service, especially for professional women.

Punchd — Punchd lets businesses transplant their “buy 10 get one free” cards onto the smartphones of customers. The businesses that sign up with Punchd also get access to analytics that describe what kind of customers they have. Any business can sign up for the service through the web, but they still have to be manually approved for now. 60 companies have signed up for the service and are on a wait list now. The company launched its service at three college campuses and saw more than 7,000 “punches” on those virtual buy-ten-get-one-free cards.

Rewardli — Rewardli brings small businesses together to make large group purchases so they can take advantage of group buying discounts. That can include services like Expedia — where companies can get discounts for buying plane tickets in bulk. Rewardli tacks onto a web browser to keep track of how much money a company saved by purchasing with a group discount. The app also indicates how much more money a company could have saved by adding additional companies to the buying pool — and offers a suggestion to invite moe people. The company has raised $100,000 from 500 Startups and Real Ventures.

Wednesdays — Wednesdays is an online application that handles all the nitty-gritty details to schedule business lunches. The app connects users with LinkedIn and Facebook connections to generate “groups” that companies can use to schedule tailored lunch meetings. That means scheduling a lunch meeting with specific roles — like sales associates or programmers — with other individuals. The back-end process is more similar to filling seats on an airplane because it fills up lunch meetings based on certain conditions rather than just haphazardly scheduling lunch meetings. The service automatically slaps those lunch meetings onto calendar programs.

Ninua — Ninua is a news-sharing application for Facebook that recommends stories based on three conditions: whether it’s mainstream, whether it’s niche and whether a user’s friends are reading it. That gives users the chance to automatically curate what kind of stories that appear in front of them based on their own interests and their friends’ interests. Ninua signs up blogs to help them pick up some additional publicity and find new readers based on the content they produce as well. The service already has 1.7 million active users, and it’s now launching a mobile application.

CrowdRally — CrowdRally connects to YouTube and other social media sites to show what a user’s friends are watching. It creates a queue of videos that friends have watched and lets users give suggestions about videos to watch. “Influencers” that can generate a lot of traffic for a video can sign up and share videos on the service as well — such as a movie trailer or a music video. They then get paid based on the number of views they bring to the video.

SpeakerGram — Has created a new way to manage speaking engagements. A hot company like Foursquare is bombarded with speaking requests for conferences and elsewhere (VentureBeat has done its share of bombarding), and most of that comes in the form of email. With SpeakerGram, companies can just add a “request to speak” button to their site, asking event organizers to provide relevant information. Then the potential speakers can just log in to the system and go through the requests in an organized way.

Motion Math — Creates educational games for tablets. The idea is to use tablets’ touch interface and accelerometer to make difficult concepts (like fractions, which were the subject of Motion Math’s first game) fun and visceral.

The 500 Startups Demo Day also included portfolio companies that weren’t part of the accelerator, but we’ve covered a number of those startups before. So instead of describing all of them, we’ll just write individual posts about companies that strike our fancy.