In the past year, IBM’s Watson supercomputer has gone from rarefied ivory-towered (yet potentially world-changing) object to something that developers could actually take advantage of.

Yesterday, IBM announced that over 100 partners and companies are already using Watson worldwide. And it’s laying the groundwork for even more developers to take advantage of its unique cognitive computing technology.

IBM highlighted several Watson-powered companies at its brand-new Manhattan Watson headquarters yesterday, which ranged from a smattering of healthcare solutions to something as simple as helping mobile carriers figure out the best plans for a potential customer.

Unlike the computing paradigm we’ve been relying on for decades, Watson is focused on cognitive computing, allowing it to automatically unearth insights from huge amounts of data and learn over time. It can also understand plain English — you don’t need specialized search strings.

Below, check out the companies and projects using Watson that I found the most intriguing.

Travelocity founder Terry Jones didn’t need to start another company — he’s already a chairman and co-founder at Kayak, a special venture partner at General Catalyst, and a prolific speaker — but when he saw the potential behind Watson, he couldn’t help himself.

With WayBlazer, Jones is going a step beyond booking travel — it uses Watson’s smarts to give you insights and recommendations on where you’re headed. If you’re flying from somewhere warm to a chilly locale, for example, it could recommend that you pack a jacket.

In a demo for the city of Austin (Wayblazer’s first customer and also where the company is based), a search for “live music” revealed some useful tips about certain venues. It’s the sort of thing you could eventually find after several web searches, but Watson’s cognitive engine makes that unnecessary. WayBlazer searches websites, social media recommendations, and online reviews for its data. When it gives you a tip, you can also dive deeper to see how it came up with a particular recommendation.

“The coolest thing is that these people living in Austin are finding their ‘aha!’ moments,” Jones said in an interview with VentureBeat. “We didn’t think this would necessarily be a good product for people who live in Austin — now we think it is … It’s exposing insights. We think eventually it’ll be insights as a service.”

WayBlazer has received seed funding from the The Entrepreneurs’ Fund, and it’s currently seeking its next round.

Here’s a company that’s bringing Watson to the nonprofit arena. Findability Sciences’ “Impact Measurement & Analysis” (IMA) product uses Watson to give donors an easy way to ask questions about potential investments. In particular, it gives donors a way to measure the impact of specific organizations, which could entice them to donate multiple times.

In a brief demo, Findability CEO Anand Mahurkar used IMA to see if school buses presented any cancer risks. The results: Yup. And just like other Watson-powered companies, you can see directly where IMA is getting its results from.

Watson has quickly become the doctor’s best friend. Several hospitals and health startups are already using it to help improve their medical diagnoses — but LifeLearn is the first company I’ve seen to use Watson for animals.

Just like other Watson health solutions, LifeLearn’s Sofie tool gives medical professionals a quick way to figure out what’s wrong with their patients. The only difference here is that the patients tend to be a bit furry.

The winner of IBM’s Watson mobile developer challenge, GenieMD gives patients and their caregivers a way to keep track of their health profiles across multiple devices, as well as easily diagnose potential issues. The company also builds a personalized profile of every patient, which allows Watson to deliver health suggestions customized just for them. 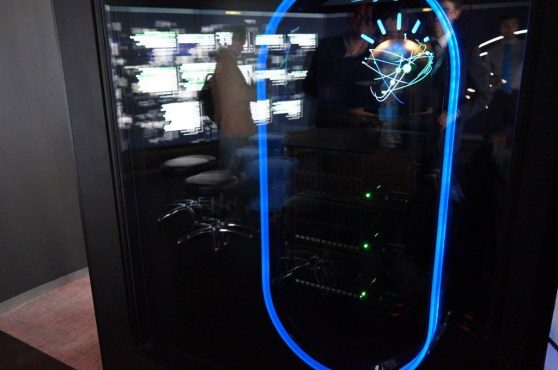 Above: A modern Watson unit

This company is pioneering “cognitive security analytics.” SparkCognition claims its Cognitive Security Insights app handles cyber threats as an actual security researcher, not just as a dumb security service, would. 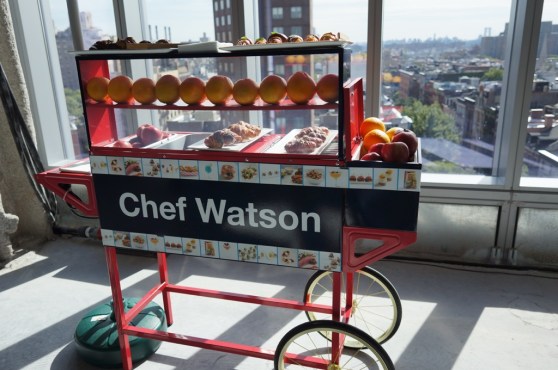 I’ll admit, this choice is a bit of a cheat (and it already made headlines at SXSW earlier this year), but it’s still worth mentioning: Chefs at the Institute of Culinary Education used Watson to create the menu for IBM’s media event yesterday, and it led to some truly mind-blowing flavor combinations. Among the highlights were a pork and apple pie, a beef burrito with chocolate powder, and bread pudding with bacon.

On the face of it, few of those flavors make sense together, and I’d imagine they wouldn’t be among the first choices for most chefs. But Watson gives chefs the ability to predict how well certain flavors will work together, which ultimately unlocks new creative recipe combinations for chefs.