The VRX event last month in San Francisco brought together 500 of the top executives in the VR space across gaming, entertainment and brand marketing to demonstrate the latest hardware, unreleased content and real-world uses of virtual reality. It was one of the most intelligent groups of people I’ve had the pleasure of hanging with in some time.

We learned a great deal about this nascent VR industry during the two-day conference in San Francisco. Here are my six key takeaways. 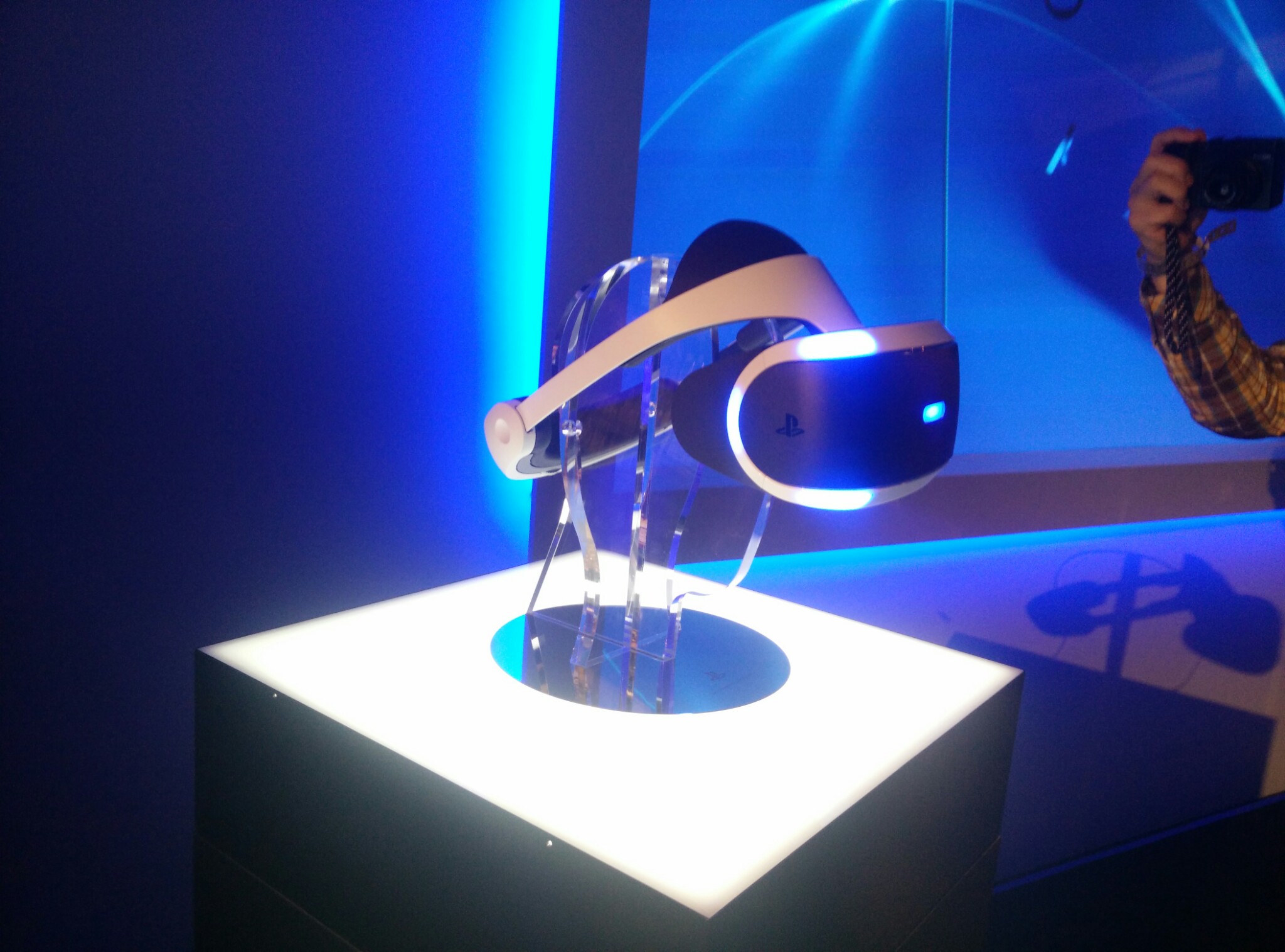 Oculus VR (with its Rift headset) and Samsung’s Gear VR might be getting all of the attention now, but Sony will be the talk of the town soon enough. Why?

GamesBeat reported November 25 that Sony has sold more than 30 million PS4. Sony has been beating its forecasts every quarter, and it’s also expecting sales to be even higher in Q3 2015. If Sony continues to live up to its forecasts, they will have sold 38.8 million units by March 2016. That’s about the time Oculus will launch the Rift, and it’ll be in competition with HTC and Valve with its Vive VR for a much smaller audience of performance PC owners.

Samsung, on the other hand, has sold 45 million Galaxy S6 and S6 Edge phones globally, as of June reports. Galaxy Note 5 sales have yet to be reported on since its August release, but initial sales won’t affect that number significantly. Expect Samsung to see much more competition on the mobile side from the likes of Cardboard, MergeVR, and even Lenovo, too.

Yes, Samsung will have more VR compatible units out there, but one must take into account the demographic difference between Galaxy owners and PS4 owners. The latter group is likely to have a higher proportion of consumers looking to purchase VR headsets.

PlayStation also has the Move controllers, which I tried in the PlayStation VR booth at VRX. I played an awesome first-person shooter called The London Heist, and it was one of the more compelling VR experiences I’ve experienced. And don’t forget the access Sony has to incredible content through Sony Pictures Entertainment and Sony Music Entertainment. What does it with it? I don’t know. But it’s there, and it’s something neither Oculus nor Samsung has.

Pay close attention to Sony. They’ll make a big splash in 2016 that will make waves over the next few years.

2. Social VR is going to be huge, and that’s where most revenues will come from 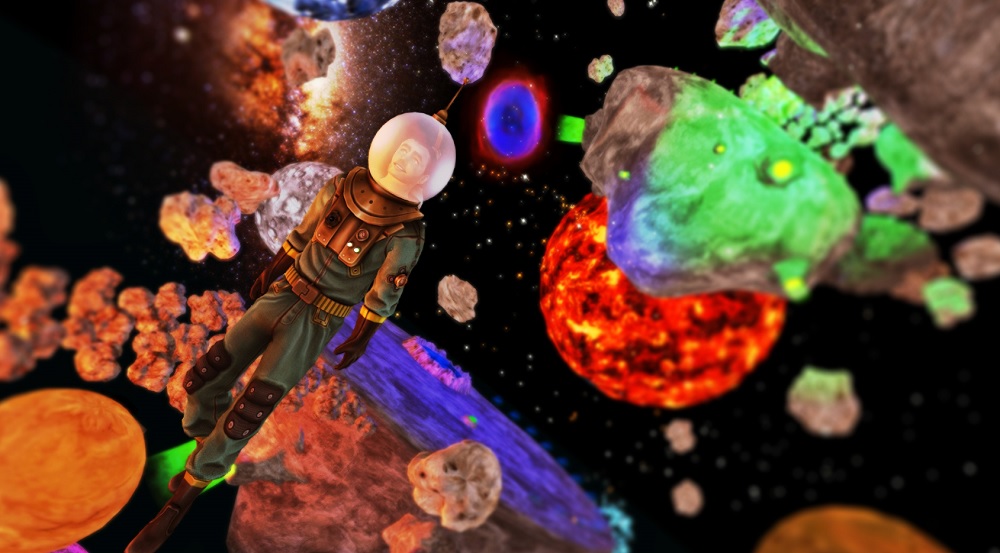 Above: Second Life can put you in space — and social VR may be ripe for such experiences.

I had the pleasure of moderating the Social VR panel, and man, was it tough. What is true privacy in VR? How important are avatars? How do you moderate and deal with trolls and spam? How do you keep your users engaged? So many questions, and so few answers based on facts and expressed with utter confidence. We still have so much to figure out when it comes to social VR, but one thing VRX taught me is that it will be huge.

Philip Rosedale, the founder of Second Life and founder/CEO of High Fidelity, explained on our panel that with only a million users, the Second Life economy is nearly a $500 million/year product. Current Second Life CEO Ebbe Altberg backed up that figure at the Web Summit in Dublin a couple of weeks ago, stating that it has a GDP of around $500 million, and users cashed out a total in excess of $60 million last year. That’s an average of $500 per user, and those numbers are happening on a platform that today is a dozen years old and constrained by a number of factors. Could you imagine if Facebook showed those kinds of numbers?

The major players in the social VR space are going to be the next big companies of our generation. We will see multibillion dollar acquisitions and IPOs of social VR companies that will be much larger what we see today from leading social media companies. That said, there are still many solutions on the hardware and software side that need to be developed, and issues on the psychological level that need to be figured out before we can get there. 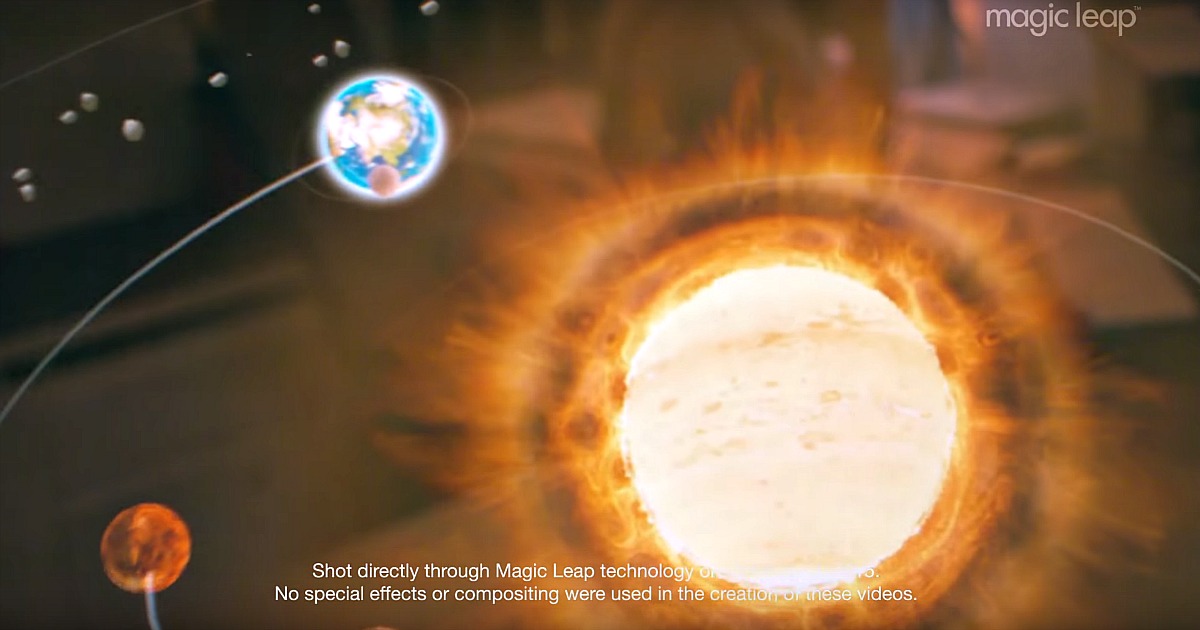 Above: Magic Leap demo of the solar system.

Games may be the first big market for consumer VR, but there’s a whole lot more to it than games. Virtual reality is transforming storytelling, medicine, education, design, and more.

VRX did an excellent job of expanding the conversation outside of gaming. Howard Rose, the CEO of DeepSstream VR, gave an eye-opening presentation on VR for pain relief. Graeme Devine, the chief creative officer at Magic Leap, shared his heartfelt story on what it means to work on building software that exists in the world with you.

Storytelling was a hot topic of the conference, too. Reps from Gatorade and Cedar Fair sat with DODOodocase CEO Craig Dalton to talk about VR for brands. Cosmo Scharf sat with VR content leaders to discuss what it takes to create truly compelling stories in VR.

As a platform that doesn’t even have a consumer product in the market yet (excluding Cardboard), it is incredible to see how rapidly it has verticalized. Virtual reality is not the next 3DTV, or smartwatch. It is the future of computing. VRX helped make this clear. 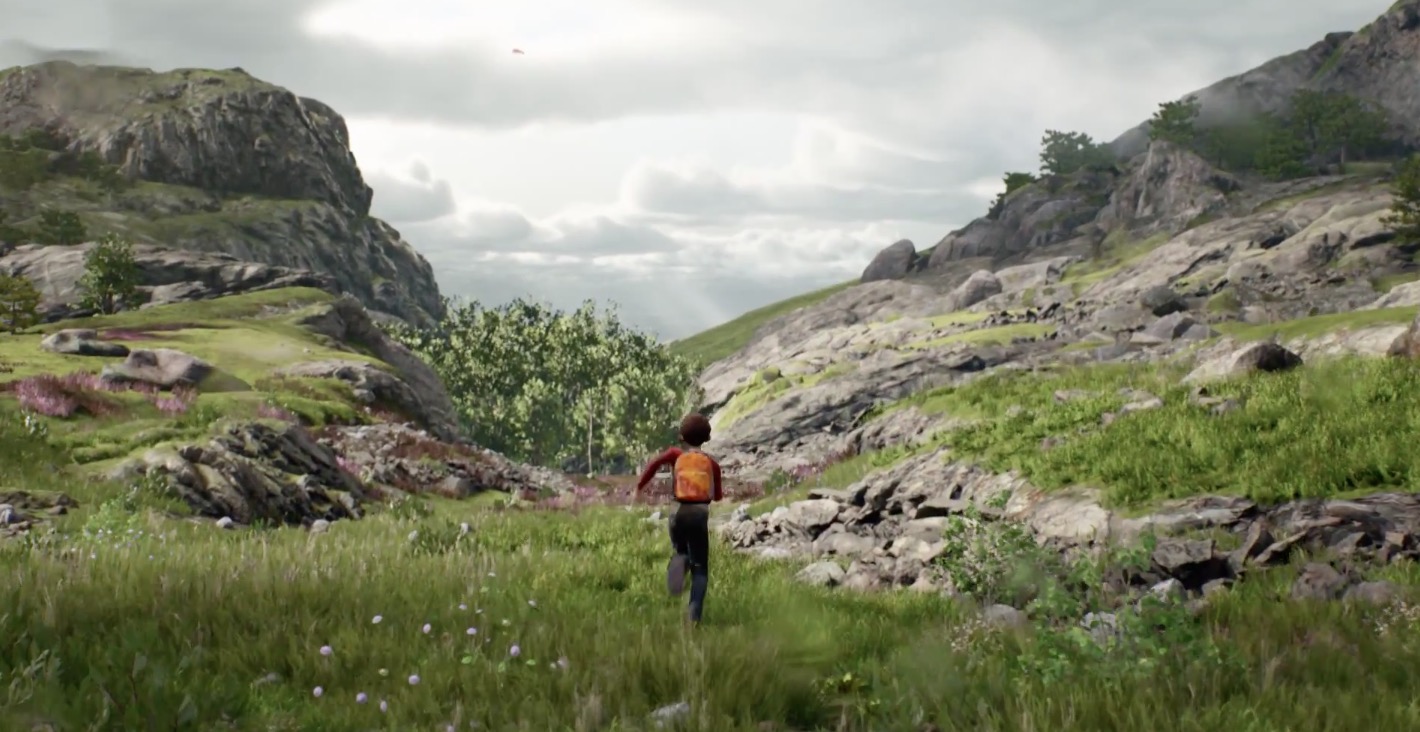 Above: The same engine that powers this could train the next generation of warfighters.

The CEOs of the game-engine companies Unity, Epic, and Crytek all spoke at VRX — their enthusiasm toward the new medium is intoxicating and speaks volumes to the massive potential for rich VR content development going forward. Yet we still have a long, long, way to go to make these tools more open and available.

Developers still don’t have the ability to build VR inside of VR, and for the most part VR content creation is still only available to those with game developer skill sets. When a new platform emerges it is for a select few to build on. The developer community, the people who have the skill sets and talents necessary to transform an idea into a working prototype. As these tools get lower barriers to entry, we will begin to see an even greater proliferation of VR innovation.

This is crucial to the future of VR, and I have a lot of thoughts on this topic which I plan to go in-depth on in a later post. I’m still waiting for someone to build me a VR wireframing/mockup tool. (John, Tim, Cevat — if you’re reading this, help a brother out.)

5. Most investors think VR is cool, some are starting to put their money where their mouth is 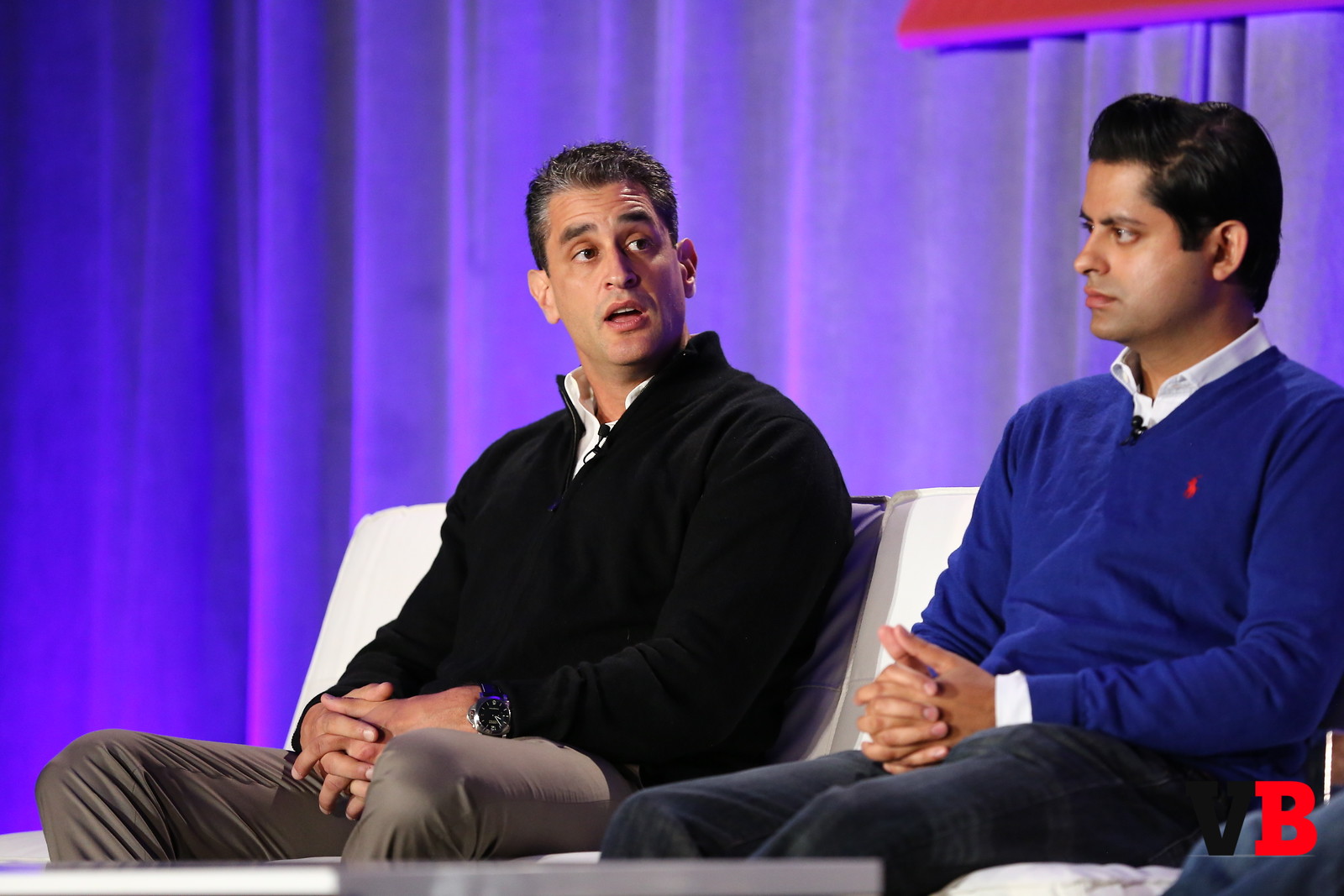 Joe Kraus, an investment partner at Google Ventures, said during his panel, “I still don’t put on a VR headset often, and that’s a signal.”

I share the same feeling as Joe on this one. There just aren’t enough compelling reasons to want to put on a VR headset every day yet, and that makes investors nervous. It’s still way too early to tell what’s going to happen.

Even though a consumer product has yet to hit the market, the investors at VRX have been relentlessly looking at deal flow in search of the amazing teams solving big problems. Google Ventures has made five VR bets to date, including High Fidelity and EmergentVR. Sunny Dhillon over at Signia Ventures is a hardcore gamer, a total VR fanboy. Signia has made one VR bet so far, in a consumer media platform called 8i. Michael Yang and Comcast Ventures have been active, with investments in Altspace, NextVR , and several others not yet announced. Dylan Flinn, the director of VR & AR Investments at Rothenberg Ventures, is the most active VR investor out of the group on the panel. The Rothenberg Ventures team has made over 25 investments in the VR space.

Amitt Mahajan, the co-creator of Farmville, and his partner, Phil Chen of HTC/Vive, are so confident in virtual reality that they have formed the first fund 100 percent focused on VR & AR startups, called Presence Capital. I think they are onto something. 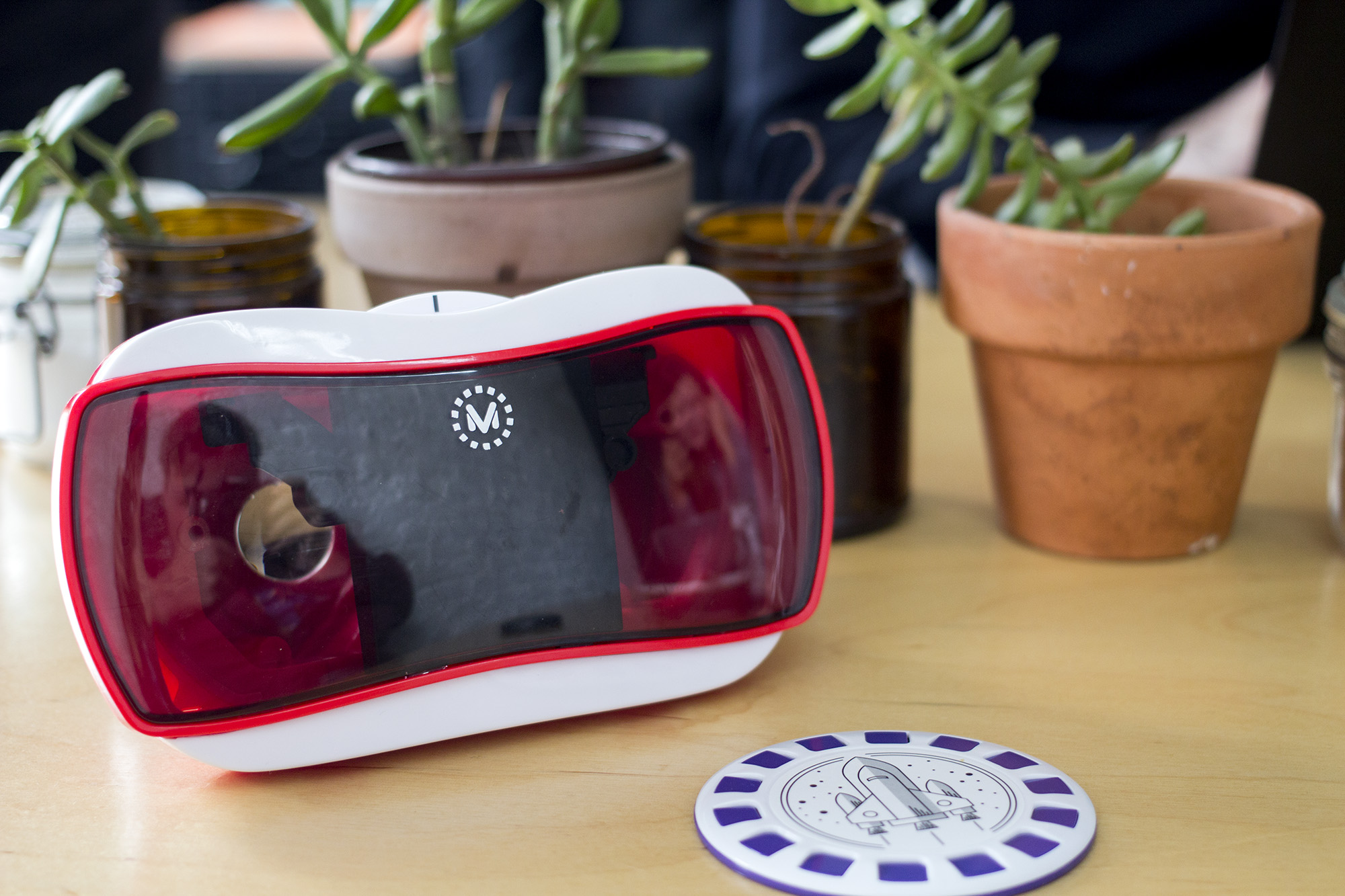 Above: The new View-Master from Mattel.

I noticed something beautiful while walking the expo floor at VRX. Every single modern head-mounted display was present. Every version of the Rift (DK1, DK2, Crescent Bay, EV1), Gear VR (Note 4 and S6 models), PlayStation VR (Morpheus), the HTC Vive, many Cardboards and even a Mattel View-Master were in the building.

Schell’s No. 1 prediction for VR. I couldn’t agree more.

Since Oculus was successfully funded on Kickstarter back in August 2012, we have come a long way. The speed at which Facebook, Samsung, Sony, and HTC are developing hardware is impressive, and a great testament to how seriously VR is being taken by the major players in the space. VR is here, and here to stay this time around.

The conference was enlightening. The speakers were passionate, and the vibe in the room was electric the whole way through. I would have liked to see wider breadth of experiences showcased, particularly storytelling experiences like players like VRSE, InnerspaceVR, Emblematic Group and Jaunt, but you can’t always get what you want. What I did get was a group of high-level executives and decision makers talking about the future of a medium I believe has the power to change the world.

I’d pay for that any day of the week.

Nick Ochoa is the co-founder of UploadVR, and a thought leader who’s passionate about the VR industry and startup scene, and he writes about his thoughts on Medium.