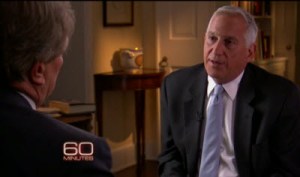 Steve Jobs’s biographer answered questions about the Apple founder’s life on CBS’s 60 Minutes last night, and now you can watch the interview online.

The special interview was recorded about two weeks after Job’s unfortunate death. The version posted online has several extras that weren’t in the original broadcast.

Walter Isaacson’s biography, titled Steve Jobs, goes on sale in brick and mortar retail stores Monday morning. However, Kindle owners and those that have access to Apple’s iBooks can already purchase digital copies of the book.

Isaacson interviewed over a hundred people in Jobs’ life, including acquaintances, close friends and family members. The author interviewed Jobs himself over 40 times for the book.

Here’s an excerpt from the 60 Minutes interview:

Kroft: Explain to me how somebody who was a hippie, a college dropout, somebody who drops LSD and marijuana goes off to India and comes back deciding he wants to be a businessman?

Isaacson: Jobs has within him sort of this conflict, but he doesn’t quite see it as a conflict between being hippie-ish and anti-materialistic but wanting to sell things like Wozniak’s board. Wanting to create a business. And I think that’s exactly what Silicon Valley was all about in those days. Let’s do a startup in our parents’ garage and try to create a business.

Kroft: So we don’t have to work for somebody else?

Isaacson: Right. And Steve Jobs wasn’t all that eager to be an employee at Hewlett-Packard.

You can watch both part one and two of the 60 Minutes interview with Isaacson on CBS’s website or the network’s YouTube channel.