About 65% of adults, or more than 164 million people, play video games in the U.S., according to a new report by the game industry trade group Entertainment Software Association.

Each year, the percentage of Americans playing games has been going up, as non-gamers die off and younger folks start playing games. The ESA collects data for its annual report, and this year’s survey is entitled “2019 Essential Facts About the Computer and Video Game Industry.”

The ESA said that three-quarters of all Americans have at least one video game player in their household, and they play across a variety of platforms. 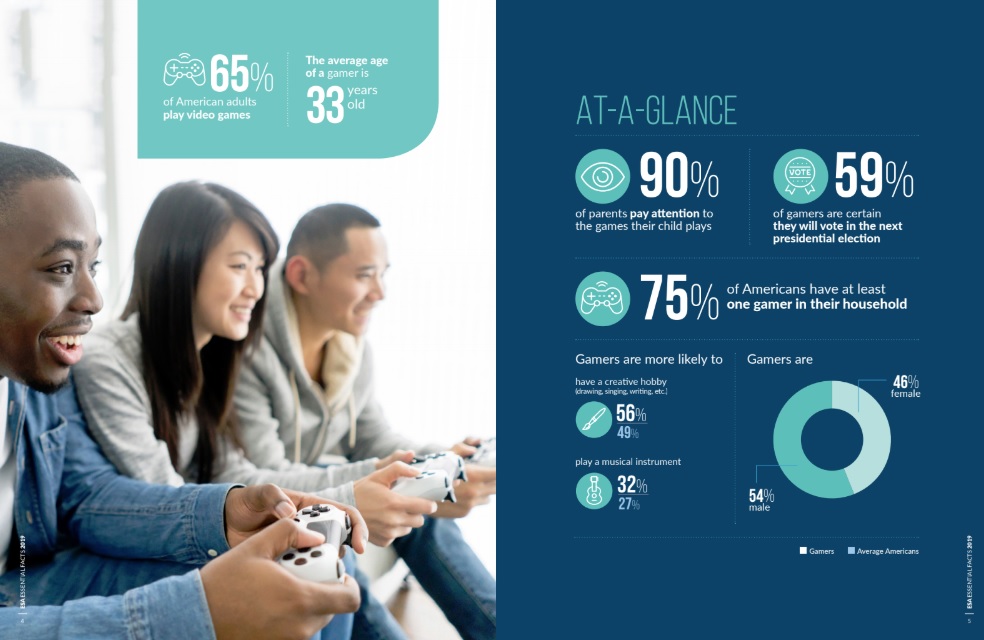 Above: More data on gamers: 90% of parents monitor what kids play.

The report said 93% of American households own a smartphone, and of those, almost half of them use it to play video games. After announcing a record-breaking $43.4 billion in U.S. industry revenue for 2018, the ESA dug deeper into data that tells more about the individual Americans who enjoy video games and their lifestyles to better understand their interests.

The study shows that these individuals represent a cross-section of the American population and are diverse, active, and engaged in their communities and see video games as a positive force in society, the ESA said.

79% of those surveyed said video games provide them with mental stimulation as well as relaxation and stress relief (78%). Video game players are engaged civically, with 59% reporting they will vote in the next presidential election. 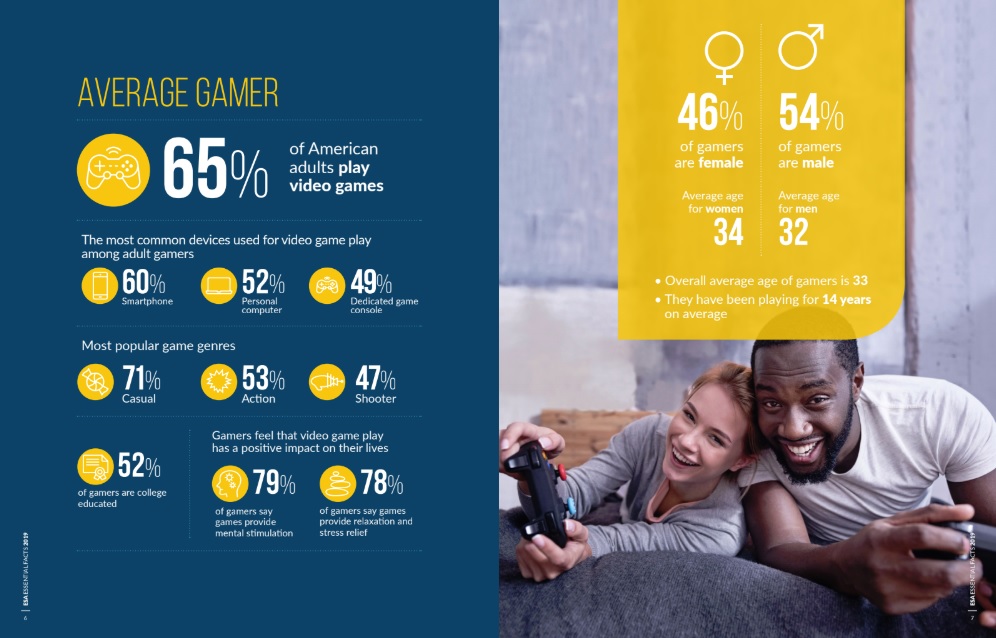 Above: The ESA says the average age of gamers is 33.

More than half (52%) are college educated. They are also just as likely to have hobbies and interests outside of video game playing, with 56% of video game players more likely to have a creative hobby such as drawing, singing, or writing. Video games bring people together in a fun, innovative way with 63% reporting that they play games with others online or in person.

“This is the golden age of video games. They are the leading form of entertainment in American culture. They enhance our interconnected experiences and relationships with one another and redefine the intersection between humans and technology,” said acting President and CEO Stanley Pierre-Louis with the ESA, the trade association that represents the U.S. video game industry. “Americans play video games to have fun, relieve stress, learn, and spend time with family. This innovative form of entertainment touches on every part of society and improves how we play, work, and live.”

Pierre-Louis spoke at our GamesBeat Summit 2019 event on parents, screen time, and game addiction — in a talk moderated by Keisha Howard of Sugar Gamers. I’ve included a video of that talk in this story. 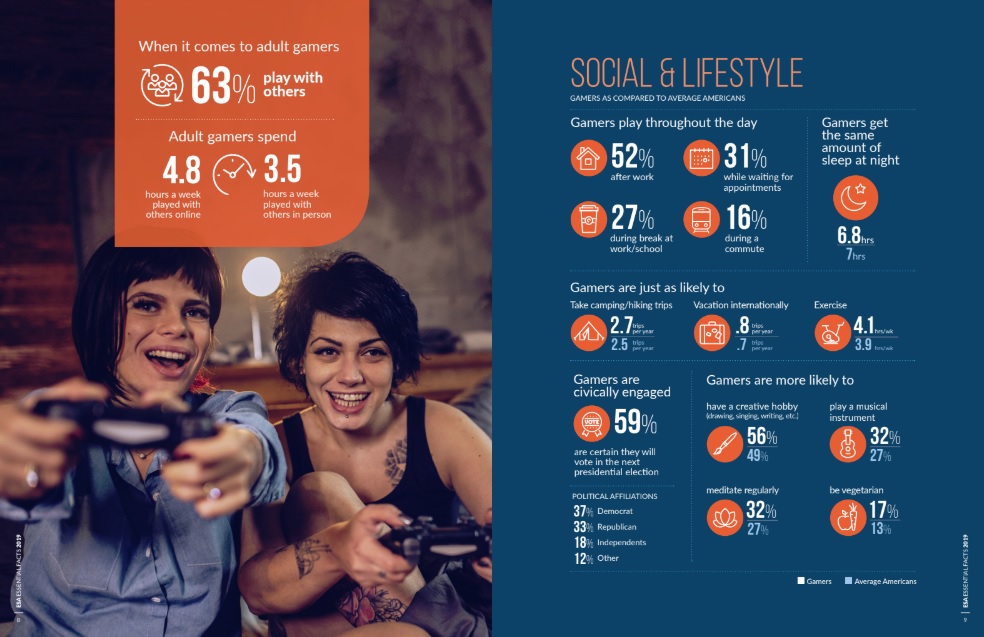 Above: The ESA says 52% of people play games after work.

74% of parents believe video games can be educational for their children; 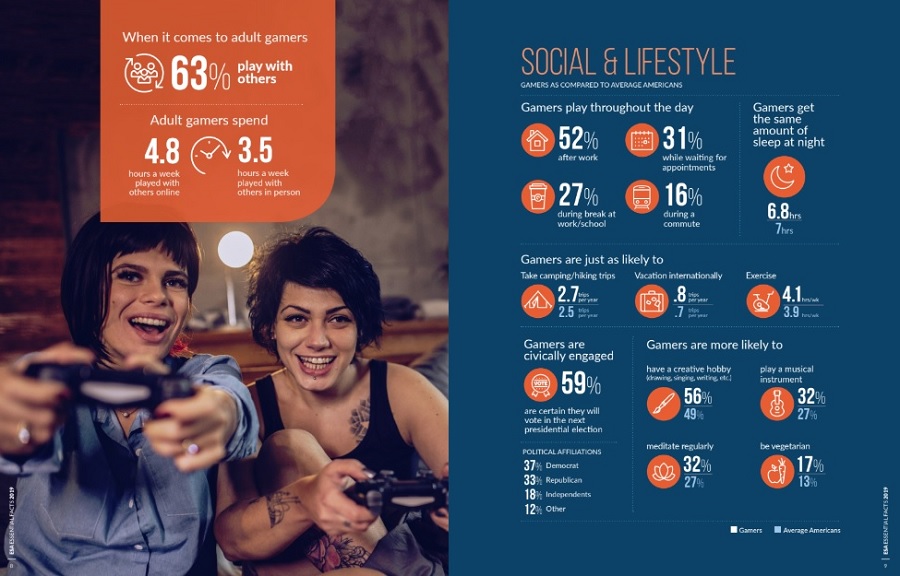 Above: ESA: 63% of gamers player with others.

The U.S. video game industry is one of the nation’s fastest-growing economic sectors and provides more than 220,000 jobs in all 50 states. More than 520 colleges and universities in 46 states offer programs or degrees related to video games.

Read the full report 2019 Essential Facts About the Computer and Video Game Industry here. Ipsos conducted the research for the ESA and surveyed more than 4,000 Americans.