Listen to chatbot evangelists long enough and you will hear some say that one day it will be completely normal for people to chat with brands and businesses. According to the Mobile Messaging 2016 report released Tuesday, it’s already happening.

A survey of 6,000 people from nine countries included in the report found that 66 percent of consumers have used a chat app to communicate with a business. Among SMS users, that number grows to 74 percent. 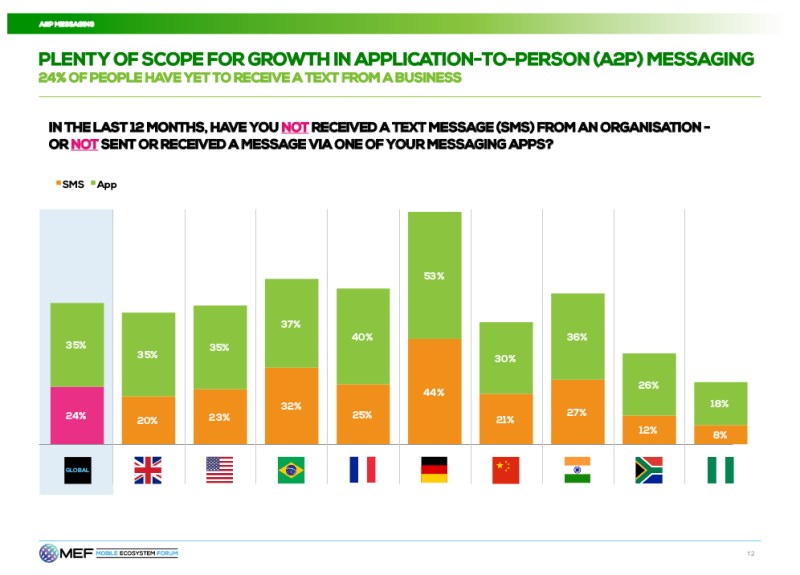 When respondents were asked if they had been in touch with a business in the last year, 35 percent said they had done so with a messaging app and 24 percent had done so via SMS. (That experience varies from country to country.)

Among top forms of communication with a business, one in three consumers has received messages or chatted with a banking or financial institution, while 30 percent have used their phones for two-factor authentication.

Health messaging is a key area of growth, the study found, since 15 percent of consumers studied globally have received a message from a healthcare provider via SMS, and 12 percent via chat app.

The most popular services for communication between individuals surveyed are Facebook Messenger (56 percent), WhatsApp (50 percent), and SMS (42 percent).

Despite the dominance within chat apps of tech giants like Tencent and Facebook, the report asserts that mobile messaging is not yet a mature market. This, plus the ease with which a person can download a chat app, means that the market is still growing.

“So there does seem to be scope for new apps to grab some market share. And the ongoing rise in smartphone ownership, and the rollout of 3G and data bundles should provide market opportunities for all,” the report found.

The study comes from mobile trade group Mobile Ecosystem Forum (MEF) and was compiled as part of its Future of Messaging program. MEF is based in London, and supporters include Twilio, SMS company Mblox, and others around the world.

Messaging on any channel is a “clear opportunity for growth, with 24 percent of SMS users and 35 percent of chat app users currently unengaged,” said MEF CEO Rimma Perelmuter in a statement.