Now and then, you’ll hear a statistic or fact that is so striking, it’s hard to ignore.

“As many as 70 percent of CRM implementations fail,” one Butler Group analyst said, according to analyst Michael Krigsman, who quizzed The Butler Group about this very stat back in 2009.

The media grabbed hold of those words like a bulldog on a new bone and, without checking the quoted report (or even checking if the quoted report existed) ran with it. You know the sort of thing … like when John Lennon was asked whether he considered Ringo Starr to be the best drummer in the world and he supposedly answered: “he’s not even the best drummer in the Beatles.”

The problem is this: Lennon never dissed Ringo, and the Butler Group never reported that statistic.

You won’t find it in any report. The closest we can get is a study in July 2001 (Real CRM: Pitfalls and Potential), and that doesn’t state anything of the sort. But it is the kind of statistic CRM consultants love to quote, as it aids their case when selling services.

In a new report launched today, we’ve discovered — with high accuracy and confidence — that this oft-quoted number couldn’t be further from the truth.

Before revealing the results, allow me to explain how we got where we are now.

The State of Marketing Technology report from VentureBeat’s research arm, VB Insight, is our view on the entire martech landscape — all 1,800+ products. With updates four times per year, we are keen to ensure that we approach the industry from a number of new perspectives, because much of the existing research in the space left us wanting.

With some reports, for example, the focus is on one type of marketing technology, such as marketing automation, or conversion rate optimization. With others, the focus is on looking at survey responses or interview data conducted with just a few of the largest companies in the world.

If you believe one of the “Big 4” analyst firms, nearly 70 percent of businesses are either using a marketing automation platform or currently implementing one. The fact that this study takes in data from 199 respondents that are employed by “best-in-class” companies (read “Fortune 500”) is lost on most people that choose to quote the stat.

In contrast we know that, by looking at data from 3 million businesses in our Fall 2014 report, that the truth — a statistically significant number across all sizes of business, and 151 industries — is much harsher. Marketing technology (as a whole) only has 4.1% penetration, let alone marketing automation. 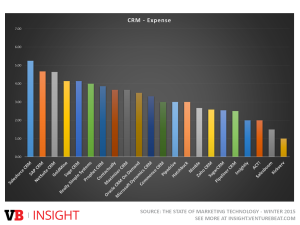 It seems that if you want to get your crappy stat some attention, set it to 70 percent.

In our Winter 2015 report, available today, we have again taken data and responses at both ends of the spectrum. We combine big data from partners such as G2 Crowd, Dashlane, AOL Platforms/Convertro, Glassdoor, PayScale, RazorSocial, and Skimlinks with respondents to our own surveys that represent what we call the ‘Fortune 30 million,’ and we look at the entire industry instead of just a sector.

In the process of analyzing all this data, we discovered that the failure rates were much lower than those typically quoted.

Of 2,119 respondents from G2 Crowd’s data, only 77 (3.6 percent) stated that they had received no payback on their technology investment. A lack of payback could be for a variety of reasons. Maybe the technology isn’t working for them. Maybe it isn’t implemented properly. Maybe it was installed recently, and while it will gain a return, it is too soon to tell.

Without going into all the math (I do that in the report), it means that we can state the following: With a high level of confidence, between 1.47 percent and 5.73 percent of marketing technology implementations fail to provide a return on investment over a 3.5-year life cycle. It might not sound as sexy and compelling as “70 percent fail” … but at least it is the reality.

Getting payback on an investment is critical in marketing. If everything you do as a marketer, including buying technology to help you do it, doesn’t add to your organization’s profitability, you should probably not count it as a success.

So what we’re seeing is a far cry from the 70 percent CRM failure everyone loves to quote, and note that the “failures” we did find are in Marketing Automation, CRM, Email Marketing, Social Media Management, Customer Support, Content Marketing, Analytics, and ecommerce. Not just CRM.

You can find out more about VB Insight’s State of Marketing Technology: Winter 2015 report here.