2016 was a great year for unicorns, such as Airbnb, Magic Leap and Didi, who snatched up enormous sums of money. Not to mention IPO candidates such as Snapchat, for whom 2017 is filled with great  opportunities.

Since we at Zirra analyze startups for a living, we decided to share some of our top insights from 2016. These takeaways are derived from data-driven research and our proprietary AI tech for analyzing companies — and may challenge your perceptions of the industry as we approach the entry of 2017.

1. Why we cut Airbnb’s valuation in half

Too many bad reviews, dropping out of first place on the “best places to work at” list on Glassdoor, and regulatory fist fights have finally seemed to create a noticeable impact. Google searches for Airbnb, an excellent and straightforward sentiment indicator, have dropped considerably during the second half of 2016. Also, far beyond the seasonal expectation. Airbnb has halted its new hirings. Based on our data, the common $30B valuation for Airbnb was far too high compared to its current, real, value. Don’t get us wrong, Airbnb is a large player and it is here to stay, but by using the most current data, sentiments, and trajectories, we place its value at $14B. In spite of this, Airbnb’s future seems bright, and the company keeps rising above Expedia, Priceline, and Tripadvisor in generating general interest. Further, their new business model challenges Tripadvisor with lists of recommended restaurants and attractions and a curated bank of guided tours. 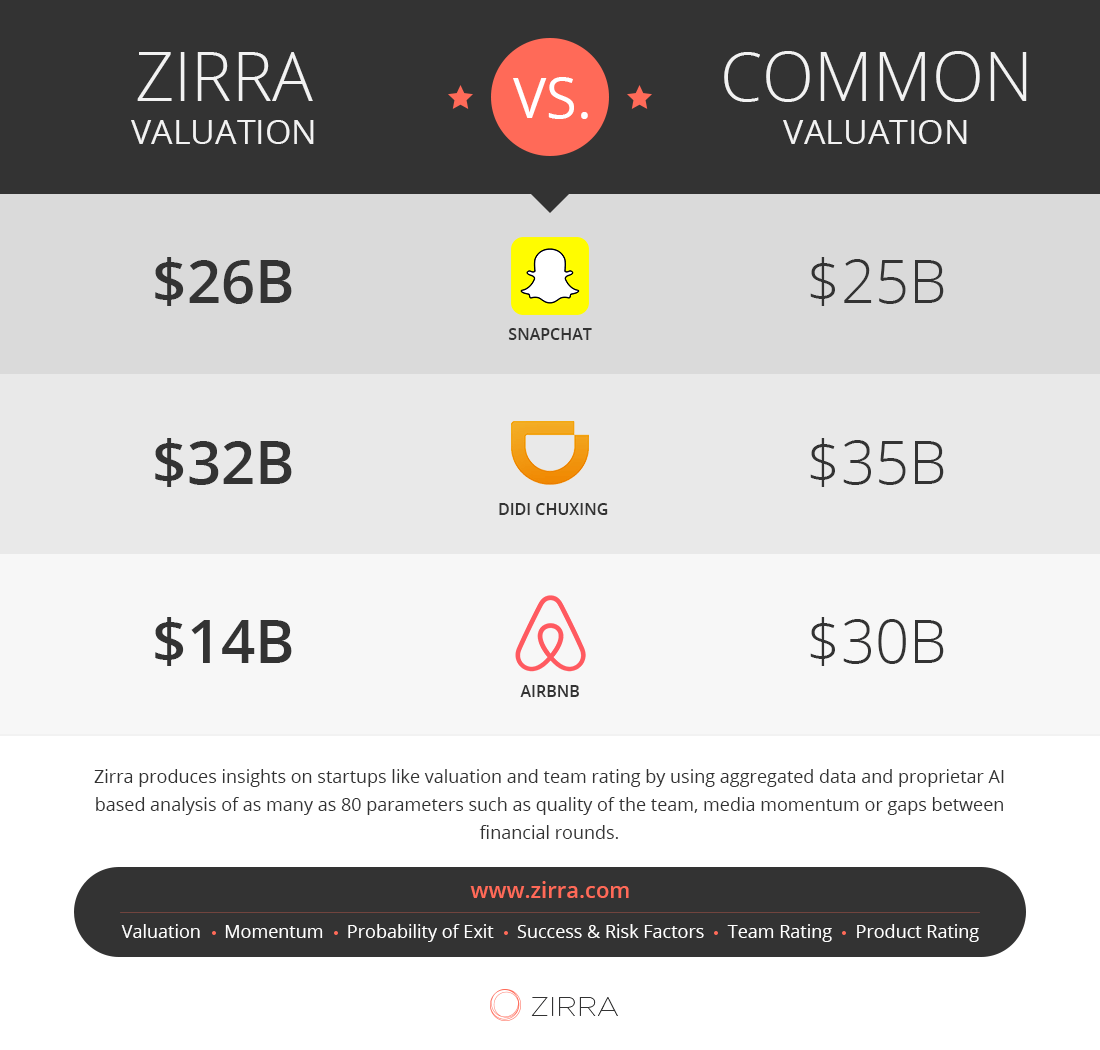 The much-anticipated Snapchat IPO will probably proceed as planned in 2017. We believe that Snapchat’s valuation at exit can rise as high as $26 billion, a whole billion more than the valuation estimated by the media. Valuation might rise higher if the company raises more money than initially expected and if its revenues grow at an accelerating pace during the interim period. Our algorithms base their estimation on the surge in Snapchat’s revenue after launching a blitz of successful revenue streams such as sponsored geofilters, animations, videos, and native ads, which have produced more than $300 million this year only, 6 times more than in 2015. However, some risk factors might hinder Snapchat’s galloping success, such as Facebook’s copycats features embedded in Instagram and Whatsapp, and a lack of leadership as reported by the remote, Venice Beach, employees, feeling alienated by the management.

The Chinese ride-hailing app took over the local market after acquiring Uber’s China division, winning the campaign for China, but is very far from global domination. Zirra’s algorithms value Didi Chuxing at $32 billion, a number that expresses Didi’s victory in China. But the list of red flags regarding its future is noteworthy: unclear plans for expansion outside of China, sudden regulation implemented by the central and municipal governments, and a lack of autonomous cars strategy. Uber may have renounced China but it is invested deeper in the long-term future of the automotive industry.

4. The WordPress of the VR industry

General interest in VR has experienced a notable surge since 2015, after maintaining a decreasing trend up until 2014. That is not a big surprise as Deloitte predicted that VR would have its first $1B year in 2016, with about $700 million from hardware sales and the remainder from content, and in a year that has yet to see the highly anticipated Oculus VR headset. Headsets are great, but how will content be created? Who will be the WordPress or Wix of VR, allowing people to create, upload, edit and launch VR content? Look at companies such as Vyuu, VsportR, Virtually Live, Next VR and IM360. A leader in the field is Byondata, currently valued by Zirra at $7-$9 million, and $50-$70 at a potential exit. Still, it is too early to know if Byondata will be the leading platform, as VR content platform advantage can come to play only at a large scale.

5. The rise of flat-rate food and beverage services

The “all you can consume” trend from the 80’s returns in full force with apps that let you order food and beverage on an unlimited basis for a monthly fee. Inspired by Netflix, MealPal lets subscribers get unlimited weekly lunches for $99-$119 a month from restaurants who are already members of the network. Another app, DripApp, signed up 250 coffee shops in London, while CUPS has formed partnerships with over 210 independently owned coffee shops in NYC. At Zirra, we estimate CUPS’ valuation at already $13-$17 million. However, the business model is dangerous, as  ClassPass — a flat-rate subscription for gyms that raised $84 million — demonstrated by having to increase subscription fees due to high costs, sparking outrage from customers and the press. Flat-rate services will have to find their efficiency point just as on-demand and delivery services had to.

As the pendulum of innovation goes back to robotics, hardware, automotive, and space, Satellite startups are mixing all of the above together. Two of them, Effective Space (valued at $80 million) and Vivisat ($200-$250 million), are developing small spacecraft that can dock with communication satellites, refuel them, and increase the lifespan of a satellite.  As every startup in the aerospace field, those two are suffering from several factors including competition imposed upon them from aerospace giants such as MDA, a capital-intensive industry, an enormous price of error, heavy regulation, and the rules against the weaponization of space.

7. Adtech Is not dead after all

On the face of it, there’s some bad sentiment around adtech for the last two or three years. Those who raise money for their adtech startup already know how hard it is. But the definition of adtech is changing as the industry tries to get rid of its bad habits like fraudulent traffic and manipulation of UX. At Zirra we marked, for example, native recommendation engines as a rising field, with companies such as Taboola (who grew from $377 million to $936 million in valuation according to Zirra) and Outbrain (growing from $487 million to $813 million from January to September 2016) providing for readers who would like to see content more than ads. Moreover, advertising technologies survive through making their way into marketing technologies which are more acceptable by investors: marketing analytics, cross device, and mobile marketing. According to Zirra, Marketing analytics platform Datorama’s valuation grew to about $400 million after raising $32 million several months ago, while mobile marketing platform mParticle’s valuation grew to $150-$200 million. 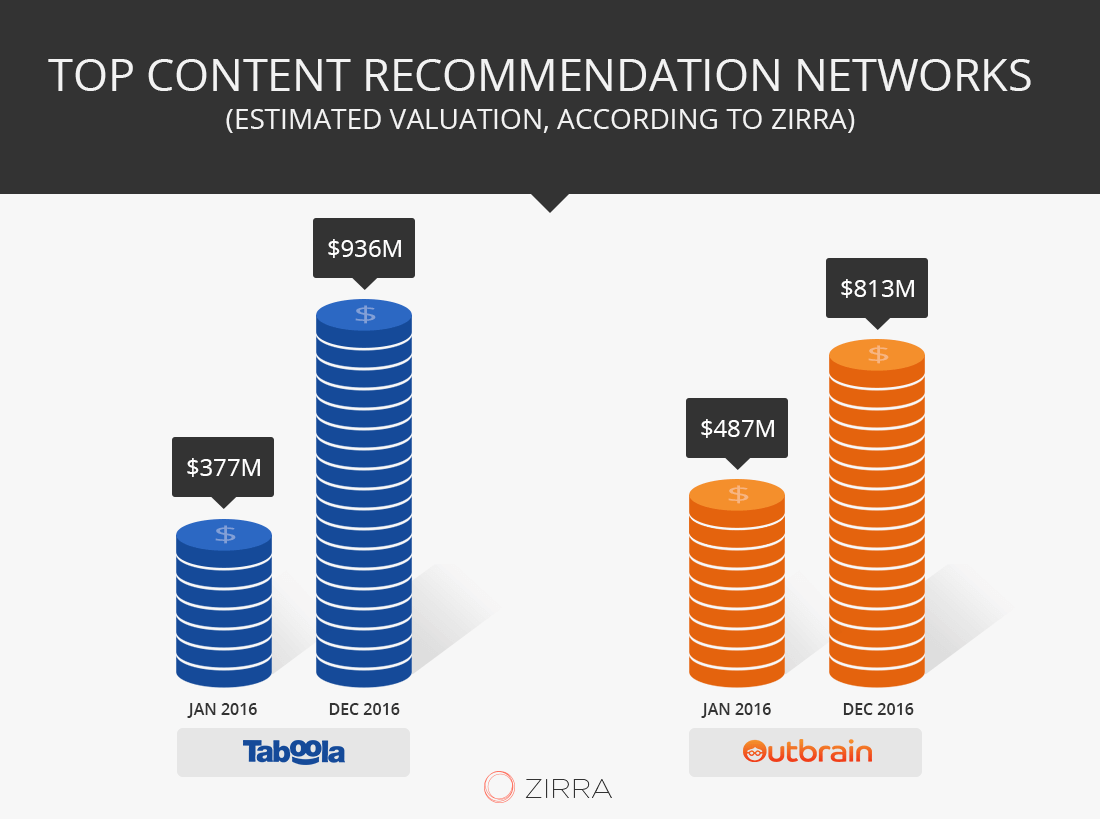 8. The echo of Amazon’s Echo

NLP-based search engines for ecommerce, as inspired by Amazon’s Echo, are all around us. They are racing to be the next-generation ecommerce search engines that require nothing more than a simple sentence to find you just what you wanted to buy, even if you’re not sure what exactly it is that you want. For example, just say “I want a dress like Taylor Swift wore at the Grammys” and get a bevy of relevant results. Take for example California-based Inferlytics, New York-based AddStructure and Tel-Aviv company Twiggle. The latter, founded by ex-Google and -eBay employees, is worth about $100-$150 million after raising $20 million. Twiggle added Udi Manber, previously Head of Search at Google, and Founder and CEO of Amazon’s search unit A9, to its board of directors. According to the consultancy firm A. T. Kearney, global online sales will grow at a rate of 50 percent in the next three years to reach $150 billion. It is quite clear that Amazon, Google, and Apple are all developing their NLP-based search engines for retail, but a startup may have higher chances of success as it is singularly focused on this sector.

Read more about Zirra’s philosophy of data-driven investment, how to analyze a startup in 10 steps with Zirra, or see what kind of insights you can receive by ordering a report on a startup.

Or search for a startup and order an analysis.

Aner Ravon is Co-Founder and Chief Insight Officer at Zirra.