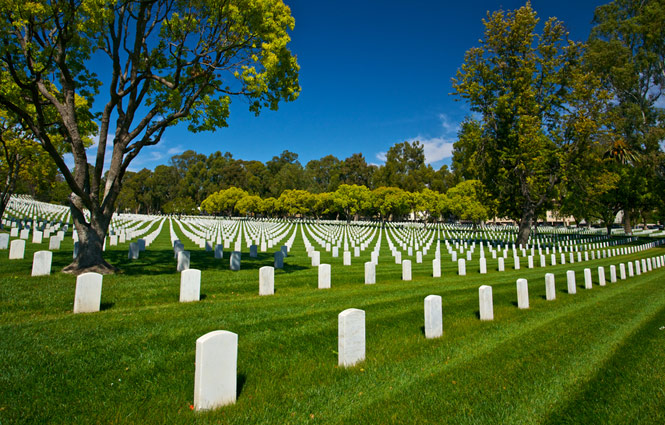 Five months ago, Russ Hearl had a friend pass away suddenly. Hearl found out about it on Facebook, and, going to the friend’s profile page, found several comments that he had posted the very day he died.

That’s when he decided there needed to be a better way to memorialize a fallen Facebook friend.

“I asked myself what really happens to someone when they pass away … and what happens to their profile?” Hearl told VentureBeat. “And, is Facebook the right place to remember them?”

(We’ve considered this question before on VentureBeat … and in fact there have been occasions in which Facebook has declared someone dead a little prematurely.)

Hearl didn’t want to create what he calls a “lame memorial site” at Legacy.com or Tributes. Legacy.com powers the obituaries of many local newspapers and charges about $50/year for a memorial site. Tributes offers a one-photo page, with an obituary, for $10 in perpetuity.

But Hearl decided that Facebook was indeed the right place: the place where many people have lived most of their online lives.

“I really wanted to create a separate space within Facebook to celebrate the lives of those who have passed away.”

So he founded Evertalk. As of today the app has been live on Facebook for about four weeks, and users have created 3,000 memorials. 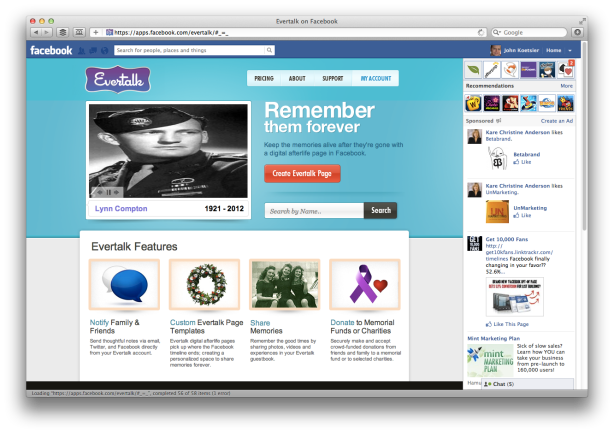 VentureBeat spoke to Hearl about the new Facebook app.

“One of the things that has astonished us is how many memorials have been created for celebrities,” Hearl says. “People like Rodney King, Whitney Houston.” 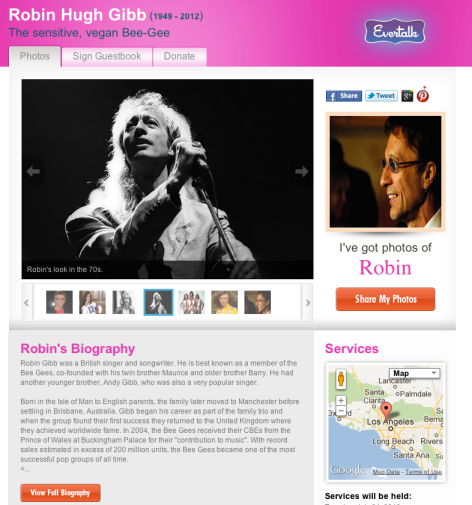 Above: One of the celebrity memorials created on Evertalk

Using functionality already in Facebook, Evertalk allows bereaved users to create photo and video pages, as well as a guestbook. In addition, since funeral and often medical expenses can make the difficult times around the passing of a loved one even more difficult, Evertalk includes an option for a donations page.

There are other options for memorials and obituaries on Facebook, including Legacy.com’s My Memorials and a number of very underutilized obituary apps. Many, like Memorial Candles, appear to be down or discontinued. Evertalk has a very real shot of standing out in this unimpressive competition.

Another option is just leaving the profile up, as is. I know one family who do exactly that for their deceased father. And, every year, his profile comes alive with whispered prayers … messages in a bottle. It’s moving and meaningful.

For those who want a more defined memorial, however, Evertalk is free to install, and users can, of course, browse the memorials for  free.

Those who wish to publish a page can choose either a $2/month plan, or a $29/year plan, which allows unlimited memorial creation. Both offer the first month free. Also, a coming freemium plan will allow completely free memorials, if Evertalk can sell virtual flowers on your page.