Nintendo has one of the hottest holiday gift items of 2016 with the NES Classic Edition (our review), but that system’s short controller cable has created an opportunity for third-party peripheral makers to flourish. And 8Bitdo is stepping up to that challenge.

The NES Classic comes with a controller that has a cable that’s only about 30 inches long. That means you have to sit right next to the system while you’re playing, which is frustrating when you want to sit on your nice couch that’s 10 feet away from your television and don’t want a long HDMI cord lying across your floor a booby trap from Home Alone. 8Bitdo, which has a number of throwback controllers for the NES, Super Nintendo, and PC, is now solving that NES Classic problem with its NES30 Classic Edition Set. This package comes with the NES30 controller and the Retro Receiver for the NES Classic.

The NES30 is the exact same size and shape as the original NES gamepad, but it has shoulder buttons and two extra face buttons like a Super NES controller. The Retro Receiver, meanwhile, connects to the port on the front of the NES Classic and features Bluetooth to connect with the NES30 or a number of other controllers. It’s an all-in-one solution for getting off the floor when you want to enjoy some retro video games but want the option to use a controller that still feels like the one you grew up with.

The NES30 is awesome

Controller technology has come a long way since 1985, and 8Bitdo has put some of that into the NES30. At the same time, this still passes for the original article when you’re holding it in your hands. It has Bluetooth wireless for connecting to your PC or Retro Receiver (it’ll also work with 8Bitdo’s NES and SNES Retro Receivers), and it contains a battery so that you don’t need to have it plugged in at all times.

But this is still an NES controller. The buttons depress with a satisfying thud that is reminiscent of the Nintendo device. The materials that 8Bitdo used to build the body of the NES30 also feel identical to my childhood gamepad.

On top of this familiarity, you now also have a controller that also works as retro gamepad for playing games on the PC. I booted up Another Metroid 2 Remake, and the NES30 worked well with that updated Game Boy classic. I especially love the shoulder buttons, which are clicky and responsive.

The Retro Receiver is even better 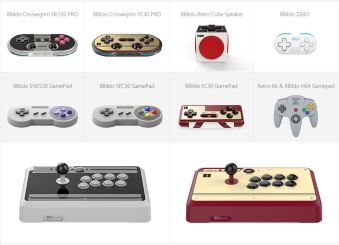 Above: 8Bitdo’s lineup of controllers.

Connecting your NES30 to your NES Classic Edition will require the Retro Receiver, which is essentially a Bluetooth dongle built specifically for the controller port on Nintendo’s mini 8-bit console. Once you hook up the receiver, all you have to do is pair it with the controller. But you don’t have to use the NES30. The Retro Receiver is compatible with any gamepad from 8Bitdo, and the company has a lot of them.

But you also don’t need to use an 8Bitdo controller at all. The Bluetooth chip in the Retro Receiver is compatible with Sony’s DualShock 4 and DualShock 3 pads. You can even use a Nintendo Wiimote or Wii U Pro Controller.

This is crucial because as much as I love having a retro-style controller, modern gamepads are far more comfortable. And if I’m going to sit down for hours to play something like Final Fantasy or The Legend of Zelda, I may want to opt for a DualShock 4 instead.

The only real negatives with this set is minor. I noticed that the original NES gamepad seems to use a much more solid plastic for its A and B buttons. The NES30 uses something that feels a tiny bit cheaper. And the D-pad has a bit of a wobble to it that is not present in Nintendo’s joypad. The directional pad on the original device has a firm, even resistance that 8Bitdo can’t quite match.

Even with its small problems when compared to the original device, the NES30 is a great way to experience classic Nintendo games. If you get the bundle with the Retro Receiver so that you can use the NES30 on your PC or NES Classic Edition, you can maintain a level of authenticity without having to suffer through a life of tiny cables. But then having the option to also use a more modern input to play old games is the confetti raining down at your Nintendo-themed retro party, and it makes the NES30 Classic Edition Set a must-have addition for anyone who owns the throwback system.

8Bitdo sent GamesBeat a sample unit for the purposes of this review. The NES30 Classic Edition Set is available now for $40.