Excitement is building about a possible manned mission to Mars, and virtual reality is going to play a role. Startup 8i and Time Inc. announced a partnership to bring holographic messages from former astronaut Buzz Aldrin and musician Reggie Watts to VR in early 2017.

Time will use 8i’s holographic imagery technology to create lifelike versions of Aldrin and Watts in VR, as part of Life VR‘s “Message to Mars” VR applications. In addition, NASA is using the 8i tools as a way to mitigate the effects of isolation in a future Mars mission.

Life VR, which is Time’s multiplatform VR brand, will deliver inspirational holographic messages related to the Mars mission, with Aldrin sharing his personal experience and vision for sending humans to Mars, and Watts performing an improvisational humorous song in his trademark beat-boxing style.

As NASA prepares for its journey to Mars in the mid-2030s, a group at the University of Hawaii Mars simulation site conducted a study on the effects of long-term isolation on an international team of six scientists, as well as the potential for virtual reality as an asynchronous communication tool. In a first of its kind pilot, the subjects at the HI-SEAS facility received the holographic recordings of Aldrin and Watts, which, when viewed in virtual reality, simulate true presence and could help mitigate the feeling of isolation.

“As humans embrace the extraordinary commitment to leave earth and make Mars their home, virtual reality will be a very important way of staying in touch,” said Aldrin, in a statement. “What could be more stimulating to students, scientists, and political leaders on Earth than to experience life on another a planet, and for the astronauts journeying to Mars to receive messages from back home? I’m honored to leave my message behind for these courageous men and women who will go down in history in a way that no one ever has before.”

“Time and the iconic Life brand have a celebrated history of covering space, and there could not be a more fitting home for ‘Messages to Mars’ than Life,” said Mia Tramz, managing editor of Life VR. “Sharing these messages from Buzz Aldrin and others on our platform is another example of the powerful experiences and unique storytelling we’re bringing to viewers.” 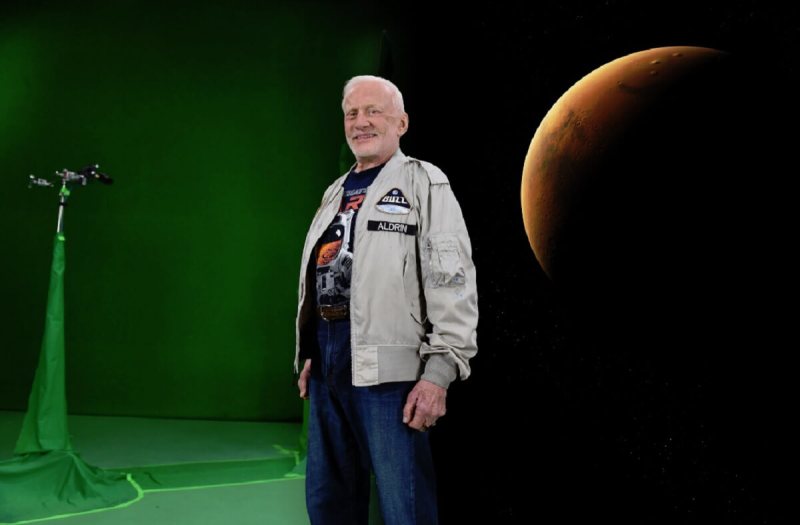 Above: Buzz Aldrin in “Message to Mars.”

8i software enables high fidelity holograms that eliminate the uncanny valley effect of computer-generated humans, giving the viewer an unprecedented sense of presence and emotional connection with the person they’re watching, according to 8i.

“In 20 years when mankind takes the bold leap of journeying to Mars, it’s hard to imagine that human communication will be as confined to the flat screen,” said Linc Gasking, cofounder and CEO of 8i, in a statement. “We’re excited to enable future generations of astronauts to communicate with loved ones, relive memories, and experience archived messages from historical figures like Buzz Aldrin through photorealistic 3D holograms that feel as if they’re in the same room. Buzz is now a pioneer of both outer space and virtual space.”

Initially, “Message to Mars” holographic recordings will be available to the public on Life VR’s mobile app for Google Cardboard. Additionally, Time Inc. will soon distribute a complete Buzz Aldrin virtual reality experience created by 8i, in partnership with Soylent, on HTC Vive and Oculus Rift. An early sneak peek of a scene from the volumetric VR experience will be previewed Thursday at VR on the Lot, a two-day content, technology, and innovation summit hosted by the VR Society and Advanced Micro Devices.

The Hawaii research was led by R&D consulting company SIFT (Smart Information Flow Technologies), and was enabled by 8i. The Mars simulation study began in August 2015 where subjects were isolated in planetary surface exploration-like conditions and concluded their isolation on August 31, 2016. The goal of the experiment was to study the impact of virtual reality to combat sensory and social monotony.

“It has long been understood and empirically supported that humans do not respond well psychologically to long periods of confinement, and one of our goals at SIFT is to study how technologies can be used to counter negative effects,” said Peggy Wu, senior research scientist at SIFT. “We believe the way virtual reality can capture your senses can help astronauts feel more connected to Earth, and offer ways to combat the sensory monotony that result from such prolonged durations of isolation. The preliminary results of this ongoing study has been promising and we’re looking forward to extensive data analysis.”

“Holograms provide a powerful interface for human communication as it gives the viewer the ability to connect with another person in VR or AR as if they were  in the same room,” said Gasking. “We’re thrilled to partner with NASA and Sift on this pilot and honored to build an archive of inspirational holographic messages for future Mars mission astronauts, starting with Buzz Aldrin and Reggie Watts. Our team at 8i is incredibly inspired by the potential use of our technology to give future Mars astronauts the ability to connect with loved ones back home.”

Founded in May 2014, 8i is based in Wellington, New Zealand, as well as Los Angeles.