Nvidia is launching a major play effort to grab the loyalty of hardcore Android gamers with the launch of its Shield Tablet. Using Nvidia’s own Tegra K1 processor, the 8-inch tablet will have two times to four times the horsepower of other available tablets, according to the world’s biggest stand-alone graphics chip maker.

This is Nvidia’s second Shield device. The first is a handheld streaming console which plays Android games but can also send some PC games from a computer to the Shield device. 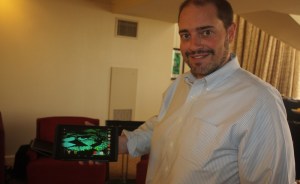 Above: Matt Wuebbling of Nvidia with Shield Tablet

The Android-based device represents a big investment in chips, hardware, software, and games from Nvidia, which wants to be the leader in portable gaming. Nvidia is also launching a Shield wireless controller so that you can play console-like games on the tablet. The products reflect Nvidia’s confidence that gaming on Android will continue to take off and account for the bulk of revenues on mobile devices.

“Android gaming has exploded over the past year,” said Matt Wuebbling, the director of the mobile business at Nvidia, in an interview with GamesBeat. “This is for the millions of gamers out there who also want a tablet. If you are a gamer and you want a tablet, this is the best device for you.”

The device uses Nvidia’s Tegra K1 mobile processor, which has 192 graphics processing cores and five ARM computing cores. The IPS LCD display can support full 1080p high-definition or 4K UltraHD games. It has booming front-facing speakers that are built into the sides of the tablet. It has an optional cover that protects the screen and can be used as a kickstand.

“If you’re a gamer and you use a tablet, the Nvidia Shield tablet was created specifically for you,” said Jen-Hsun Huang, Nvidia’s chief executive. “It delivers exceptional tablet performance and unique gaming capabilities to keep even the most avid gamers deeply immersed anywhere they play.”

I got a good look at the games running on the tablet, and they are beautiful. That includes titles like Portal, Half-Life 2, Pure Chess, The Talos Principle, and War Thunder. 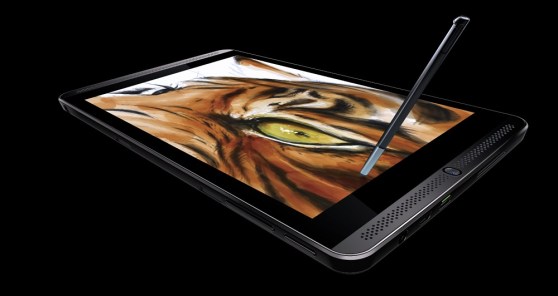 Above: Nvidia Shield Tablet with stylus

Nvidia will continue to make its original Shield device, which shipped last year and will now be renamed Shield Portable.

The company will ship the tablet with a user interface that makes it easy to browse through folders such as Android games, PC games, news, shopping, and media apps. Up to four players can connect controllers to the tablet. And you can watch the images on a big screen TV because the Shield Tablet can connect via an HDMI cable to a television.

The tablet can access games in the Nvidia catalog of more than 400 Android games, which can be played with controllers. In addition, there are 16 PC games, such as Borderlands 2, that you can stream over the Nvidia Grid cloud platform to the tablet. The tablet comes with Trine 2, a pretty 3D game that sells for $20 on Sony’s PlayStation Network. The tablet will have 11 games that will be Tegra K1 exclusive titles at launch. 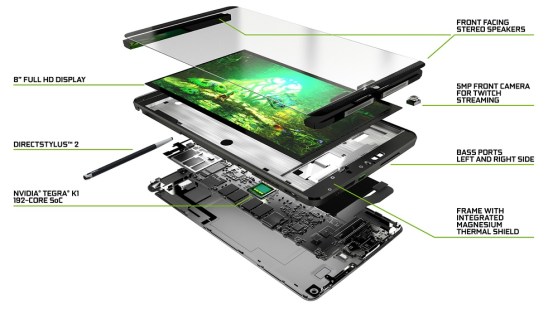 The tablet can launch media apps. If you’re hooked up to your TV screen, you can launch media apps such as YouTube, Twitch, or Hulu. You can play a game and stream the gameplay to the Twitch service for others to watch. It can run Netflix at 1080p resolution, and it has a stylus for pen input. The device can recognize handwriting, and you can paint directly on the screen with the stylus using an app called Nvidia Dabbler. That enables you to paint with watercolors and other special effects.

It has a microSD card slot that supports up to 128GB of flash memory. The battery life lasts for about 10 hours with constant HD video playback.

The Shield Tablet will be available July 29 in the U.S. and Canada, on Aug. 14 in Europe, and more regions in the fall. The $299 Shield Tablet will ship with 16GB of flash memory and Wi-Fi only. For $399, you can get 32GB of flash and LTE mobile connectivity. You can preorder the device now. Physical retail locations are coming but haven’t been scheduled yet. The Shield cover will cost $40 while the Shield Controller will cost $60.

The controller has a cool button with voice recognition. If you hold the button down, you can say, “Watch Iron Man 3,” and the device will start playing the movie.

Nvidia previously developed its Tegra Note 7 tablet. But Nvidia made that device for partners to take to the market. This device will bear the Nvidia brand name.

“This Shield tablet is end-to-end us,” Wuebbling said.

The Tegra K1 chip uses Kepler graphics, and it has features such as DirectX 12 support that are also available on Nvidia’s GeForce Titan desktop graphics chip. But while Titan consumes 250 watts, Tegra K1 consumes less than 2 watts. 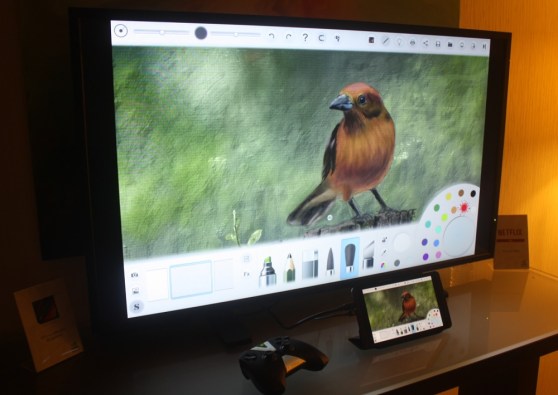 Above: Nvidia Dabbler app on Shield Tablet and TV