If futurist, inventor, and Google executive Ray Kurzweil is right about the future, we’ll all be augmenting our brains with extra capacity in the cloud at some point in the future.

Which sounds exciting, even if a little frightening.

But this very advance could also pave the way for the rich to become thousands of times smarter than poor people, which would likely permanently solidify and even exacerbate current socioeconomic stratifications. I asked Kurzweil if he saw that consequence as a possibility, and he strongly disagreed.

Here’s why I think he might be right about the technology, but wrong about the impact.

Kurzweil has been right, a lot 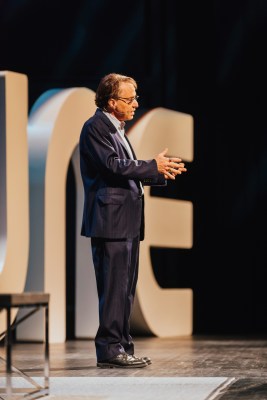 Ray Kurzweil has received honors from three U.S. presidents and 20 honorary doctorates from global universities. He’s built and sold software companies, invented omni-font optical character recognition, built the first electronic music synthesizer of concert-hall quality, and has long been a leader in artificial intelligence. He predicted the rise of the internet, new heights in supercomputers, and narrowly intelligent systems that could beat the best human experts in chess and other games, among 200 or so other predictions, and he’s right about 86 percent of the time.

In other words, he’s pretty smart.

Last week Kurzweil keynoted Postback, Tune’s mobile marketing conference in Seattle (full disclosure, I work for Tune). He described current mobile devices as “pretty amazing, but not what we ultimately want.” Instead, they are just a step along the way. The phones we use today are several billion times more advanced than the computer he first used at MIT 30 years ago, and 100,000 times smaller.

“We’ll do the same thing in the next 25 years,” Kurzweil said. “Computers will be a billion times more powerful, 100,000 times smaller … the size of blood cells.”

That kind of advance, says The Singularity Is Near author, will allow us to provision augmented reality and virtual reality from right within the nervous system — direct silicon to brain integration, not the clunky goggles and hardware we wear on our faces today.

“That will also allow us to connect our neocortex to the cloud,” Kurzweil said. “Not just to do search and language translation … but to actually to extend the capacity of our brains.”

In Kurzweil’s view, the human brain is composed of 100-neuron patterns that are repeated 300 million times.  At some point — probably in the 2030s, Kurzweil says — mobile devices will connect to our brains. More specifically, our neocortex. They’ll be several billion times more powerful than early computers, and they will connect to synthetic neocortices in the cloud. Adding capacity to your brain will be as simple as adding cloud-based server capacity today.

As we do so, our intelligence will grow.

That’s more than a little mind-blowing. And it has implications for everything in human life: sciences, arts, social behavior, you name it. But it also has an implication for socio-economic status.

The richer you are, the smarter you can be

Right now, let’s say that you can personally afford to spin up 1,000 Amazon instances, for argument’s sake. Elon Musk can spin up one million, perhaps. And maybe Bill Gates can spin up 100 million.

What if those instances were neocortices? And what if that equated to how smart or stupid you were?

I asked Kurzweil that question in a private setting immediately after the keynote, and he disavowed it, saying that a girl in Africa with a $30 smartphone has access to the world’s knowledge today, and that spinning up synthetic neocortices in the 2030s cloud would be just as accessible to everyone. And there’s significant truth to that point of view: A rising tide does lift all boats. It’s similar to Elon Musk’s master plan, part one, in which the rich fund development of a luxury electric vehicle and the technological benefits trickle down to a more standard, affordable, mass-market car.

But that’s only true to an extent.

While the girl in Africa with her $30 phone — or the boy in India with his $4 too-good-to-be-true smartphone — has that smartphone, and therefore theoretical access to all of the richness of world learning and culture, it’s not my iPhone 6S or late-model Nexus. And it doesn’t come with unlimited data, or storage, or processing power, or a great camera and internal sensors.

So the tide is indeed rising, but at all levels constantly. The underprivileged classes can’t catch up.

It’s better than it could be, but if this future does actually happen, it’s clear that it will be challenging for those at the bottom of the socio-economic heap to ever make it to the top.

They just won’t be smart enough.