Perhaps with a bit of modern technology, I can give readers a glimpse of a day at Burning Man, visualized through my health tracker, the Basis, which records movement, heart rate, activity, and sleep.

The Basis records my activity, minute-by-minute, and graphs it on a timeline. Usually such data is only for private use, but, in this case, I think it’s a great way to show the public what a typical day is like at the somewhat inexplicable desert festival.

To be honest, the Basis didn’t reveal anything surprising about Burning Man. It’s hot and sweaty during the day, and people dance all night. But it is interesting to see how the day looks in data format.

Below, screenshots of my daily activity are explained with context and pictures from Burning Man.

During The day: bike, explore, eat

There is no need for alarms at Burning Man. The blazing desert heat of Black Rock City wakes up even the most drug-addled burners. I never slept past 8 a.m. And it’s hot: The blue dots in my Basis data represent skin perspiration, which shoots up as soon as I take my bike out from under the shade structure of my camp.

In a pool of sweat, I bike around the two-square-mile main campus, exploring the giant interactive sculptures placed in the inner circle of the grounds (biking is the green shades on my activity data). Burning Man, a temporary city of 70,000, is laid out in an open donut shape, with the most extraordinary art pieces in the middle of a vast dirt expanse.

The only efficient way during the day to get around is by bike, which cuts the commute time between camps and art by more than half. 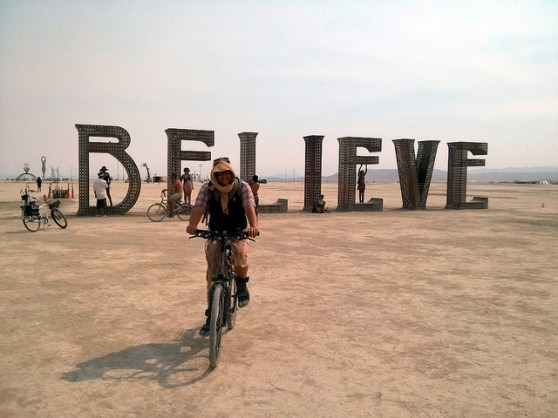 At each pit stop, you’ll notice my steps (the yellow bars) pick up slightly, as I check out the theme camps and art pieces with friends. In addition to interactive art, Burning Man is littered with camps that give out a signature service. Facebook co-founder Dustin Moskovitz’s theme camp, Om Skillet, gives out free grilled cheese sandwiches.

On the spicier side of things, some theme camps offer sexual advice and experiences. Many more offer an open bar and a place to dance. This year, one of my favorites was a makeshift ’80s roller rink.

Many burners spend much of their time exploring the various theme camp offerings or visiting friends staying around the campus. 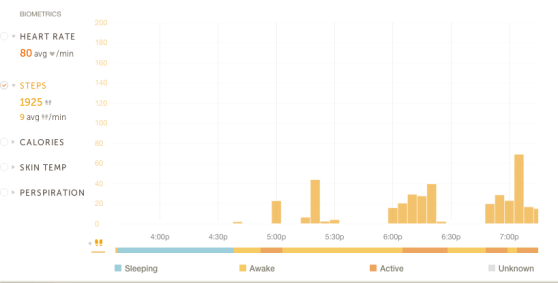 By mid-afternoon, the crushing desert sun has lulled me into a nap (indicated in blue at the bottom). I joyfully sleep through the worst heat in my tent from about 3:00 to 4:30. After visiting camp sites around town for a few more hours post-nap, it’s common for everyone to have a nice long luxurious dinner from 7-10pm (notice, I take no steps for a few hours). 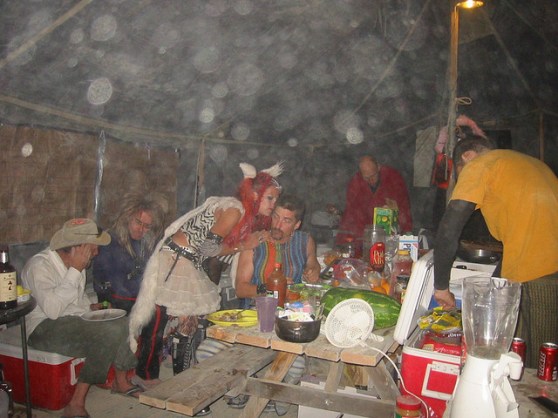 It is the nighttime where Burning Man gets it reputation for being a giant party. The entire inner circle of the city is lined with makeshift dance clubs, thumping electronic music until the dawn.

The three lines represent my experience at night. The red dots at the bottom represent my heart rate. The various spikes over 100 beats/minute show when I’ve reached various night clubs throughout the night until 3 a.m.

The purple dots are my skin temperature and the blue my skin perspiration. The night gets colder toward dawn, but the huddled masses on the dance club keep the whole city sweating to the thumping base of electronic dance music.

Biking, you’ll notice, is absent, because public transit is provided by multistory roving dance clubs, known as “art cars.” I may hop onto a giant two-story fire-spewing metal octopus as it drives at 5 mph down the middle of the street and then jump off when it arrives at the other side of campus. 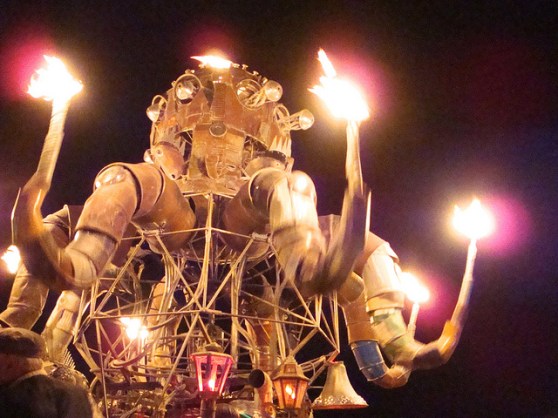 As the night goes on, I hop from dance club to art car until 3 a.m, when I crash for a few hours’ sleep before the blazing sun wakes me up again.

The two big events I could not capture (because my Basis ran out of batteries by Saturday) was silent meditation at “The Temple” and watching the burning of The Man.

Burning Man builds two main art structures. The temple is the spiritual epicenter of campus, where participants inscribe their deepest, darkest emotions. Nearly every inch of the multistory wooden structure is covered with handwritten notes — promises to fulfill a goal, memorials to deceased loved ones, notes to people who have caused hurt. It is simultaneously the saddest and happiest place in Black Rock City. 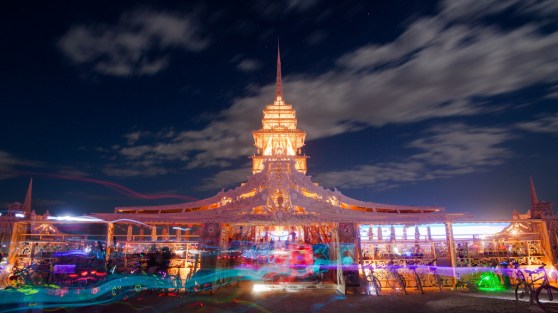 The Man himself is burned at around 9:30 p.m. on the Saturday before the festival ends. Around 60,000 people encircle the giant structure and cheers as pyrotechnics and a firework show burn it to the ground. Then, the biggest party in all of Nevada continues until dawn.

The graphs above are just meant to give unfamiliar readers the lay of the land, in a quantified format that was not previously available. The pictures are taken from Creative Commons images. Out of respect for the people I encountered at Burning Man, I did not post any personal pictures.

With the help of the Internet elite, the Burning Man organization wants to expand its events and arts all over the world. With any luck, you can experience a little slice of Burning Man in your area soon.