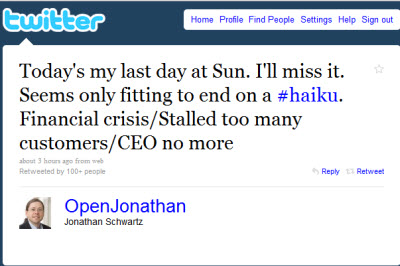 Jonathan Schwartz let the world know about his resignation as the chief executive officer of Sun Microsystems via Twitter.

The New York Times said that Scwhartz was the first Fortune 200 CEO to tweet his resignation. Schwartz did so in a haiku as he exited Oracle, which finished its $7.4 billion acquisition of Sun last week. He wrote, “Financial crisis/stalled too many customers/CEO no more.”

Schwartz was also an early blogger as a CEO, pushing the Securities and Exchange Commission to recognize the blog as an official press release for disclosure purposes. Schwartz had been CEO since 2006, when he took over from Scott McNealy, who remained chairman and who is also expected to resign. Schwartz said he planned to spend time with his family in the short term and get back to work in an Internet-based business in the long term.