It all started with a big announcement from Twice, a San Francisco based eCommerce marketplace for buying and selling secondhand apparel that has grown to more than one million users since its launch. According to the announcement, Ebay had acquired Twice to use its technology in eBay Valet. As a result, Twice ceased operations.

Then Twice released a friendly, professional, well-written “break up letter.” Visibly edited by legal and communications professionals, the letter attempted to soften the blow to customers and portray Twice’s end of operations as a positive, even desired outcome. It, of course, thanked its loyal customers with an expected “we could not have done it without you” lip service line. The message even included pictures of bright accessories to appease fashionista customers’ eyes.

Twice followed its letter a series of liquidation sales that at its highest point reached 50% off. What could be more exciting than a good deal?! Nothing beats a good deal at the end of a relationship that a customer wasn’t ready to end. 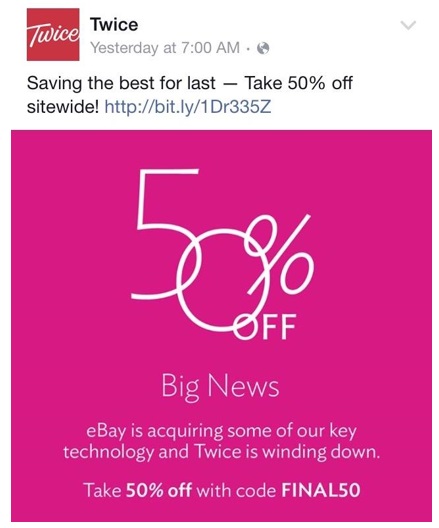 Despite this, Twice customers were not celebrating. Somehow their mood was more of a somber disappointment, in stark contrast to the hype that Twice was projecting through its social media and emails to its customers and followers. The closure of Twice felt a bit more like a letdown than a celebration, and no discount percentage could change that fact.

But Twice’s relationship with its customers didn’t start out this way!

Startups, especially eCommerce startups such as Twice, often begin by trying to create a loyal customer movement, often from scratch. Once startups achieve that initial traction, they focus on quick (preferably exponential and large-scale) growth because their survival in this stage – early, vulnerable, and hyper-competitive for investment money – depends on it. To do this, startups often build a community of engaged product evangelists, championing their customers’ wants and needs in an effort to achieve wide-spread popularity. At this early stage the startups also attempt to deliver edgy product demonstrations, passionately arguing why their new service fulfills a deep need in order to spark buzz and attract loyal paying customers.

Early in the game, startups often focus on earning the customers’ trust because customers who trust are more likely to be loyal, paying customers in the long term. As Jack Ma, founder and executive chairman of Alibaba, the world’s largest eCommerce site, once astutely observed: “Because of e-commerce, we finish 60 million transactions daily. People don’t know each other. I don’t know you. I send products to you. You don’t know me. You wire the money to me. I don’t know you. I give a package to a person. I don’t know him. He took something across the ocean – across the river. This is the trust. We have at least 60 million trusts happening every day.” Clearly, every eCommerce startup must actively engage in trust building efforts in order to succeed in the long run.

The success of creating a movement early, often on a limited budget, by focusing on building exponential and large-scale growth and trust, is what separates successful startups from those we never hear about. As they mature and achieve a certain degree of popularity and vitality, they attract a sizable customer base, their reputation soars, and their brand grows “naturally.” And yet somehow, it’s during this successful stage that startups get distracted with growing pains. They increasingly focus on numerous other stakeholders, often those to whom they owe a legal duty such as their investors. During this stage, startups also get dazzled by the various exit opportunities on the table. It is at this dazzled stage that startups attribute their success to their own brilliance, discounting the important role their customers’ trust has played in their success and growth.

At some point closer to the acquisition, when life is filled with high expectations and professional advice, a startup either realizes that it owes no duty to its customers (at least legally speaking) or forgets about them altogether. This, of course, results in a disappointment usually played out publicly via social media. In the case of Twice, the disappointment was “a real bummer.”

As painful as this disappointment was to follow on social media, one can’t help but wonder whether it is an appropriate treatment of the customers who made Twice what it has become. The acquisition and closing may have been a perfectly legal way to handle Twice’s exit and give the founders a way to monetize their creation, but is it an ethical one? These customers took a risk on a no-name startup in its early days and trusted Twice enough to join their movement. Is letting these customers down an acceptable way to end this relationship? Is a cordial “we couldn’t have done it without you” line enough to thank them for the risk they took, or the disappointment and logistical inconvenience they have experienced?

It will take a few more high profile exit disappointments for customers to catch on and start demanding more from companies, including startups. Even when they eventually catch on, there is a possibility that customers may never be organized enough to take action. However, even though customers may not show it, these disappointments by current startups are making it more difficult for future startups to build their own movements and change the landscape of commerce.

In order to sustain customers’ trust and ensure future success, startups should integrate social responsibility into their exit strategies from day one. As soon as a startup begins their conversation with customers, a thoughtful, responsible exit strategy should be in mind. Customers, with their evolving values and needs, increasingly demand and expect such social responsibility during exits. We can only disappoint them so many times.

Moreover, building in a socially responsible exit from day one will create an ecosystem of trust that will make it easier for future startups to create movements and change the landscape of commerce. No, a socially responsible exit is not mandated by law; it is simply the right thing to do. After all, laws are often a floor, not a ceiling, of proper human conduct. And we should stop pretending that doing the minimum during an exit suffices.