Rumors of a new health-focused wristwatch from Microsoft have been swirling for some time now, and a digital health industry source told VentureBeat that those rumors are true.

What’s more, Microsoft may be in a particularly strong position to capitalize on a health-focused smartwatch, since its HealthVault data platform — which has been in existence for years and just got a refresh on June 10 — is a perfect place to store and use data from the device.

Microsoft has been trying to recruit designers and engineers in Silicon Valley to work on the device, our source said.

This seems to corroborate a late May report in Forbes citing unnamed sources saying that such a watch was in the works, although the report revealed few details of the health applications of the watch.

A patent for the device was filed two years ago. In early May the U.S. Patent Office published a 2012 Microsoft patent application describing a wristwatch with sensors in the band to detect heart rate and other biometrics.

From the application: “When the information device 12 is worn by the user, the light emitter 82 is configured to emit a light into the skin of a user, and the light sensor 84 is configured to sense reflected light from the emitter to measure a biometric parameter of a user.” 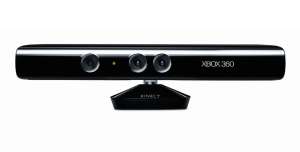 Above: The sensors on Microsoft’s Kinect can detect heart rate based on gradual facial changes while gaming or exercising.

Microsoft has some experience using light sensors for health and fitness applications in consumer products.

The motion sensors in Microsoft’s Kinect gaming interface can detect gradual changes in the users’ faces to measure your breathing, estimate your heart rate, and even figure out your calorie burn rate.

And, sure enough, most of the engineers and designers listed on the health watch patent come from the Xbox group.

Forbes called the device a “surprising development,” but close watchers of the digital health space weren’t surprised. Microsoft has been been working on its HealthVault health data platform since 2007. It has long seemed inevitable that Microsoft would eventually release an integrated health wearable to work with it.

HealthVault offers consumers a place to build a structured record of their health and healthcare over time. Despite its ambitions, it hasn’t been very successful to date. A source told VentureBeat that HealthVault makes no money in the U.S. but has been kept alive because it produces revenue from licensing deals oversees.

But HealthVault may have a promising future. While Apple and Samsung loudly announced new consumer health platforms for their gadgets (HealthKit and SAMI, respectively), Microsoft has quietly been improving HealthVault — perhaps readying it for its own device.

A quick look at the HealthVault home page shows a consumer health data repository that’s positioning itself much like the ones Apple and Samsung are now trying to build.

HealthVault users can now upload personal biometrics data from 233 third-party devices, although 160 of them come from one company, Sinovo. The list of compatible devices also includes several from fitness wearables market leader FitBit.

The devices include blood pressure monitors, peak flow meters, blood glucose meters, pedometers, and scales. Most of these devices require the user to download a Microsoft app called HealthVault Connection Center to connect the device to the platform.

Also, HealthVault announced on June 10 that it had redesigned its website and the HealthVault mobile apps for Windows, iOS, and Android.

Our source says that based on the information coming out of Redmond, and the company’s recruiting activities, Microsoft is still months away from releasing its health wearable.

But once it does, it will add a vital piece to Microsoft’s health data ecosystem. The watch could report biometrics data up into the HealthVault platform, where it can be shared with other apps, and possibly one day with people in the health care system.

That, at least, is what Microsoft envisions, as portrayed in this video:

When I requested an interview with Microsoft executives working with HealthVault Microsoft answered with an email saying “We have nothing to share at this time.”