Welcome to Opening Week! I hope you’re enjoying a new Major League Baseball season a cold beer in one hand and a hot dog in the other. While many of us will never experience the life as a big leaguer, we do have the virtual world to live in thanks to MLB 16: The Show’s Road to the Show mode (read our review) — and I’m here to help you chart your path from the bench to the big leagues as fast as possible.

I’ve found that cracking the big league roster as a position player is much easier than as a pitcher. Pitching, while a considerable amount of fun in its own right, is the most difficult position to play in The Show, much less chart a career with. Since the goal is to get you to the majors as quickly as possible, let’s create a first-baseman with right field as a secondary position. This will allow your soon-to-be manager some flexibility with roster management, which in the long run will help you secure some additional playing time that will lead to more chances to earn XP. 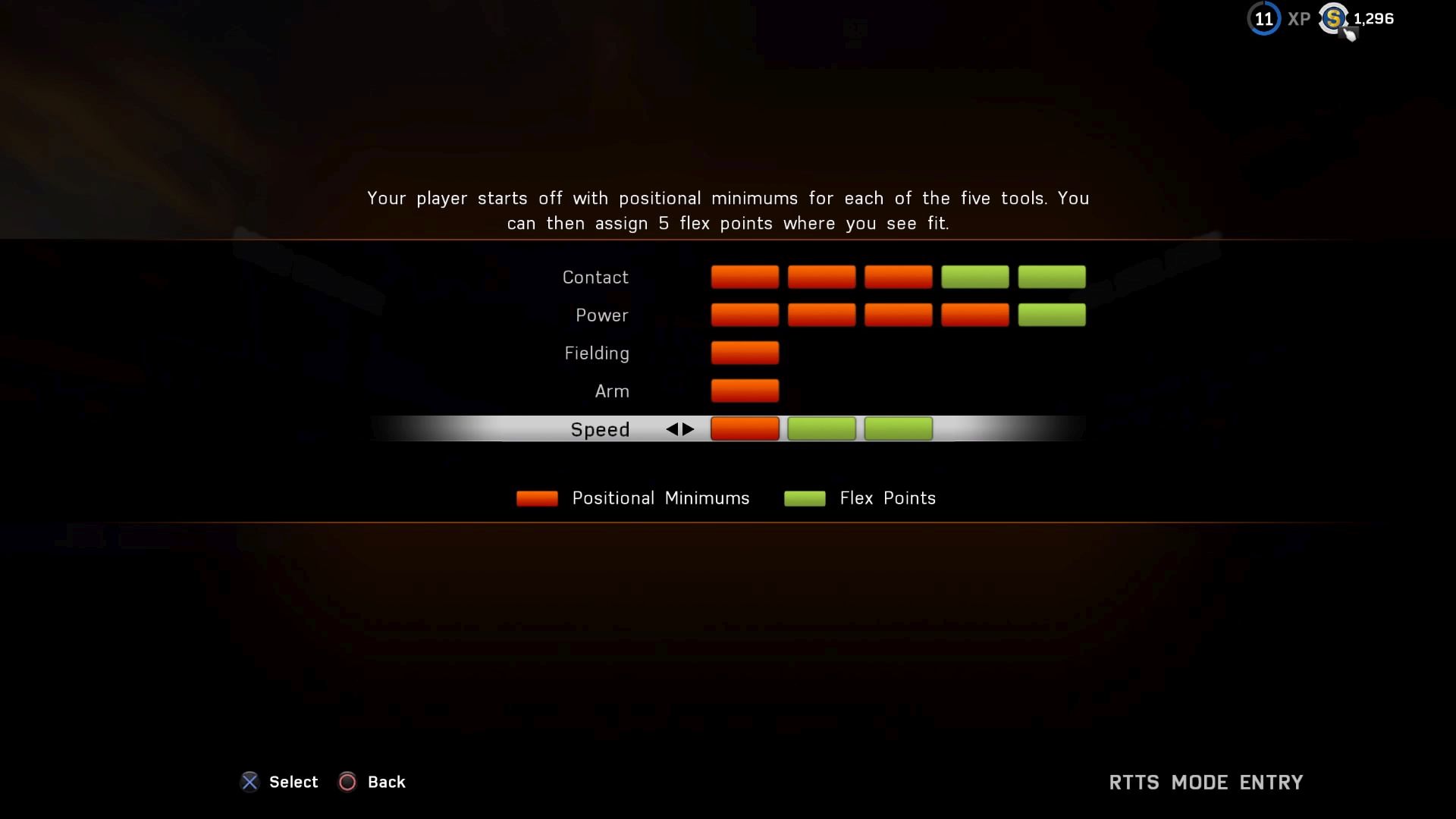 Above: These are the five tools you need to make an All-Star.

Your Five Tools starting attributes, which immediately favor contact and power as opposed to speed or fielding (e.g. shortstop, catcher, etc.), are an added bonus for starting as a first baseman. Now let’s spend the five additional Flex Points on maxing out Power and Contact and put the remaining points into Speed. Don’t worry about Fielding or Arm for now, even though it may open you up to an error or two in the field. We’re focusing on offense, not defense. Besides, the penalty for failing to catch a ball is small when we’re more concerned with creating a player who can knock the stuffing out of a baseball.

Does height and weight matter?

I’ve not been able to find a correlation of success related to your player’s height and weight. I tested this by by creating two identical first basemen who existed at the dramatic end of two variables: maxed height and weight versus minimum height and weight, and simulated each of their first seasons in the minor leagues.

The results, while not a pure science as there are so many variables to consider like batting order, injuries, playing time, etc., initially revealed the taller/heavier player outperformed the little guy in nearly every category. Then I ran the test again with the same players, and the reverse happened. The little guy was outperforming the heavier player.

It may not matter, so go ahead and create the type of player you want to make. Ultimately, it’s your ability to make plays, succeed in training, and effectively spend your earned experience points in some key areas that will have a greater bearing on your success.

It may sound obvious, but the key to success in MLB 16: The Show is to get on base any way you can. Hence, why I created a 1B/RF, as the following Game Perks are all unlocked for you from the start:

You’ll also have 500 extra points to spend before the start of the first Bowman Scout Day (your performance in front of the scouts will be related to your draft position; perform well and you’ll be drafted in the earlier rounds). I recommend you spend 412 of those points to unlock the following Perks before you take the field:

Now that we have a newly created player with six of the early Game Perks related to run production already unlocked. As long as you don’t strike out and you work that pitch count, you should be earning around 14 points per at bat as long as you’re putting the ball in play; around 15 points for getting a walk. Home runs are nice and can net between 20 to 30 points depending how many runs you drive in, but putting the ball in play even if it results as an out is the No. 1 key to success at the plate.

Your approach at the plate

Considering that you get bonus points for the length of your at-bat, you should get a good feel for the strike zone and its relation to pitches coming over the plate as soon as possible. This takes some practice and patience. This is why it’s important for you to take all of the training scenarios during the course of the regular season whenever The Show offers them to you. Not only will you start to get a feel for your approach at the plate, but you’ll also earn some additional training points to help improve your player. 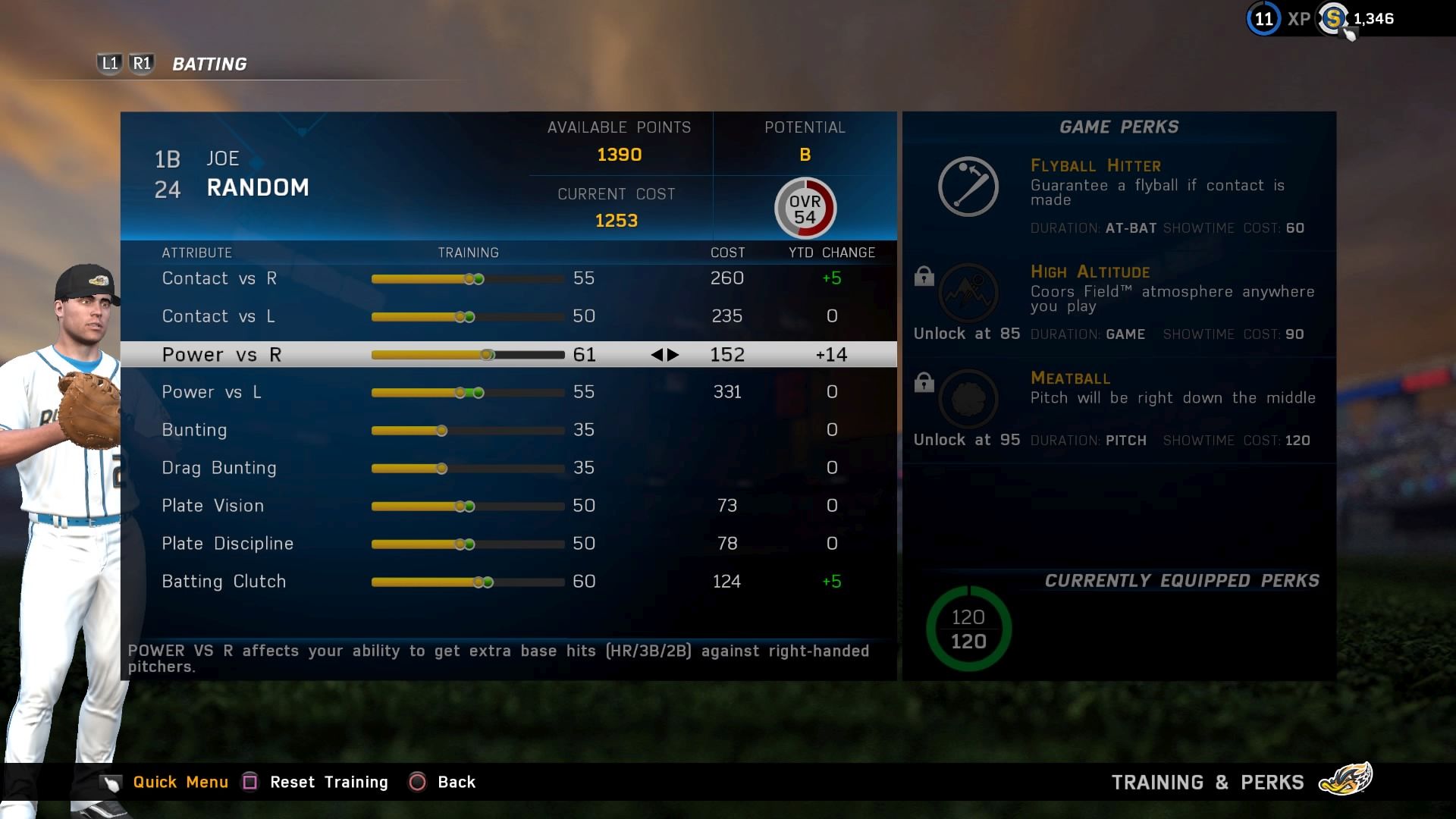 Above: Here’s how to spend your points.

Go ahead and and sim through most of your minor league games, especially with the run-producing monster that you’ve now created, but make sure you play a few games per month to ensure your player is on the right track. I found great success in simulating around 90 percent of the regular season schedule. In fact, Joe Random actually made it to the All-Star Game, and I only played about five to six games!

Also, make sure you check in on your stats to make sure none of them have started to decline. If so, address those areas immediately before you continue to put points into the key stats that you want to be paying attention to in relation to our player: power, contact, vision, discipline, clutch, and speed.

Continued development and making it to The Show

As your career continues and you play more games, the next difficult technique to pick up is determining how a pitcher will face you. If you continue to swing at junk outside of the zone, you better believe The Show is going to exploit this until you can demonstrate an ability to lay off a wicked curveball in the dirt.

This is much easier said than done, as you have fractions of a second to decide to commit to a pitch or not. Sometimes I’d simply put my controller down so I wouldn’t be compelled to swing at the first two pitches, just to get my mind right at the plate. The way I’ve found myself to get better is to take advantage of batting practice in the offseason. You’ll not only be able to accrue additional XP to improve your player, but you’ll also get a great chance to develop your own batter’s eye. 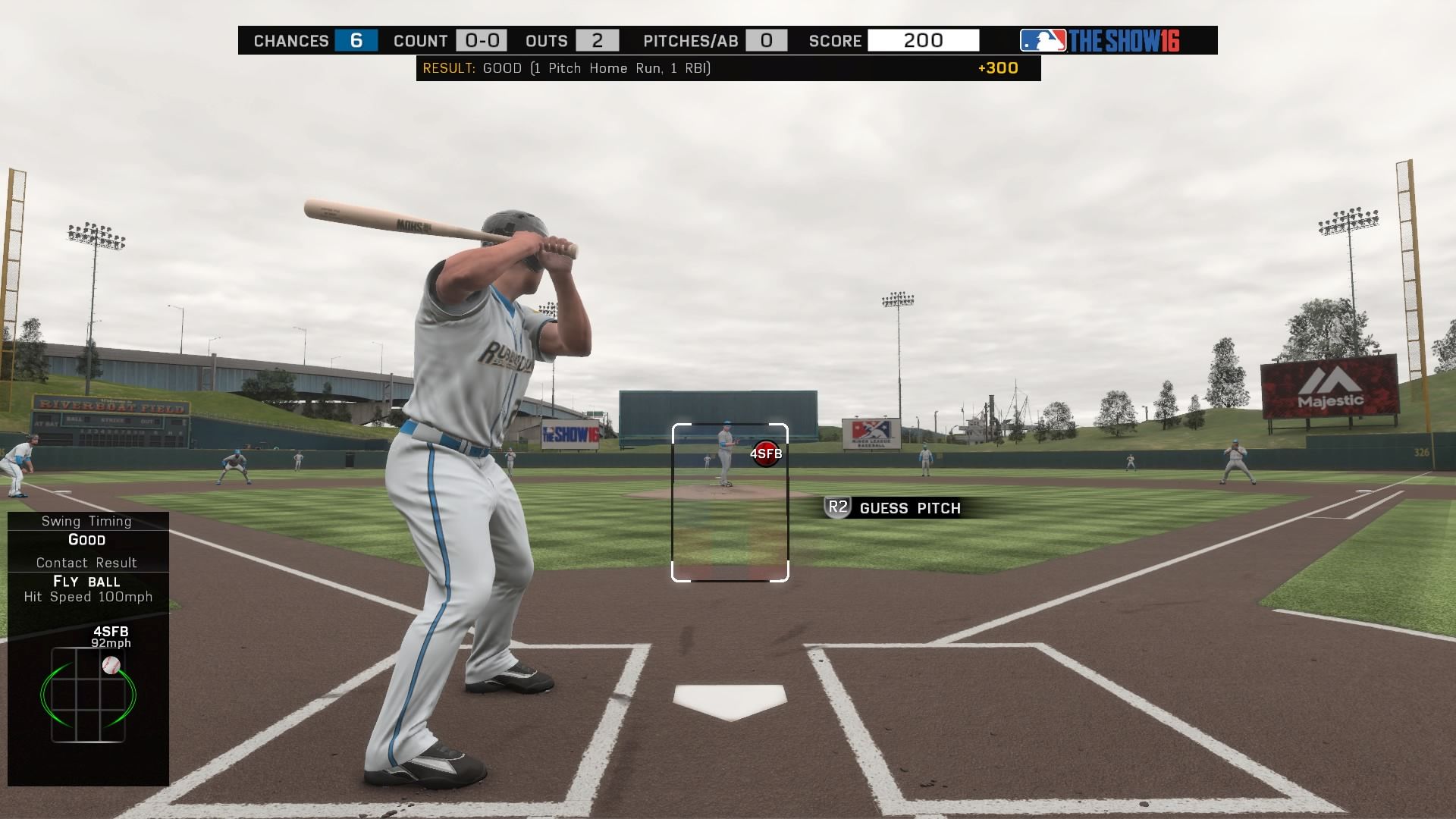 Above: Welcome to Spring Training.

As you approach the end of your first minor league season you should have a well-developed offensive-minded player with an overall ranking between 55 and 60. Going into the offseason, you’ll have an invite to Spring Training waiting for you, and it’s vital that you use it. Your player is in a pretty good spot developmentally, but it’s up to you to show that you can swing a hot bat during the spring. I’d recommend you play as many of your Spring Training games as possible. It will only increase your chances of cracking that opening day roster with a major league ballclub. 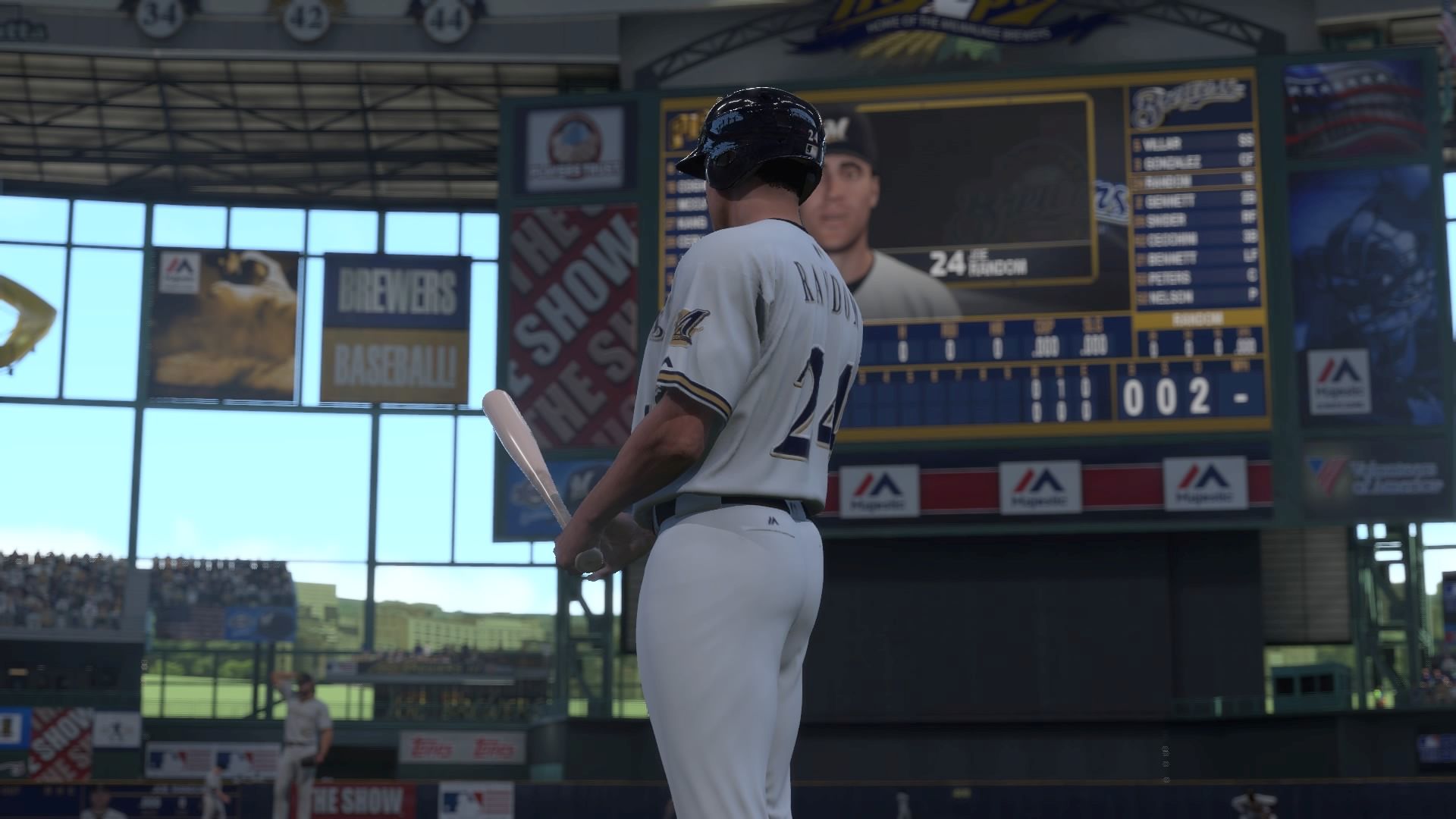 Above: Joe Random makes the majors.

Every player that I’ve created following the profile outline in this article has managed to break through to the big leagues at the end of their first Spring Training. Joe Random, who was featured throughout this article, was traded from the Indians to the Brewers minor league teams in the offseason and cracked the 2017 opening day squad batting cleanup. If, however, you don’t get the call at the start of April, continue developing in the areas we have outlined in this article.

You’ll get the call soon enough.