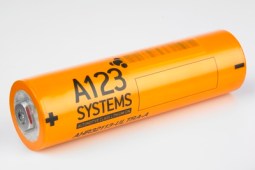 Yesterday, we reported that advanced battery company A123Systems‘ initial public offering would be a bellwether for the rest of the energy storage industry, whether it soared or flopped. With all eyes fixed on its predicted $13.50 share price, the stock (AONE) proceeded to wallop the market, closing at $20.29 a share — a more than 50 percent jump in value.

Clearly this bodes well for the Watertown, Mass., company’s battery-making peers. A123Systems had never even crossed into profitability, and it was able to rake in $378 million in today’s sale — capital it plans to use to build a manufacturing facility. Despite dubious financials, the company expanded the sale from 25.7-28.1 million shares at the last minute. It’s a good day for the cleantech sector, which hasn’t seen a successful IPO so far this year. Industry analysts say that’s one of the reasons for the stock’s wild success — people want to see innovative green companies take off.

Still, A123Systems has little time to celebrate. It needs to figure out how turn recent losses into revenue, and fast. The company reportedly lost $40.7 million in the first six months of 2009. Before that, it lost $81 million in 2008 and $31 million in 2007. Growing by leaps and bounds, it has added staff, acquired new locations — including one near Detroit, Mich., due to favorable tax policies. These developments look like wins but are throwing up even higher hurdles between A123 and a strong profit to show its shareholders.

Another major concern is that its business, at least so far, seemingly depends on the success of the electric car industry. Already, it has scored contracts to supply lithium-ion battery packs to companies like Chrysler and BMW, each working on their own plug-in hybrid-electric model. But none of these cars have been sold — or are even on the market. With roll outs timed for next year, it will be a while before A123 will know whether the EV market will be a viable source of income. Several analysts have already expressed doubt that it will be, guessing that EVs won’t catch on for several years after entering the market.

For this reason, A123 my want to start looking at options for plugging its battery technology into renewable energy systems like wind and solar — avidly looking for solutions to store intermittently-generated power. With utilities finally getting a chunk of government funding to revamp the country’s electrical grid, now could be a good time for A123 and other battery companies like Johnson Controls and Ener1 to fold grid storage products into their offerings.