[Update: As a few readers have pointed out, the S&P 500 index is “float-adjusted.” That means it measures the value of only the shares that are available to the public for trading, rather than all shares. That takes some of the fun out of AAPL passing MSFT on the S&P. Microsoft’s total market capitalization is still bigger.] 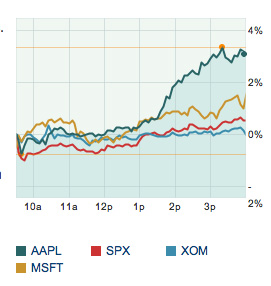 The day we fanboys have waited for is here: Apple finally passed Microsoft in this afternoon’s trading to gain the second-highest value on the S&P 500 index. Apple’s float-adjusted market cap climbed to $242 billion, passing Microsoft’s $239 billion.

Only Exxon Mobil, the energy concern, is valued higher by Standard & Poors, at $324 billion.

Microsoft has its fanboys, too, who are insisting that only the official end-of-trading figures for market cap should be considered in marking this milestone. S&P adjusts its figures according to how many shares “float,” or trade, so market-cap numbers reported by sites like Google Finance will differ.

Apple and Microsoft are close enough now that they’ll probably continue to swap places, as Apple and Google did after Apple first exceeded Google’s market cap. And it would only take a small blip for Apple to beat Microsoft on all possible measures of market cap. But given Apple’s long history of trailing far behind Microsoft in value, it’s a noteworthy milestone.

It’s seems hard to believe now, but in 1997 Microsoft invested $150 million in Apple, when the company was worth around $2 billion. Those shares would now be worth $18 billion. That’s enough value on the books to give Microsoft a comfortable lead over Apple today. But then-CFO Greg Maffei reportedly hedged Microsoft’s bet by shorting an equal amount of Apple stock. If that’s true, then Microsoft never made a dime off the deal.

Update 2: Dan Frommer at Business Insider reposted a chart below that shows what’s happening between the two companies.