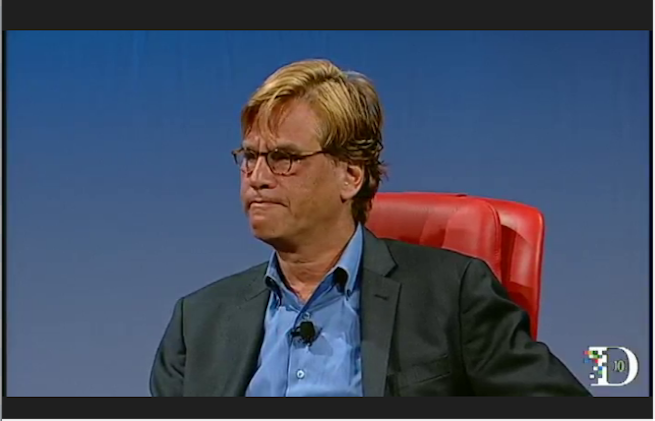 Hollywood writer Aaron Sorkin says Steve Jobs was a complicated guy, but knows that he will write the late Apple co-founder as if  he was “making [his] case to god for why [he] should be let into heaven.”

Sorkin, who is known for having characters walk with purpose while simultaneously engaged in witty repartee, sat down at the D10 conference in Rancho Palos Verdes, Calif. to chat about his upcoming movie about Steve Jobs.

“I’m at the earliest possible stage with Steve Jobs,” said Sorkin at the conference. “It’s a process of procrastination where you try to figure out what the movie is going to be about … I’m going to identify the point of fiction that appeals to me and dramatize that.”

Sorkin, who just wrapped up a fictional show that takes place behind-the-scenes in the news industry, is adapting Walter Isaacson’s biography of Jobs, which was hugely popular after Jobs’ passing from cancer in October 2011. There will be obvious challenges turning the biography into a movie, and Sorkin admits he had reservations taking the project on. He explained that it “was a little like writing about the Beatles. There are so many people out there who now so much about him … I just saw a minefield of disappointment.”

Sorkin has taken an interest in the drama that often unfolds in Silicon Valley, and adapted it to the big screen. He first did this with The Social Network, a movie based on the life of Facebook’s Mark Zuckerberg. The drama in that flick surrounded the ownership of Facebook, a debate that has led to many lawsuits between Mark Zuckerberg and others who claim they helped him create the now public company. Sorkin wound up winning an Oscar for writing the screenplay.

The actor that will eventually play Jobs has to be a smart person. Sorkin explained that there are a number of things you can fake as an actor, but intelligence isn’t one of them. In classic Sorkin style, the actor will also have to be a fast talker. But even if his movie is a flop, he believes people are naturally interested in the man who made Apple what it is today.

“I think that what has captured the public’s attention about Steve Jobs … is that he made things. I think nowadays we’re being told a lot that as Americans, our future is somehow in service. That the days of making cars and railroads and big buildings … that those days are over. Steve Jobs said no, they’re not. We still make things that people want. And we do that in Hollywood too.”