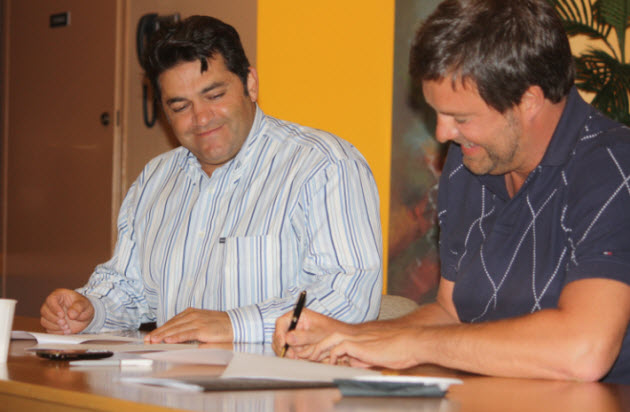 On Tuesday, the Plug and Play Tech Center, a Sunnyvale, Calif.-based startup incubator, inked a deal with the government of Belgium to help connect entrepreneurs from that European country with Silicon Valley.

Often, the international competition for jobs is framed as a zero-sum game. But the Plug and Play Tech Center has figured out a way to spread the region’s risk-embracing culture to overseas entrepreneurs. And that can lead to jobs in both the U.S. and abroad.

With Belgium’s government research institute, IBBT, Plug and Play Tech Center will screen dozens of startups and bring 16 of them into its building for stays of three months or longer. During that time, it will introduce them to all sorts of movers and shakers. The introductions are a big attraction, since about 40 percent of the world’s VCs are located within driving distance. More than 100 VC firms make trips to the Plug and Play Tech Center every other month.

The Plug and Play Tech Center incubates startups in its Sunnyvale headquarters and various satellite locations. Its mission is to immerse startups in entrepreneurial culture and accelerate them by giving them space and access to other entrepreneurs, venture capitalists, angel investors and high-tech executives. There are now more than 250 startups in the Plug and Play Tech Center’s buildings and more than 50 of them are international companies that were founded elsewhere.

The international focus started two years ago, amid the onset of the recession. It was a way to fill space in the buildings, but it was also a way of going full circle for Saeed Amidi (pictured, top left), chief executive of the Plug and Play Tech Center. Amidi is an immigrant himself who moved to Silicon Valley from Iran in 1979, after the Iranian Revolution. His family started a Persian rug store in Palo Alto, Calif., and then moved into real estate.

The international focus is keeping the buildings full at a time when many are vacant. The company now has 20 agreements with overseas governments and institutions to accelerate international businesses by immersing them in Silicon Valley’s entrepreneur culture. It also has alliances with dozens of venture capital firms, universities, and major corporations such as Hewlett-Packard. 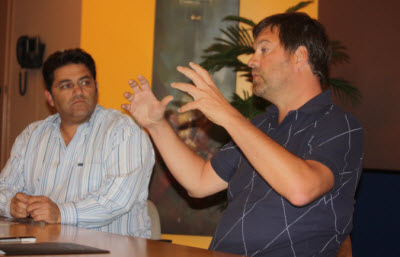 “The world is hungry for innovations and startup culture, Silicon Valley style,” Saeed Amidi said. “There’s a global paradigm shift, where small and medium-size companies are going to change the economies of the world. That’s also going to be good for Silicon Valley, because they will come here to be accelerated.”

He added, “Before, we used to import students that were incredibly smart to schools like Stanford. They started companies like Google. Now, we import the students, the technology, and even late-stage startups that have begun somewhere else. I believe this model will happen again and again, because companies are thinking globally.”

For the dozens of international companies in the ten international pavilions at Plug and Play, that’s true. They keep their engineering teams in their home countries, generating lots of jobs there. But they come to Silicon Valley for fundraising, business development, sales and marketing. That has happened with Amidzad portfolio companies such as Business Objects, which has more than 700 employees in Paris and 350 in Silicon Valley.

“During the downturn, most governments have kept up their investments in startups because they see it as a way to stimulate the economy,” said Carlos Baradello, associate dean for corporate and international programs at the University of San Francisco. “They come here, get accelerated, and now both countries create jobs. That is making the pie bigger for everyone.”

Belgium’s government invests around $40 million a year in companies spawned by its research institute. Wim De Waele (pictured above, right), chief executive of Belgium’s IBBT, said, “I believe our companies can be successful if they think globally and invest in marketing and their network ecosystem abroad. Silicon Valley is a hub for the technology business and we all look to it for what can be achieved.”

Christian Koestler, managing director and executive vice president for North America at Lixto, said his “price intelligence” company got started in Vienna, Austria. But he participated in the Austrian government’s program with Plug and Play and moved to Sunnyvale along with 20 other Austrian startups. It took about a week for him to realize that Silicon Valley was the place where he had to set up business operations, Koestler said. His company employs 20 in Austria and 5 in Silicon Valley.

“I didn’t believe Saeed at first, but now we are doing business as a Silicon Valley company and we have a completely different perception in the market,” he said.

The Amidis now have a $200 million venture fund, and they play to open five Plug and Play Tech Centers overseas. They expect to have one in Singapore by the end of the year and will likely open others in the Middle East and in Europe.