With so many marketing tool out there, many new suites focus on helping marketers make the best use of their resources.

One suite-in-development — marketing optimization platform Accomplice — today announced it has landed $5 million to offer a lower-priced way to fine-tune campaigns.

Previously known as Fractal Sciences, the San Francisco-based company expects to launch its product in April following a beta phase that started in the middle of last year.

“With more and more channels,” president/chief data scientist and cofounder Brian Lewis told me, “you find yourself with 10 different tools.”

The challenge, he said, is to “bring those tools together in a more comprehensive way” so marketers have a single workflow and campaigns are completely synced with business goals.

The Accomplice platform offers social media campaign tools, website user tracking, Facebook and Google ad creation and placement, and other capabilities, all of which you can track according to what you’re trying to do.

Metrics include downloads, purchases, content interactions, and registrations. In the current demo version, goals include “increase following,” “promote my mobile app,” “clicks to website,” and “website conversions.” Lewis said other preset goals will be available at launch, and users can create their own as well.

The idea, the company said in its funding announcement, is to “connect the dots” between content, social media, ad campaigns, and what the business wants to accomplish.

“What you learn from your paid ads can influence your social” campaigns, Lewis noted, and attribution analysis — which efforts resulted in which sales or user actions — is baked into the platform’s approach. 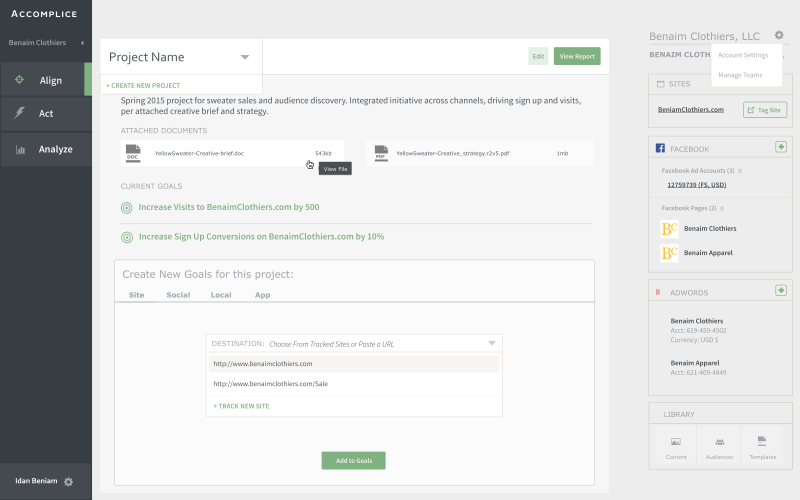 Above: A goal-setting screen in Accomplice

While the offered toolset at this stage is not as extensive as some marketing platforms — it has no website-personalization functions or A/B testing, for instance — the selected set of tools are designed to be closely tracked by performance.

That orientation, for instance, is behind Accomplice’s capability to quickly set up dozens or even hundreds of Facebook ad campaigns — and to rapidly determine which ones are the winners.

Lewis said that, while individual features of the emerging platform have a number of competitors, he sees the competition as being the big marketing cloud players, like Salesforce, Adobe, and Oracle.

Although it has far fewer features that those big heavyweights, Accomplice also has a lower price point — starting at $249/month for unlimited users and higher tiers based on ad spending and number of web events.

The Series A funding, which included investment from talent and literary agency WME | IMG, brings total funding in the company to $7 million since its founding in 2013. Lewis said the new money will be used to continue platform development, redesign the user interface, and prep marketing efforts for the launch in the spring.