How excited is the Internet about Watchmen, the movie based on the classic graphic novel that opens today? Really, really excited, at least if Twitter is an accurate gauge — the number of messages on the micro-blogging site about Watchmen has shot past the numbers Slumdog Millionaire saw when it won the Best Picture Oscar, as well as messages about the film adaptation of the bestselling teen vampire novel Twilight.

You can get a general sense of that popularity by looking at the Twitter trends list featured on the site’s main page, where “#Watchmen” is one of the most popular terms. Trendrr, a social media tracking service from digital marketing agency Wiredset, provided some specific numbers. It shows interest peaking (so far) at more than 17,500 Watchmen-related Twitter posts per day. 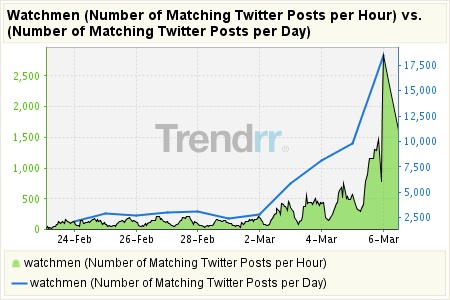 The graphic novel by Alan Moore and Dave Gibbons has been a mainstay on best-seller lists and saw a big boost after the movie’s trailer premiered with monstrously successful film The Dark Knight. This weekend, we’ll see if the masterful-but-deeply-weird story of sad sack superheroes in an alternate history of America will make sense to a mainstream movie-going audience. Movie critics seem deeply divided. 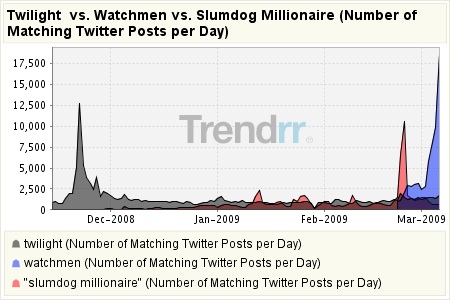